Alice laughed. “There’s no use trying,” she said. “One can’t believe impossible things.”

“I daresay you haven’t had much practice,” said the Queen. “When I was your age, I always did it for half-an-hour a day. Why, sometimes I’ve believed as many as six impossible things before breakfast.” 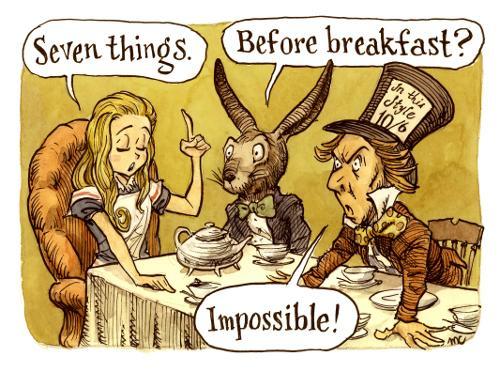 I hope the readers will forgive a little self-indulgence on my part if I relate an anecdote from the tail end of my 12 years as a junior doctor in the early years of the first Blair government. At the time, the Health Secretary Alan Milburn (advised by the youthful Simon Stevens) had issued strict waiting time targets to all hospitals.

I was tasked with sorting out the numbers of patients on the surgical waiting lists at a large teaching hospital. It became apparent that if a patient had a date for surgery, they were no longer counted as ‘waiting’, even if that date was many months in the future. Accordingly, I issued dozens of patients dates for surgery and achieved compliance with the waiting time targets at a stroke.

There was just one problem. Both the managers and I knew that all those patients had virtually no chance of getting into the hospital on their designated dates. Due to lack of available beds, they would all be cancelled a couple of days before admission.

At a meeting with the CEO of the Trust, I pointed this out.

He looked me in the eye and said, “Let me make one thing clear to you. There is no problem with beds in this hospital.”

I briefly considered debating the assertion, but realised it was a pointless endeavour.

The facts did not fit the Chief Executive’s preferred narrative – so the facts had to change.

He was subsequently awarded a Knighthood for services to healthcare.

And so, here we are twenty years later – still believing six impossible things before breakfast.

Here is my first example where a target failed to be matched by real world data. When considering facts there are three basic components. Understanding the collection process and the inherent errors and bias within that, the interpretation process, during which there will be a range of opinion, (although currently only one viewpoint is permitted) and finally presentation of the data which is open to the greatest amount of bias.

Graph 1 shows the actual number of patients admitted with COVID from the community in June (orange bars). The blue line indicates where SAGE predicted it would be as a consequence of easing lockdown restrictions. How annoying – the data does not correlate with the prediction. In fact, hospital admissions are stubbornly refusing to increase significantly. 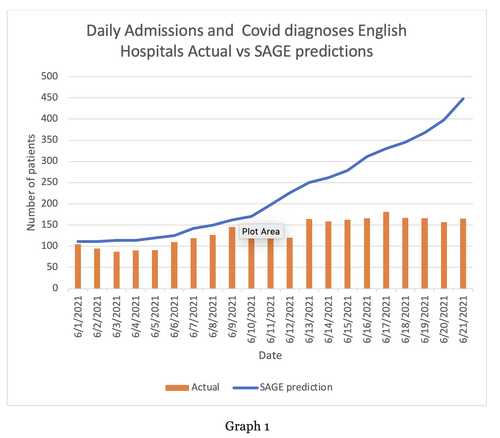 Never mind. If we simply state loudly that something nasty ‘could happen’ in the future that will cover just about every situation where the observable data do not support the required conclusion. And we can also show Graph 2 – which records the number of positive ‘cases’ in May-June 2021. The public won’t realise that most of these cases were asymptomatic and they may well think that they are the same as people being admitted to hospital. 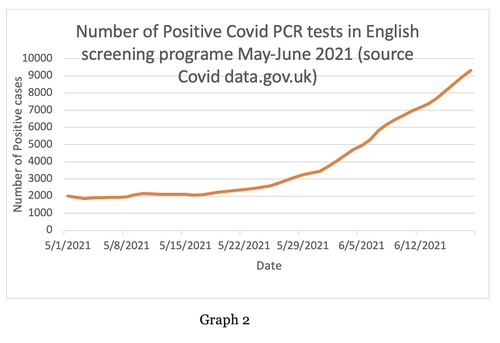 We should try not to show Graph 3, which puts the recent rise in ‘cases’ into its proper context. Graph 2 better supports the preferred narrative, so that is the preferred one to show at press conferences. By presenting the data in this way, we are not actually lying, just presenting to the audience the information that supports our preferred outcome and not referencing information that does not support our narrative. You may very well think this is misinformation. I could not possibly comment. 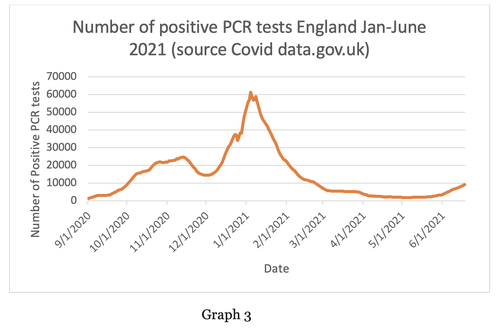 Second on my list of six is the Vaccine Minister, Nadim Zahawi. Before entering politics, Mr Zahawi ran YouGov, the political polling company. At the Government press conference on June 23rd, Mr Zahawi claimed that delaying the final milestone of ‘unlocking’ on June 21st had saved “thousands of lives”. How did he arrive at this statement?

A recent PHE document had this to say about the number of lives saved by the vaccines:

Did Zahawi simply parrot the PHE estimates up to May 30th, wrongly using them as an estimate of the effect of delaying unlocking past June 21st? Is this a simple misattribution error on his part, or a deliberate attempt to mislead? I note that none of the bovine journalists in attendance at the press conference challenged him on these implausible figures. On the contrary, his assertion was obligingly retweeted by Beth Rigby from Sky.

I also note the heavy skew in prevented deaths to the older age group. Presumably, that’s because the more vaccinations are given to younger people, the Number Needed to Treat (NNT) to prevent one death goes up substantially. Based on recently published analysis of the Israeli experience, the NNT across the whole population was 16,000. Zahawi asserted that as of June 21st there were two million people over 50 who had only had one dose – let’s be generous and assume all these two million either are or are going to be vaccinated in the period between June 21st and July 19th. Using the real-world Israeli experience, this gives a predicted prevented death number attributable to vaccination of 125 for the period June 21st-July 19th (and that may be a substantial over-estimate).

Would Zahawi have been so cavalier with the facts if he had been giving a statement to the House of Commons? Is his carelessness with attributing statistical estimates a reflection on the practices of YouGov? The reader can decide for themselves on the second impossible thing before breakfast.

My third impossible belief is the assumption that people working for the government or supranational bodies such as UEFA or the G7 are either not susceptible to COVID infection and are therefore excused the requirements for regular testing and quarantine, or too important to be inconvenienced by the regulations for normal people.

Kate Andrews writing in the Spectator has helpfully outlined various ‘pilot schemes’ by which Government figures and other privileged people can move around the globe freely on the basis that their activities are more important than those of the people who elect them. Here is the official extract in relation to exemptions from the regulations.

How plausible is it that such arbitrary exemptions to the ‘rules’ will be limited to the Euro football competition or the G7 meeting? Isn’t it more likely, that, over time, the rich, powerful and well connected will be able to obtain exemptions? Maybe held on a mobile phone app for example as a ‘super vaccine passport’ allowing them to travel freely, unhindered by the majority of the population prevented from free movement by regulatory cost and red tape.

My fourth impossible belief relates to the data on COVID spread at mass gatherings and positive test ratios on people returning from overseas travel. Here is the link to the Events Research Programme report published on June 25th I encourage readers to explore this document in detail for themselves and discover the depth of population monitoring and control it contains. I find it deeply sinister.

The headline figures are that out of 58,000 people attending nine events, a total of 28 positive PCR cases were recorded (0.0005%). This has been reported in the press as good news from the perspective of re-opening public mass events and indeed it is.

But delve deeper into the actual report which heavily caveats the results and recommends ongoing and more in-depth surveillance. Against a backdrop of a population antibody positivity of 80% (ONS statistics), with 60% of the adult population having received two jabs and over 80% having had one, the idea that surveillance of this type has anything to do with protecting public health seems completely implausible to me. Mark Harper MP, chair of the COVID recovery group thinks it is implausible as well – on June 16th he tweeted: “Documents I have seen confirm that work is underway in Govt to plan for Covid restrictions this autumn and winter.”

My fifth impossible thing happened yesterday, Saturday June 26th. An enormous crowd marched from Hyde Park to Parliament Square with only the most cursory comment from the national broadcaster – and that attributed it to multiple protesting groups, rather than anti-lockdown protestors. If I hadn’t been there, I would not have believed it. I’m not a natural demonstrator – only ever attended one previous protest in 1984. Today convinced me that if there is a route out of this crisis, it will be by direct political action. What limited coverage there has been on the mainstream media has claimed the anti-lockdowners on the march were led by Covid deniers and anti-vaxxers. There is no doubt that some people on the protest were carrying such banners, but the vast majority were normal people, similar to myself. The frustration and rage at the deceptions and propaganda practiced by our elected representatives and salaried state servants were palpable. I’m already looking forward to the next one.

Last on my list are the actions of the recently departed Health Secretary. According to his press statement on Friday June 25th, Mr Hancock believed that his recent indiscretion captured on CCTV with his close personal assistant was a purely private matter. Much has already been written in the press and on social media about this issue and I will not add to the commentary, except to suggest that if Mr Hancock really does believe his personal conduct is a purely private matter, we really are through the looking glass.

Anyway, he’s gone and the prurient speculation around Hancock’s sexual activities are quite irrelevant to our main dilemma, the root of which lies in the dysfunction of government in a ‘managed democracy’. We are in a position where the skills and attributes needed to get elected are totally divergent from the skills needed to govern well. Elected politicians have become PR spokespeople for their factions, while unelected and unaccountable career civil servants actually run the process. Having spent my entire career observing such characters at work in ‘our NHS’, that’s something to be very worried about.