“Just Another Summer Weekend Of Mayhem”: 77 Shot In Chicago As Understaffed PD Braces For July 4th

“Just Another Summer Weekend Of Mayhem”: 77 Shot In Chicago As Understaffed PD Braces For July 4th

Even after for months running Chicago has typically seen many consecutive weekends with some 40 shootings every Saturday and Sunday, this weekend’s numbers have reached truly staggering new heights, with at least 77 people shot by Sunday night, including five killed.

Local Chicago news has noted further that seven of the surviving victims are minors of 17-years old or younger. From Saturday night, news of shootings came in so rapidly that police and reporters struggled to keep a tally, with Chicago PD citing 55 wounded across the city by Sunday evening.

But after two more “mass shootings” into Sunday night, by Monday morning CBS News channel 2 reported “At least 77 people had been shot this weekend in Chicago as of Sunday night, and five of them had been killed.”

The first killing occurred Friday night or into the early hours of Saturday, as police discovered a man with a fatal gunshot wound lying on a sidewalk at 4:36am Saturday. 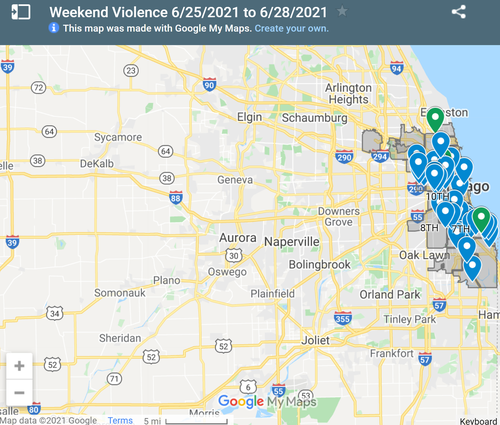 The vast majority of the crimes remain unsolved with few suspects in custody, according to reports.

The first of what police dubbed a mass shooting occurred Sunday night, detailed as follows:

Late Sunday night, the Fire Department said eight people were struck, one fatally, in a mass shooting at 63rd Street and Artesian Avenue in Chicago Lawn.

The shooting happened at 10:53 p.m. in the 6300 block of South Artesian Avenue, police said. The Fire Department called an EMS Plan 2 for the shooting, sending 10 ambulances to the scene.

One woman died of her wounds while other victims ranging in age from 21 to 57-years old were wounded.

The second mass shooting was reported as follows:

Also Sunday night, a mass shooting on 71st Street near Clyde Avenue in South Shore left a woman dead and five others wounded. Police said at 8:44 p.m., a woman and four men were all standing outside when a black sport-utility vehicle passed by and someone inside shot them all.

The woman was rushed to the University of Chicago Medical Center in critical condition and was later pronounced dead there after being shot six times.

Meanwhile, a concerned citizen has been tracking some appalling statistics… 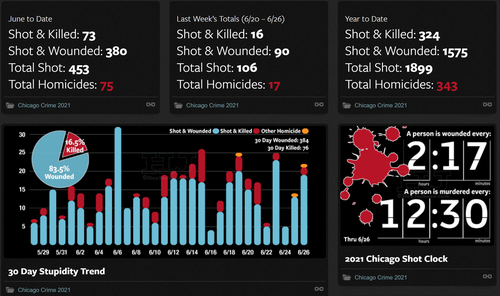 One anti-crime activist Pastor Donovan Price of Street Pastors, was cited on one local report as saying, “Hundreds of people looking around, onlookers, family members, people who are injured. Just another night of mayhem in Chicago, summer night. It shouldn’t be like this, it shouldn’t be like this, but unfortunately, it looks like this may be our summer, definitely going to be our Fourth of July.”

Meanwhile, Chicago PD continues to be understaffed compared to the soaring numbers of unsolved violent crimes across the city…

Shocker alert!🚨
If the governor signs that new “reform” bill, the rest will follow.

In Chicago, other cities, more cops are calling it quits, retiring amid anti-police backlash https://t.co/zjOy6V1wgY via @SunTimes

Indeed the windy city is bracing for what’s expected to sadly be another hot and deadly July 4th weekend coming up. Last July 4th, 2020 there were 89 total people shot, including 17 fatally.