S&P500 futures paused at fresh all time highs in a subdued session as traders eyed central bank support and awaited the June jobs report due Friday. European stocks dipped as new travel restrictions prompted by the Covid-19 Delta strain spurred a re-think of the reflation trade. The dollar and oil posted modest gains.

Contracts on the Nasdaq 100 led gains while the S&P 500 fluctuated following the best week for the underlying gauge since February following an agreement on President Joe Biden’s $1.2 trillion infrastructure spending deal (which however may prove to be a total dud) and waning concerns about a sooner-than-expected policy tightening from the Federal Reserve. At 730 a.m. ET, Dow e-minis were down 17 points, or 0.05% S&P 500 e-minis were up 3 points, or 0.08% and Nasdaq futs were up 42.50 ot 0.29% as FAAMG megacaps edged higher in premarket trading despite higher bond yields. 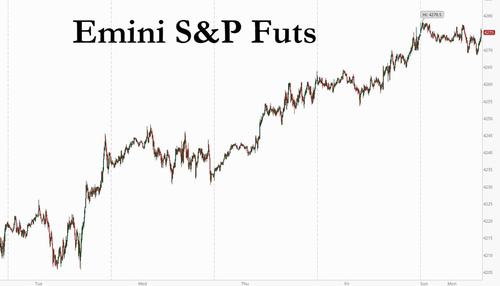 Cryptocurrency-exposed stocks climbed in US premarket trading with Bitcoin and other digital currencies spiking overnight, pushing bitcoin to $35,000 and Ethereum back over $2,000. Boeing fell 1.4% after the FAA told the planemaker that its planned 777X is not yet ready for a significant certification step and warned it “realistically” will not certify the airplane until mid- to late-2023. Virgin Galactic extended gains amid continued Reddit chatter, and Intellia Therapeutics surged after reporting positive results on Saturday from a clinical trial. Here are some other notable U.S. movers today:

Both the S&P 500 and the Nasdaq hit record levels last week. But the tech-heavy Nasdaq’s 4.4% gain is outpacing its peers in June as investors pile back into tech-oriented growth stocks on waning worries about runaway inflation. Still, tensions remain as Bloomberg notes, with highly-contagious strains of the virus threatening to derail the return to normal, while markets remain sensitive to more central banks debating the withdrawal of emergency stimulus.

“The fact central banks keep on providing considerable support to markets remains a solid bullish market driver and justifies the ‘risk-on’ approach,” said Pierre Veyret, technical analyst at ActivTrades. Traders “already have their eyes towards upcoming macro data” like the jobs report and the earnings season coming up soon.

“Liquidity is still everywhere and that, for now, will support stocks,” said Charles Diebel, head of fixed income at Mediolanum International Funds. “But I think the market is in an unstable equilibrium right now. The FOMC have signalled they will be more proactive but equally, dislocations in the supply chain will keep price pressures evident.”

Quarterly results from Micron Technology, ConocoPhillips and Walgreens are slated for this week. On the economic front, attention will be on consumer confidence data, a private jobs report and a crucial monthly nonfarm payrolls report.

Switching continents, European stocks were dragged lower by travel and leisure stocks, with the Stoxx 600 index trading down 0.2%, cutting it earlier losses in half. Travel stocks underperformed as Portugal and Malta, popular tourist destinations for U.K. travelers, provide updates on vaccine requirements: the Portuguese government said passengers arriving from U.K. must isolate for 14 days if not fully vaccinated, according to the official government gazette. Meanwhile, from June 30, only fully- vaccinated persons can travel to Malta from the U.K., Malta’s Department of Information says by email following report in Telegraph newspaper at weekend. Tour operator TUI fell 3.5%, other movers included airline EasyJet -2.6%, British Airways-owner IAG -2.2%, Ryanair -2.1%, Hotelier Accor -1.9%, peer IHG -2.2%.

Here are some of the other biggest European movers today:

Earlier in the session, Asian equities fluctuated in a narrow range as investors awaited fresh signs on the health of the reflation trade while monitoring the latest moves around the region to contain the coronavirus; Southeast Asian markets underperformed, led by Malaysia, where a nationwide lockdown was extended.  The MSCI Asia Pacific Index swung between a loss of 0.2% and a gain of 0.1%, with volumes on most major gauges 20%-40% below 30-day averages. Hong Kong stocks dipped after morning trading was canceled due to a storm; later in the session Hong Kong said it will ban all passenger flights from Britain starting Thursday. Malaysia’s benchmark fell more than 1% as the nation moved to extend a nationwide lockdown that was originally due to end Monday. Indonesia’s main index fell by a similar amount, while Vietnam’s rose more than 1%.

The rotation since late last year into value stocks expected to benefit from economic reopenings has shown signs of strain recently after the Federal Reserve signaled it’s preparing to slow stimulus. MSCI’s gauge of Asia Pacific growth stocks has outperformed its value counterpart over the past six weeks. “Growth may continue to do well in the near term as value crowding unwinds somewhat further,” JPMorgan Chase & Co. strategists led by Mixo Das wrote in a report. “A mid-cycle transition, though, is not bad for markets overall.”

In rates, treasuries trade near session highs as US trading gets under way, with 5- to 30-year yields lower by 1bp-2bp inside Friday’s ranges.  Yields are lower by ~1.5bp from 10- to 30-year sectors, 10Y at 1.51%; last week’s 8.6bp increase in 10Y yield was its biggest since March. Futures volumes have been below average so far Monday with no major economic data and a few Federal Reserve speakers scheduled. Focal points include corporate new-issue calendar, where Qatar Petroleum has mandated banks for amulti-tranche offering. Treasury note and bond supply is on hiatus until mid-July, and Fed targets 10- to 22.5-year sector in daily purchase operation. Focal points for Treasuries later this week include month-index bond index rebalancing, projected to extend Treasury index duration by 0.08yr, and June employment report on July 2. Super- long Japanese bonds erased losses toward the end of the session after selling made them attractive.

In FX, the Bloomberg Dollar Spot Index jumped to session high as the euro stumbled to just above 1.19 while the relative premium to own exposure on the common currency over the next two months is at its lowest cost in more than a year and at levels rarely seen.  The pound jumped the most in a week amid speculation the U.K.’s new Health Secretary Sajid Javid could accelerate the country’s exit from pandemic restrictions. Javid, who replaces Matt Hancock, has said he wants to see the country return to normal “as soon and as quickly as possible”. The New Zealand dollar dipped as the government extended movement restrictions in the Wellington region for two days. Asset managers turned bearish on the kiwi for the week ended June 22, the first time since April, according to CFTC data, while leveraged longs surged to an almost four-month high for the same period. The yen edged higher, gaining for a third day.

In commodities, oil was steady near the highest since 2018 ahead of an OPEC+ meeting at which the alliance is forecast to announce supply increases that won’t be enough to keep pace with the global demand recovery.

Asian equity markets were subdued following a light weekend in terms of macro drivers, with participants kept tentative heading closer towards HY-end and this week’s upcoming risk events culminating in the release of the latest US NFP jobs data on Friday, while US equity futures were uneventful with the Emini S&P fading an initial extension to fresh record highs. ASX 200 (Unch.) was constrained by underperformance in the tech sector and after Sydney entered into a two-week lockdown in an effort to curb the outbreak of the COVID-19 Delta variant. Nikkei 225 (-0.1%) struggled for direction amid a slightly firmer currency and briefly tested the 29k level to the downside where it then bounced off a nearby floor, with Seven & I the top gainer after it was ordered by US antitrust regulators to sell 293 stores that were acquired in the takeover of Speedway and its 3,900-strong outlets. Shanghai Comp. (-0.1%) was lacklustre and failed to find inspiration from the resilience in Shenzhen bourses, nor from the Chinese data over the weekend which showed Industrial Profits rose by 36.4% Y/Y in May which slowed from the prev. 57.0% growth in April, while Hong Kong participants were absent for the entire morning session due to the black rainstorm warning which has since been lifted to allow afternoon trade to commence. Finally, 10yr JGBs were lower after last Friday’s selling pressure in T-notes but with downside stemmed amid the BoJ presence for JPY 950bln of JGBs mostly in 3yr-10yr maturities, while Aussie bonds traded mixed with pressure in the long-end following a 30yr government auction.

European equities (Eurostoxx 50 -0.4%) have kicked the week off on a softer footing in what has been a quiet start to the week. Stateside, price action in the futures markets is also relatively contained with some very minor outperformance in the e-mini Nasdaq (+0.2% vs. E-mini S&P U/C). From a macro perspective, infrastructure talks in the US continue to grab the headlines with US President Biden walking back his veto threat over the weekend. That said, the likes of Pelosi and Schumer could pose an obstacle to the legislation’s passage with the former of the view that the House will not vote on the bipartisan bill unless it is accompanied by a reconciliation bill. On the S&P 500, Goldman Sachs notes that its year-end 2021 target of 4300 is predicated on the US 10yr rising to 1.9% and P/E multiple remaining stable around 22x. GS notes that, all else equal, if interest rates remain roughly flat their model would imply a fair value of 4700, whereas if rates rose to 2.5% by year-end, fair value would be around 3550; 17% below current levels. Back to Europe, sectors are predominantly lower with Travel & Leisure a clear laggard as Tui (-3.1%), easyJet (-2.7%) and IAG (-4.1%) continuing to suffer at the hands of travel restrictions across the region with German Chancellor Merkel set to launch a bid to ban travellers from Britain to the EU regardless of whether they have been vaccinated or not. Other underperforming sectors included cyclically-exposed names such as Banks, Oil & Gas and Autos. In terms of stock specifics, Nokia (+6.00%) sit at the top of the Stoxx 600 after being upgraded to buy from neutral late last week (the Finnish market was closed on Friday) at Goldman Sachs; citing continued improvement in the wireless market driven by 5G. Burberry (-6.4%) is the region’s laggard after its CEO Gobbetti will leave the Co. at the end of the year and become CEO of Salvatore Ferragamo.

In FX, The Pound has rebounded quite firmly across the board to reclaim 1.3900+ status against the Dollar and fend off yet another assault on 0.8600 vs the Euro, with little sign of any real fallout from the latest scandal to hit Whitehall that has culminated in the UK’s Health Minister leaving his post. However, Cable remains top heavy into 1.3950 and Eur/Gbp underpinned ahead of 0.8550 as the Greenback retains an underlying bid in wake of the Fed’s recent hawkish shift and the index hovers just below 92.000 and above 91.500. Note, latest IMM data reveals that positioning is still net short even though more Bucks were bought back last week, and specs may want to reduce exposure further into month end on Wednesday plus NFP 2 days later.

In commodities, WTI and Brent are currently modestly firmer on the session but reside within a narrow range of circa USD 0.60/bbl so far and the few directional changes in performance this morning have follower broader risk sentiment, rather than specific fundamental updates. At present, the benchmarks are firmer by 0.10% as newsflow remains sparse and the situation is very much as-we-were from Friday looking out for IAEA updates, where Iran has placed the burden on the US to first remove sanctions and awaiting the week’s OPEC+ event. Elsewhere, China’s NDRC has announced it is increasing the domestic price of gasoline and diesel by CNY 225/T and CNY 215/T respectively from tomorrow. Moving to metals, spot gold and silver are contained and little changed overall on a session that has been somewhat choppy but given movements in the USD rather than any fresh macro driver. Finally, base metals are slightly softer but again relatively rangebound following a light APAC session and as industrial profit data for May out of China dipped from the prior reading.