Do You Hear The Bells Ringing?

Do You Hear The Bells Ringing?

Authored by MN Gordon via EconomicPrism.com,

There’s an old Wall Street adage, you’ve likely heard it, “No one rings a bell at the top (or bottom) of the market.”

The bell, of course, is the signal to sell at the market top.  Here we pause to take exception with this adage. 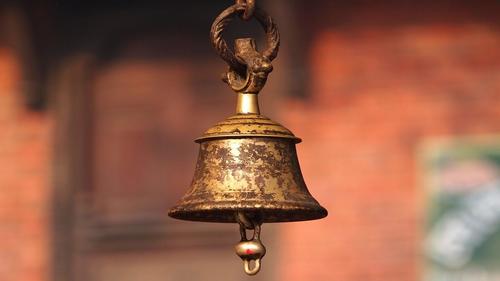 As far as we can tell, bells do ring at market tops.  Yet few hear them.  Most people’s ears are plugged with the prospects of easy riches.

Bull markets often give way to manias…where an asset’s intrinsic value becomes less important than the hope that an overpriced asset can be later offloaded at a higher price to a greater fool.  Certainly, irrational pricing based on greater fool dynamics is the sound of a ringing bell.  Though this can go on for years.

The current ratio of total market capitalization to GDP (now over 200 percent) is most definitely the sound of a ringing bell.  Another ringing bell is the $500 million batch in junk bonds recently sold by MicroStrategy for the sole purpose of buying bitcoin.  These bitcoin junk bonds pay a generous 6.125 percent coupon rate.

How will MicroStrategy pay the coupon if bitcoin goes down?  Will they sell more junk bonds?  Will anyone buy them?

Do you hear any bells ringing?

At the moment (at the market top), few people do.  These bells won’t be heard until after the market craters.  In retrospect, it becomes obvious that, at the market top, bells had been ringing practically every day.

The sound of a bell ringing at the market bottom is much more grim.  At real market bottoms, people kill themselves.  That’s when the great frauds are revealed.  And some former titans of industry are revealed to be great swindlers.

Today we look back nearly 100 years to one of the great Wall Street swindlers.  We squint for parallels to the present.  There is instruction to be found…and frauds to avoid…

On March 12, 1932, just several months before the market bottom of the Great Depression, Ivar Kreuger shot himself through the heart with a 9mm semi-automatic gun in his hotel room in Paris.  The world was shocked.  Why would the savior of Europe, the most respected business man in the world, an advisor to the President of the United States, off himself?

Many of today’s investors have never heard of Kreuger, the “Swedish Match King.”  They should.  Knowing his story could help protect their lifesavings in the months ahead.

Kreuger was a Swedish civil engineer, financier, and industrialist.  He got his start in the construction business.  In 1908, he co-founded Kreuger & Toll.  The company had early success and went on to construct the Stockholm Olympic Stadium and completed the foundation work for Stockholm City Hall.

Kreuger soon moved into matches.  Between 1913 and 1932, Kreuger built a global match empire, which owned manufacturing operations in 36 countries, had monopolies in 16 countries, and controlled two thirds of the world’s match production.

Kreuger quickly expanded his global monopoly by loaning money to governments in Europe, Latin America, and Asia in exchange for national match monopolies.  This business model required Kreuger to come up with ever deeper pools of money to loan. Thus, to further his expanding reach, sometime between 1923 and 1924 Kreuger transformed from a moderately honest industrialist to a dishonest stock promoter.

What compelled this transformation is anyone’s guess.  In a three part series that ran in Fortune in May, June, and July 1933, writer and poet Archibald MacLeish offered the following motivation.

“When, in that year [1923], Kreuger with his passion for power, discovered, through and not by Lee Higginson [the most prestigious bank in the world at the time], the New York glut of gold and the inexhaustible New York appetite for stocks he also discovered the superiority of the stock market to the match factory as a means of conquest.

“If that discovery implies a weakening of the mind then there were many other Wall Street idiots in the ‘20s.  […]  Other men before Krueger have believed their schemes were fateproof and have believed it with less reason than Kreuger had.  For it was always a prime consideration in Kreuger’s plans that some day—and some day not too far—the Swedish Match Monopoly would become a monopoly of the world, in which case all his claims and frauds and thefts would be made good.  And the Kreuger companies came within gunshot of that goal.”

Indeed, stock promotion and financial engineering, like an apple from a serpent, can offer the alluring promise of an easier softer way to attain wealth than actual production.

Kreuger relied on Wall Street capital markets to finance acquisitions and monopoly deals.  American investors were eager to get in on the outsized returns.

By 1929, the stocks and bonds of Kreuger’s companies, some which paid 25 percent annual dividends, were the most widely held securities in the United States and the world.  However, after Kreuger’s surprising suicide, forensic auditors at Price Waterhouse discovered that Kreuger had operated a giant Ponzi scheme.

His accounts were full of fictitious assets that were dispersed through a maze of over 400 subsidiary companies.  By late February 1932, Kreuger could no longer stay ahead of his creditors with his shell company money shuffling scheme.  The gig was up.  Several weeks later Kreuger made his final escape.

“We do not think more need be said about these published accounts except that the manipulations were so childish that anyone with but a rudimentary knowledge of bookkeeping could see the books were falsified.  […] Entries in its general books were palpably false, few entries even looking reasonable on the surface.”

We’re presently 12 years into a bull market.  Many investors, like those in the 1920s, believe the current rise in the stock market will continue.  They also believe the promises of financial engineering, many which were pioneered by Kreuger, will keep financial markets stuffed full of cash.  They believe this time is different.

More likely, however, it won’t be different.  More likely, a similar fraud will be discovered.

In the introduction to, “Kreuger: Genius and Swindler,” by Robert Shaplen, published in 1960, John Kenneth Galbraith remarked:

“Kreuger flourished during the boom years of the twenties; it is the nature of the boom that the men who have confidence and do not ask questions look with uneasiness on the suspicious men who do.  And we may lay it down as an absolute rule that, given an excess of confidence, there will be confidence men to take advantage of it.”

Do You Hear the Bells Ringing?

Here at the Economic Prism we’re suspicious.  We have little confidence in confidence men.  We ask questions…though not to be construed as accusations of fraud.  What follows are merely questions…

Countless bells are ringing.  Do you hear them?