Morgan Stanley: “The Market Gets It” That Trading Is About To Get Much More Difficult: Here’s Why

Morgan Stanley: “The Market Gets It” That Trading Is About To Get Much More Difficult: Here’s Why 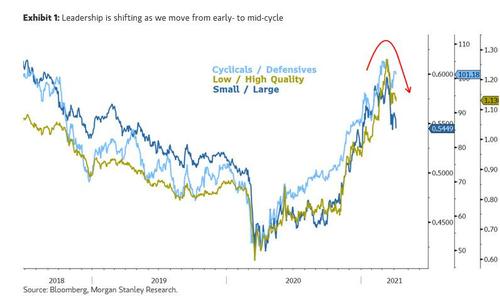 … while also cautioning that “the underperformance in IPOs and SPACs is a signal that the excessive liquidity provided by the Fed is finally being overwhelmed by supply“, Morgan Stanley’s chief equity strategist has published a fresh warning that markets are about to hit some potentially major turbulence as the “rising cost pressures/supply shortages, the definitive peak rate of change on economic data and earnings revisions and demand being overwhelmed by supply are all contributing to the deterioration in lower quality, smaller capitalization, and the more cyclical parts of the market.”

Wilson then points out that the market “gets” the approaching headwinds, which explains why “IPOs and SPACs have also been trading poorly for the past few months” and which in Wilson’s experience “is an early warning sign on real-time liquidity dynamics.” As such, Morgan Stanley continues to recommend “moving up the quality curve and skewing more defensively as earnings season proves to be a sell-the-news event.“

Picking up on what Goldman said overnight, namely that it now appears that the best of the economic surge is now behind us (and markets are starting to price it in), Wilson noted that while “over the past few weeks, economic data has been nothing short of spectacular” it’s really not that much of a surprise, at least relative to expectations. And, to Wilson that’s what ultimately matters for investors. Furthermore, as shown in the chart below, “many data series are peaking from a rate of change standpoint. In fact, the rally in bonds over the past few weeks has surprised many but the reality is that these strong data were well understood by markets.” As the MS strategist explains it simply, “if rates didn’t move up on the back of record economic data surprises last year, it’s not hard to see why they didn’t react more to the strong data of the past few weeks when it wasn’t such a surprise.” 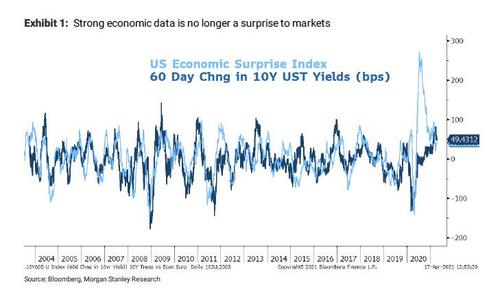 To be sure, Wilson has repeatedly noted that the “peak” rate of change has passed over the past few weeks and this observation is “core to our view that we are moving from early cycle to mid cycle in this recovery.” What’s even more notable is that “It’s happening about twice as fast” as we have experienced in the prior three recessions/recoveries, which also very much fits with the bank’s view that this cycle will be different – most notably, that it will run hotter but also shorter. As such, there are implications for equity portfolio managers to consider: In particular, Wilson notes his call to upgrade one’s portfolio by moving up the quality curve three weeks ago – high quality has started to outperform low quality, a move which Wilson thinks will continue. 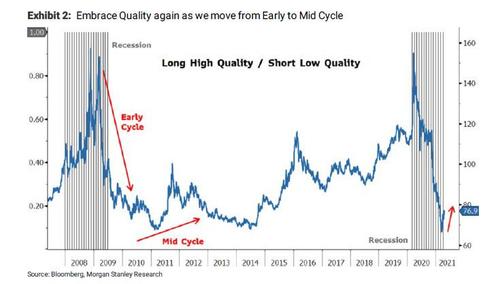 In addition to the shift toward quality, Wilson says he has “witnessed a move up the cap curve and a peaking of cyclicals vs defensives, all of which are in line with our change in recommendations over the past month (Exhibit 3). As part of this same shift, we downgraded discretionary and upgraded staples, which has not yet started to work but we still think presents a good opportunity because it’s another expression of our view.”

Validating his point, Wilson also notes that most of the cyclical, speculative and lower quality indices on a global basis have been underperforming now for months. While the high-quality S&P 500 and Nasdaq 100 are making new all-time highs, the following indices have peaked and failed to make new highs:

If that wasn’t enough, Morgan Stanley also observes that “many commodities are also laboring to make new highs as the high-quality S&P 500 and Nasdaq 100 breakouts look more and more isolated.”

Finally, picking up on a point he first made last weekend, Wilson warns that “the breadth of participation has deteriorated significantly whether we are talking about the very broad Russell 3000 index or Nasdaq Composite. “What this really means to the equity strategist is that the market “gets it” and is preparing for what is likely to be a more difficult environment for stocks and risk assets generally.

And, as he has discussed in recent week, Wilson cautions that there are several concerns fast approaching that will become more obvious over the next few weeks – more specifically i)rising cost pressures/supply shortages, ii) the definitive peak rate of change on earnings revisions and iii) demand being overwhelmed by supply.

On that last point, Wilson – and everyone else – has been watching how poorly IPOs and SPACs have been trading, which is an early warning sign on real time liquidity dynamics, which are typically difficult to gauge.

So has Wilson turned full bear?

Perhaps sensing that this question is coming, the chief MS equity strategist concedes that while he is less bullish on the more speculative / cyclical parts of the market in the near term, he retains high conviction in his reflationary view over the next 12 months:

Hence, we remain Overweight Financials, Materials and Industrials. Meanwhile, we remain Neutral on Tech and Overweight Healthcare given the greater valuation headwinds on the former.

Having said that, in the very near term, the top MS equity strategist does think rates can come in further as risk comes out during this mid-cycle transition, which should favor reasonably priced high-quality large-cap tech stocks like GOOGL.

Still confused? Lest he be accused of CYA too much with fancy verbal acrobatics, Wilson says that “the best way to characterize our view is that we like reflation beneficiaries but no longer favor the reopening theme so much at this point given 1) excessive valuation that discounts much of the recovery for many of these stocks and 2) execution / margin risk as the reopening actually happens.“