The Fed has an inflation problem, but it’s not the failure to meet an arbitrary target. The problem is that there is a significant separation between reported and market inflation. The uncoupling is not new and is a statistical issue. But it has become a thorny policy problem as easy money creates more market than reported inflation.

In practice, there should be no difference between reported and market inflation. But in the statistical business of measuring and reporting consumer price inflation (CPI), there is.

Market prices reflect current economic conditions and measure what the consumer would pay, and businesses receive. That is how prices for goods and services are measured and reported in the consumer price index, except for one.

However, since the late 1990s, the Bureau of Labor Statistics (BLS) has been using rents of primary residence as a proxy for the implied rent for owner-occupied housing, even though the markets’ characteristics and price trends are fundamentally different.

Two decades of rents and house price data show the scale of separation between reported and market inflation when statisticians use the data from one market to measure prices in another one (see chart). 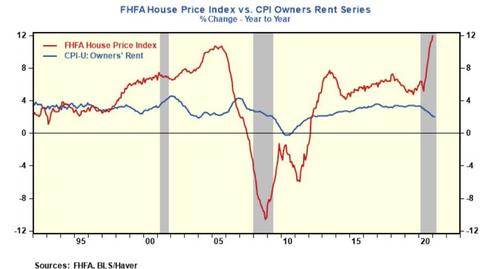 That was most obvious during the housing bubble of the 2000s, but it is also apparent today. For example, in the middle of the housing bubble in 2005, the house price index reported by the Federal Housing Finance Agency (FHFA) increased 10.4%, or 100 basis points faster than the prior year. But the CPI owner-rent series was only up 2.3%, unchanged from the rent inflation rate of 2004. A similar separation between house prices and owner rents is occurring today. In the past 12 months, the FHFA house price index is up 12%, and owners rent is up 2%

The statistical separation between reported and market inflation has become a policy problem. Policymakers claim that rising housing prices are a “win” for monetary policy but fail to realize that easy money creates more market inflation than reported inflation. The burst of market house prices and not estimated rent prices triggered the housing market collapse in the 2000s.

Market prices reflect the allocative decisions of the consumer. Those prices are the signals through which monetary policy needs to gauge its policy stance. The Fed’s inflation problem stems from its failure to distinguish between reported and market inflation. There is zero chance that a “bubble” will ever exist in implied rents or damage the real economy as it is an artificial price with no buyers or sellers. Market bubbles are the big ones as they have caused significant adverse economic outcomes.