While we have been writing more of late about corporations returning to the office and life (slowly) starting to return back to normal, not everybody is going to be making the trek back into the office.

Only about 38% of currently employed San Francisco workers said they would be making the human-shit-filled hobble back to the office five days a week. This number is down from the 58% who made the commute prior to the pandemic.

The data is according to a poll commissioned by regional business group Bay Area Council, and reported by Bloomberg.

The poll revealed that about a third don’t plan to return to the office in the same way they did prior to the pandemic and that about 16% of workers plan to work remotely after Covid, up from 10% pre-Covid.

Ultimately, this will result in about 384,000 less people driving or taking mass transit to work daily.

Jim Wunderman, President and CEO of the Bay Area Council, concluded: “Work and commute patterns have undergone dramatic changes over the past year, changes that will continue to evolve in the months ahead as the pandemic hopefully slips into our rearview mirror.”

Recall, in mid March, we wrote that Goldman Sachs had told its employees they would be returning to the office by the summer. Like its much-larger rival JPM, Goldman moved to start bringing traders and investment bankers back to the office last year, leading to some headline-grabbing trading-floor COVID outbreaks. 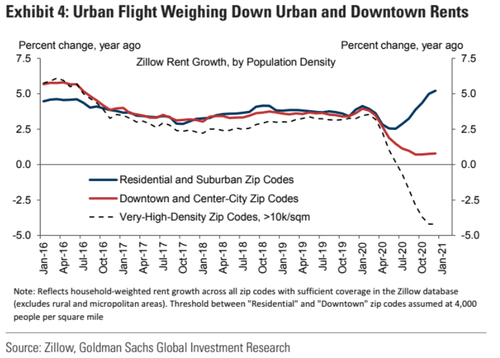 According to Reuters, Goldman CEO David Solomon informed staff during an all-hands Zoom call last month that the bank’s thousands of workers, who have mostly been working from home, will be back in offices by the summer.

The NYC-based investment bank has nearly 40K employees around the world and its push to return to offices has been gaining steam internationally. Many of the bank’s roughly 10K workers in India are already returning to offices in Bengaluru and Mumbai from the hometowns where they spent the pandemic. In London, traders, investment bankers and others can get tested for COVID-19 in booths scattered around the building.

Additionally, just two weeks ago, we reported that Wells Fargo would also have its employees back to the office this year, aiming for a September 6 return date.

The bank announced in late March that it plans on bringing its workers back to its offices after Labor Day, due to the “increasing availability of vaccines”. The bank says it is hoping for operations to return to normalcy after September 6, according to Reuters. Wells says it is still evaluating whether or not to allow certain businesses or functional subgroups to return to work before labor day.

Wells Fargo noted that about 200,000 employees have been working from home, and about 60,000 from offices, during the pandemic.