Given the state of New York City throughout the last year – the draconian lockdowns, the neverending proposal of new and more invasive taxes, Rep. Ocasio-Cortez turning away new businesses and insulting corporate America at every chance she gets and well…just about everything Bill de Blasio has done – can anyone really blame hedge funds for taking their business elsewhere?

The inevitable is happening, the free market is speaking. Hedge funds are taking their business to Florida, a new Bloomberg report notes.

Many who read Zero Hedge already know this: we have constantly been documenting the ongoing exodus to Florida as names like Goldman Sachs Group Inc., Apollo Global Management Inc. and Point72 Asset Management are all taking steps to move operations out of the state (or at least diversify operations). 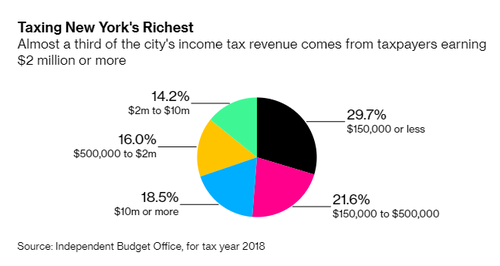 Timothy Noonan, a law partner at Hodgson Russ who specializes in tax residency issues, recently told Bloomberg: “There definitely is an unprecedented migration of high-net-worth taxpayers from New York City, and some of them are taking their businesses with them. With rates set to go up, they are ready to get out.”

While there is optimism about tourism and leisure providing a much-needed cash infusion back into New York, it’s going to be tough to not take into account the hole that many wealthy defectors will leave in the city’s budget. Florida, on the other hand, doesn’t have a state income tax. 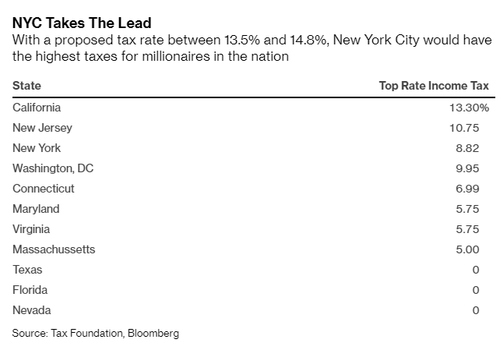 George Sweeting, deputy director of the city’s Independent Budget Office, said: “We’ve had high taxes and it hasn’t driven all the multi-millionaires out. We don’t know what the limit is. At what point does it become more than people are willing to pay? Theoretically there is some point there.”

Thanks, George. It’s called the Laffer Curve and it’s been around for a hundred years. Let us know what you find out.

Meanwhile, in some instances, hedge fund partners will move to Florida but keep staff and operations in New York. They will owe some New York taxes, but likely not as much as they would have otherwise. Bloomberg points out exactly how important the discussion of taxes are to smaller firms:

“Take the example of a manager who makes $10 million per year. In New York City, they would have paid more than $1.1 million in state and local taxes last year, and more like $1.2 million this year after the tax hike. By moving to Florida, the manager avoids that charge every year, as well as about $400,000 annually that their firm owes to the city’s 4% unincorporated business tax.