Riots Erupt Across US In Wake Of Police Shootings

Riots Erupt Across US In Wake Of Police Shootings

Demonstrations took place in a slew of major U.S. cities on Friday night, with some devolving into riots, in the wake of several deadly police shootings. 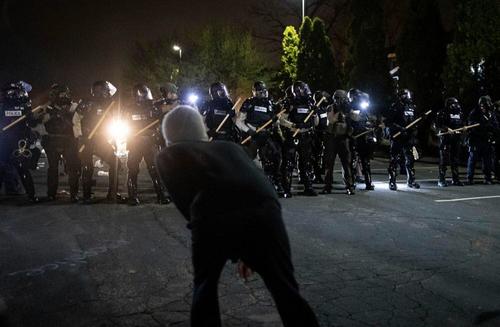 In Brooklyn Center, where 20-year-old Daunte Wright was fatally shot on April 11 after resisting arrest, a peaceful march swelled in size after returning to the police headquarters, and agitators began trying to tear down fencing protecting the building and lobbing projectiles at law enforcement.

Individuals wearing hockey gear, gas masks, and respirators, armed with weapons like baseball bats, got through a breach in the exterior fence, triggering law enforcement to order the crowd to disperse.

Most of those who had gathered did leave but the ones who did not were arrested, with upwards of 100 taken into custody.

“It left people behind who were intent to cause destruction and disorder. When somebody, a group of these people wearing masks are trying to cut down the fence to get into a safe area, their intentions are to cause harm either to the building or to the police officers and the deputies inside the fence. Again, violence is not going to be tolerated by myself or this operation. We need to grieve. We don’t need to have more problems with destruction,” David Hutchinson, the Hennepin County sheriff, told an early Friday morning briefing in the city.

Members of the crowd spraypainted “Death to Amerika [sic]” and “ACAB,” an anti-police acronym favored by the far-left Antifa network. 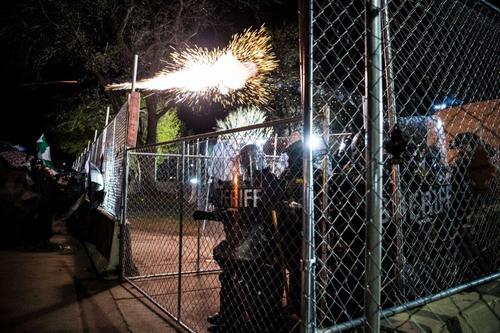 People face crowd control measures from a group of law enforcement officers after trying to tear down fencing around the Brooklyn Center Police Department, in Brooklyn Center, Minn., on April 16, 2021. (Chandan Khanna/AFP via Getty Images)

“We would like nothing better for all of our protests to go peacefully. It’s not fair to those that protest peacefully when the violent ones come in. If you’re going to commit violence, we’d prefer you not do that in Brooklyn Center, right, because it’s not fair to the citizens. They have enough going on right now as it is,” added Tony Gruenig, Brooklyn Center’s interim police chief.

Rioters in Portland smashed windows at various businesses, including Nordstrom and Nike, and torched an Apple location, after police fatally shot a man at a nearby park. 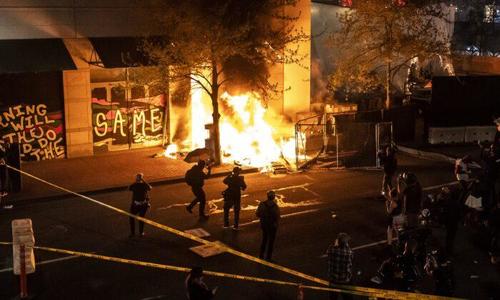 The Portland Police Bureau had to place on hold calls for service, including for burglaries and a hit and run, the bureau said in an incident summary. At 10:49 p.m., 79 calls were on hold.

Four people were arrested, though one was quickly released from jail. Firefighters put out the fires, with the extent of the damage not yet clear.

“No one is entitled to break windows, set fires, or attack police officers. If you choose to participate in this kind of criminal activity, you can expect to be arrested and prosecuted,” Chris Davis, Portland’s deputy police chief, said in a statement.

“None of this destruction tonight has anything to do with the important work of racial justice and reconciliation our community and our nation need at this critical time in our history.”

A crowd of 250 to 300 demonstrators assaulted both a community member and a police officer, broke windows, spray-painted buildings, and set a car on fire in Oakland, California, officials there said. 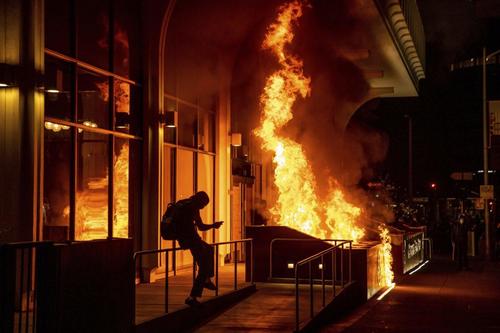 No arrests were made and no citations were issued.

Demonstrators were upset about the shooting of Wright, as well as another recent police shooting in California, of Tyrell Wilson.

Kim Potter, the former officer who fired on Wright, was charged this week with second-degree manslaughter. Andrew Hall, the Danville officer who fatally shot Wilson when the man refused to drop a knife he was holding in March, was sued this week by Wilson’s family.

A police union official in Minnesota has said Wright would still be alive he had complied with orders while a union official in Illinois called the fatal shooting of Adam Toledo, a 13-year-old who was shot by an officer on March 29 after evading the police, justified.

In Chicago, protesters gathered Friday to speak out about the Toledo shooting.

“The rage does feel deeper now than it was even 24 hours ago or the start of the week,” Julie Wilson, one of the protesters, told CBS Chicago.

The crowd of approximately 1,000 clashed with police officers who arrived to disperse them from Logan Square Park. It was not clear if any arrests were made.