As the people of England and Wales celebrate the end – or at least the beginning of the end – of the COVID restrictions that have stifled the economy for more than a year, new data from the Office of National Statistics have illustrated a startling conclusion: nearly 25% of registered COVID-19 deaths actually aren’t being killed by the virus, something that we have been discussing here at Zero Hedge since we first pointed out that motorcycle accident deaths were being labeled “COVID deaths” in Florida. 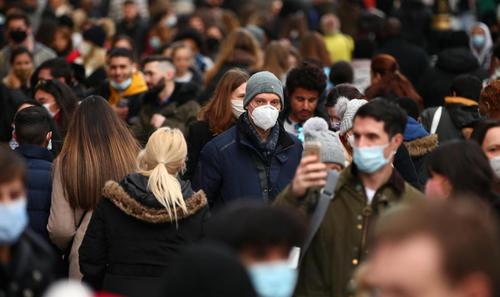 This time, it’s not just accident deaths, but deaths of all kinds, that have been unduly counted in Britain’s COVID death numbers. As the Daily Mail put it, many of the coronavirus deaths which are registered are now people who have died “with” the disease rather than “from” an infection. Dying “with” COVID can land somebody’s death counted in the official data even if COVID isn’t listed as the primary cause of death on their death certificate.

According to the numbers, 23% of Britons who died in the outbreak died “with COVID” rather than from COVID, as the Daily Mail shows in the chart below. For the record, 23% of the current death toll of 127,123 would be roughly 30K deaths misleadingly labeled. 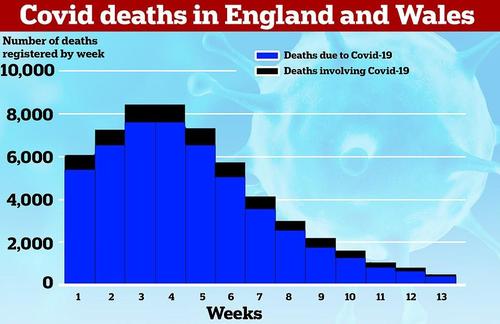 In the wake of the data’s release, Prime Minister Boris Johnson has refused to expedite England’s reopening, and warned that cases will rise in the coming weeks as thousands of Britons rush to spend their cash now that pubs and indoor dining have reopened (which happened Monday, as we reported). 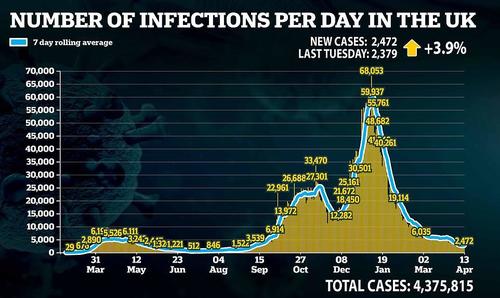 The ONS also shared data putting COVID deaths within the context of all deaths recorded in the UK. 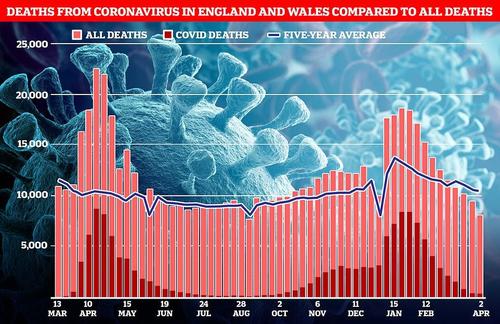 While COVID deaths and cases have rebounded across Europe, the UK has been a notable exception, with just 23 deaths reported yesterday, according to data from the UK’s COVID dashboard. All together, coronavirus deaths now make up just 4.9% of deaths registered in England and Wales compared with 45% in mid-January.

In reality, the UK has seen fewer than 30 deaths per day from COVID since the beginning of April, despite the government’s claims that daily deaths have been as high as 60. Part of this is due to the rush to release data to the public, as numbers in the daily update often actually died days or weeks earlier, and this delay isn’t explained to the public.