Discrimination against people on the grounds of their health status is not acceptable, while the ever increasing reach of the surveillance state is pernicious. The idea of people without Covid-19 antibodies being treated as second class citizens should be anathema to anybody with concern for human liberty. 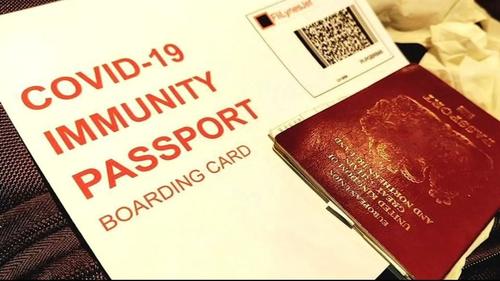 It is improbable that Covid-19 will be eliminated from the world in the forseeable future. Like Spanish flu or Hong Kong flu, it will lurk around in the mix of seasonal infections for many years to come, hopefully, but not necessarily, like them becoming less severe through serial mutations. It appears likely that, as with flu, there may be a regular vaccination cycle.

Just now, England and Wales are in negative excess deaths. Less people are dying than normally do at this time of year, on a rolling average of the last five years. I presume Scotland will be similar, though I cannot immediately find current figures.

The number of people dying within 28 days of a covid diagnosis is down to approximately 300 a week in the entire UK, and has been steadily falling. How much of this fall is due to vaccination and how much due to lockdown is an open question. But it remains a stubborn and undeniable fact, much as some people do not like it said, that Covid-19 has never been a major threat to young and healthy people. Older people and those in vulnerable groups have in very large majority been at least partially vaccinated now. The odds of those in the unnvaccinated groups dying of covid are really very low indeed.

A medical member of the UK government’s Joint Committee on Vaccination and Innoculation stated on BBC News on Friday that the risk of mortality to a healthy person under 30 who caught coronavirus was 1 in 117,000. He was explaining that this is such a remote risk, that it was almost as remote as the chances of a serious side effect from the Astra Zeneca vaccine, and that was why the use of that vaccine in that age group was being suspended; not that the vaccine was dangerous to this age group, but that they didn’t need it enough to justify even a minuscule risk.

The point of vaccinating the healthy middle aged and under is not that Covid-19 is a serious risk of death to them; it is not. It is simply to break transmission. Now I have had my first shot of vaccine myself, and urge everyone to take their vaccine. I have expressed before my view that I believe that refusing to be vaccinated is an immoral position; it is to benefit from herd immunity while refusing to accept the very small personal risk from the vaccine itself. But I utterly reject the notion of compulsory vaccination or of penalising those who do not wish to vaccinated by limiting their lives. Health is a personal matter, and discrimination on the basis of health status cannot be correct, nor the revelation of details of health status to people other than medical professionals employed in care.

I have no problem with vaccine certificates for international travel, having carried them my entire adult life. But the idea of having to show intrusive personal identity and health status documents to prove who you are, and prove your antibody levels, before entering a pub or a theatre ought to be anathema to every right thinking person. It is like very poor dystopian science fiction.

If find the daily graphs of whole UK figures from from the Guardian is very helpful (the daily death figure is even lower than the average of about 40 this week because of weekend registration) .

Overall, it does not lie, although the left hand graph is massively distorted in its first months by the lack of testing availability. For most of the period, the relationship between all three graphs remains broadly constant. The glaring anomaly of daily cases in the first few months (the left hand graph) relates entirely to the fact testing was unavailable. It also accounts in very large part for the huge public hysteria over Covid-19. When it was only possible to get a test if you were approaching death’s door, a very high percentage of those with positive tests died. That this led large numbers of otherwise intelligent people to accept ludicrously exaggerated infection fatality rates for the disease, is something I struggled with a great deal.

We are probably many years away from there being a scientific consensus around the infection mortality rate of Covid-19, and indeed consensus may never emerge – there is still much debate over infection mortality rates from various types of flu. This letter published in the BMJ cites the Pastor-Barriuso study finding a median of 0.8% and Ioannidis finding 0.27%. What does appear true is that Covid-19 is particularly transmissible, so while it may not have an infection mortality rate very much greater than influenza, it does have the ability to kill a lot of people in a short space of time and overwhelm health services. There are also the effects of long covid, which appear still to be little understood.

I am genuinely unsure why it causes so much anger to state that those people who are non-geriatric and healthy are only at very slight risk of death from covid-19, when it is an undeniable fact. I feel confident that we have seen the end of mass deaths in the UK, because the at risk sectors of the population have been vaccinated, reducing their chances of getting seriously ill by 80%. So there may be something of a surge in cases following lockdowns, but it will not result in a matching increase in hospitalisations or deaths.

Covid-19 has been a genuine crisis which has killed a large number of people and played havoc with the lives of many others. But it too will pass and the worst of it has passed. It must not be allowed to become an excuse for permanent even higher levels of governmental intrusion and control. We are approaching normality again. Both power-drunk politicians and Stockholm syndrome populaces need to embrace the idea of normal. It is a great deal more pleasant.

Unlike adversaries including the Integrity Initiative, the 77th Brigade, Bellingcat, the Atlantic Council and hundreds of other warmongering propaganda operations, Craig’s blog has no source of state, corporate or institutional finance whatsoever. It runs entirely on voluntary subscriptions from its readers – many of whom do not necessarily agree with the every article, but welcome the alternative voice, insider information and debate. Subscriptions to keep this blog going are gratefully received.