After a big (unexpected) drop in February, analysts expected a rebound in March but were disappointed in its scale as US Industrial Production rose just 1.4% MoM (vs +2.5% expected) after a downwardly revised 2.6% slump in February. 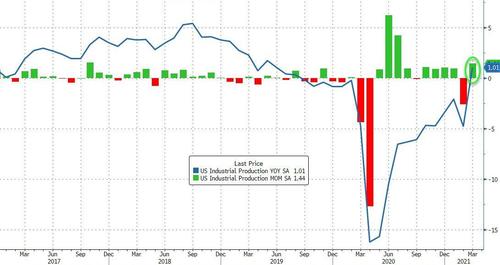 The 1.4% rebound was still the biggest jump since July and, given the weak comps, sent Industrial Production up 1.01% YoY. The gain in March followed a drop of 2.6 percent in February, which largely resulted from widespread outages related to severe winter weather in the south central region of the country.  For the first quarter as a whole, total industrial production rose 2.5 percent at an annual rate.

In March, manufacturing production and mining output increased 2.7 percent and 5.7 percent, respectively. The output of utilities dropped 11.4 percent, as the demand for heating fell because of a swing in temperatures from an unseasonably cold February to an unseasonably warm March. 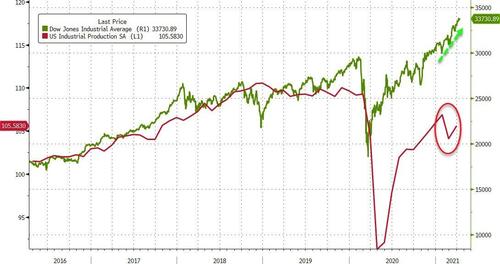 Which one of those two lines will revert to the other?