BofA Jumps On Solid Beat Thanks To Jump In Trading Revenue, Reserve Releases

BofA Jumps On Solid Beat Thanks To Jump In Trading Revenue, Reserve Releases

One day after stellar Q1 earnings reports by JPMorgan and Goldman and the latest clunker from Wells Fargo, this morning Bank of America was so eager to demonstrate that it was no slouch, it posted earnings about 2 hours early, its Q1 report hitting just after 520am ET, when it also reported big beats on the top and bottom line thanks to a solid jump in better-than-expected trading revenue, echoing the releases from JPMorgan and Goldman. And while CEO Brian Moynihan flagged better credit costs and progress in the pandemic, which he said points to an accelerating recovery, he conceded that “low interest rates continued to challenge revenue.” And in a hint of Wells Fargo, BofA’s net interest yield slid to 1.68% from 2.33% a year earlier, trailing an estimate of 1.71%.

Here are the Q1 details: 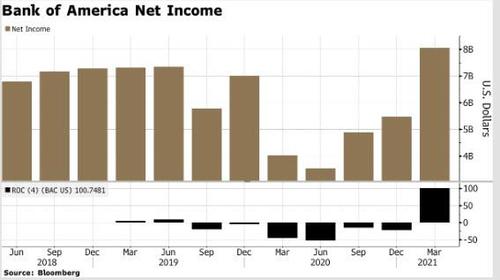 Like JPM and Wells, the generous bottom line beat was facilitated by a jump in reserve releases, which increased to $2.7BN in the quarter, up from $0.8BN in Q4, and a sharp reversal from the loan loss reserve increase of $3.6BN a year ago. 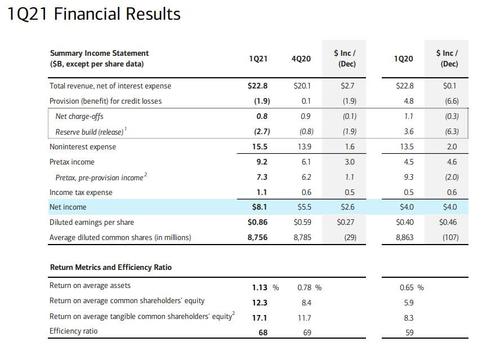 Digging into the asset quality and the reserve release, BofA disclosed that its provision benefit (recovery of credit losses) of $1.86B – far above the $473.5MM expected – included a $2.7B net reserve release reflecting an improved macroeconomic outlook and balance declines, offset by $823MM in Net Charge Offs. 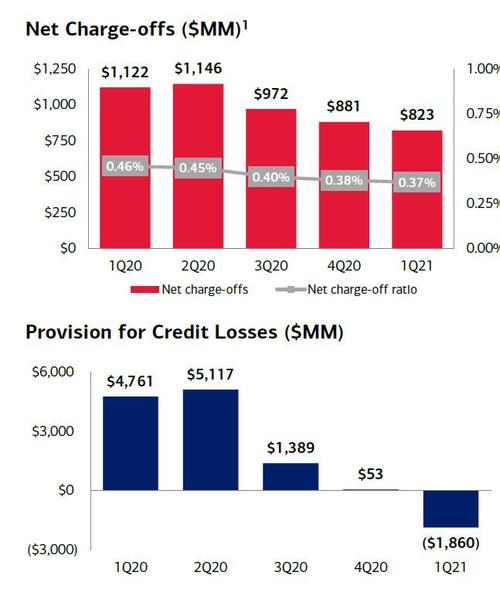 After the reserve release, BofA’s allowance for loan and lease losses of $16.2B represented 1.8% of total loans and leases, while the total allowance of $18.0B included $1.8B for unfunded commitments; nonperforming loans (NPLs) increased $0.2B from 4Q20, driven by consumer real estate due to deferral activity.

So with the bank’s reserves out of the way, attention immediately turned to the bank’s trading group, where it followed in JPM and GS footsteps, with stellar results, as follows:

Incidentally, the “market volatility driven by a weather-related event.” is surely linked to the Texas freeze that roiled energy markets and left swaths of the U.S. without electricity in February. 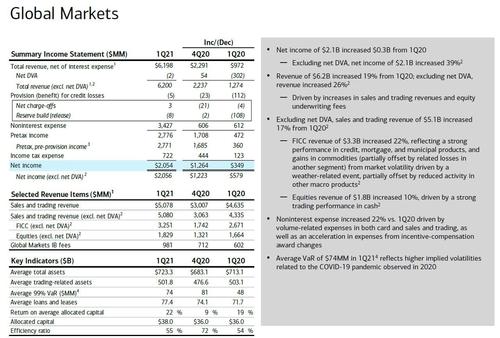 To be sure, there was a modest disappointment in BofA’s equity trading increase, which at 10% was well behind peers such as JPM and Goldman.

Also notable, the bank’s average VaR of $74MM in 1Q, up from 48 a year ago, reflected “higher implied volatilities related to the COVID-19 pandemic observed in 2020.“ 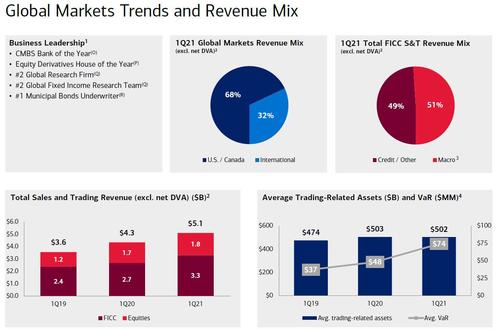 Going back to BofA’s core Interest Income business, there was some disappointment in the bank’s Net Interest Income, which while not quite as bad as Wells, came in at $10.31 billion, down a whopping 16% y/y due, and missing the estimate of $10.32 billion. According to the bank, NII decreased “$56MM from 4Q20, primarily driven by lower loan balances, two fewer accrual days and higher premium amortization  expense, partially offset by higher investment securities balances due to the deployment of excess cash.” 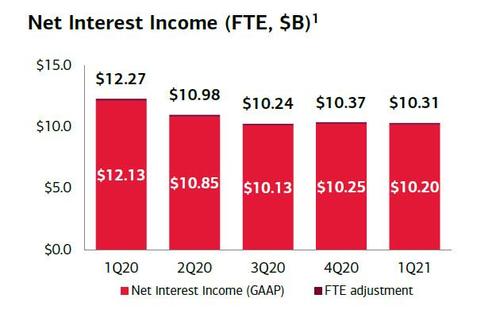 Meanwhile, the Net Interest Margin (or Yield) also declined to 1.68% from 1.71%, missing the 1.71% estimate, although the bank was quick to point out that “excluding Global Markets, net interest yield stable at 1.90%.” 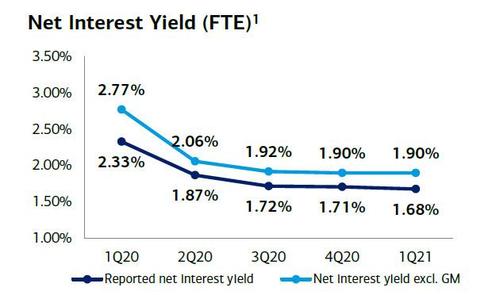 The bank also noted its sensitivity to a +100 bps parallel shift in interest rate yield curve which it estimated to benefit net interest income by $8.3B over the next 12 months. Of course, the opposite is true as well if rates decline again.

BofA’s Capital looked good, with the CET1 ratio increasing by about 100 basis points from the same quarter last year.

Meanwhile, in Consumer banking, income of $2.7 billion increased by 50%. Lower provisions for credit losses were the driver, and reflected a strong reserve release. The bank said credit quality remained strong.

The chart belos shows the trends in consumer banking. The trend in loans and leases is downward, echoing JPMorgan’s comments yesterday on weaker loan demand. Yet consumers kept investing assets, with the amount rising to $324 billion from $212 billion. 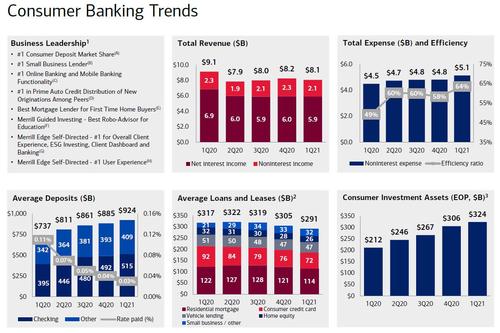 And also similar to JPM, costs jumped: non-interest expenses at the lender rose 15% to $15.5 billion, driven by costs including those linked to Covid-19, special compensation awards for associates and charges for shrinking the real estate footprint: “We saw strong growth in our capital markets and wealth management businesses, which allowed us to absorb additional expenses,” CFO Donofrio said in the earnings statement. Compensation expenses of $9.74 billion, up 17% y/y and the highest in years, that were sharply higher than the estimate of $8.51 billion. In fact, they were higher than the highest estimate of $9.19 billion. 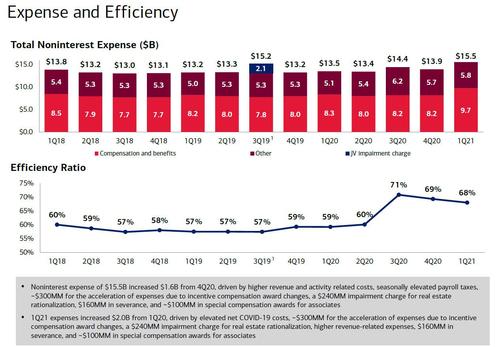 And also similar to JPM, while total loans continued to decline, and shrank 8% YoY to $908MM… 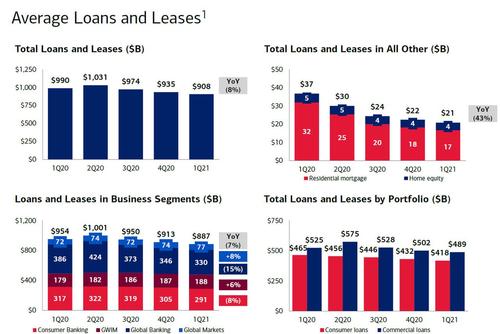 … while average deposits surged by 25% to $1.8 trillion, as the Fed’s non-stop liquidity injections have to be parked somewhere. 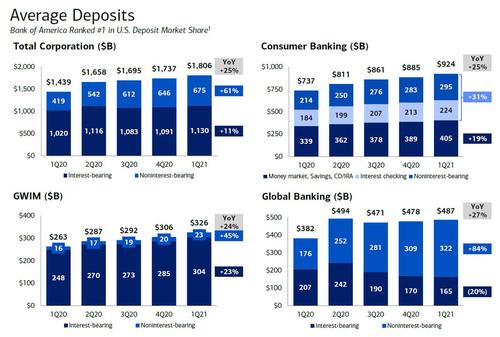 In other words, the deposit-vs-loans divergence continued at BofA as deposits rose 25% to $924 billion while loans fell 8% to $291 billion in consumer banking.

Keeping an eye on lending ratios: total loans and leases as a percentage of the bank’s total assets continue to decline, courtesy of the Fed:

Bank of America also announced a $25B Stock Buyback Plan, adding that it expects to distribute additional capital to holders. This, however, was simply the board increasing the open-ended authorization, while actual capital return is limited by the Fed and the stress-test process.

Commenting on the results, CFO Paul Donofrio said “we believe our strong balance sheet, the diversity of our business lines, and the careful way we have managed risk for many years should enable us to continue to return to our shareholders the excess capital that is not needed to support economic growth, deliver for customers and communities, invest in our future and sustain strength and stability through future economic cycles.”

Meanwhile, CEO Brian Moynihan flagged better credit costs and progress in the pandemic, which he said points to an accelerating recovery.  However, Moynihan said that “low interest rates continued to challenge revenue.” And the bank’s net interest yield slid to 1.68% from 2.33% a year earlier, trailing an estimate of 1.71%.

Commenting on BofA’s result, Atlantic’s John Heagerty said that BofA’s results were similar to those at peer banks, with a “sizable beat based largely on reserve releases and strong trading & IB revenues.” He added that wealth management revenues topped his forecasts, while the bank’s net interest margin decline was more modest than others, and “credit quality remains excellent.”

“Overall, this looks like a good result and BAC is very well positioned to benefit from the ‘accelerating recovery.”’ 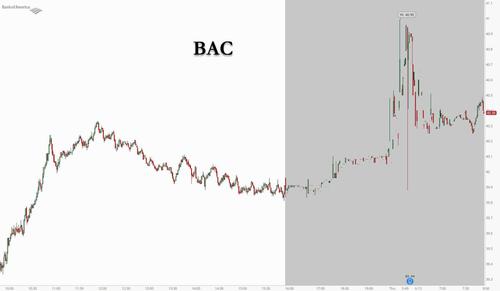 The full investor presentation is below (pdf link)