Last week we made a remarkable observation: despite some 100 million Americans not in the labor force (of which 94 million do not want a job)… 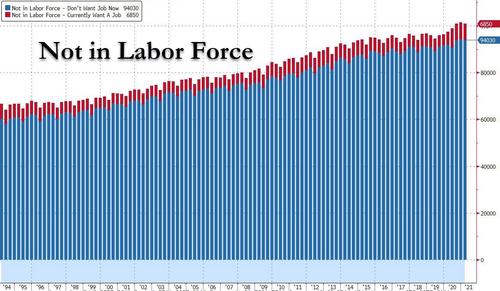 … there is now a full-blown labor shortage in the US, for one simple reason – trillions in Biden stimulus are now incentivizing potential workers not to seek gainful employment, but to sit back and collect the next stimmy check for doing absolutely nothing in what is becoming the world’s greatest “under the radar” experiment in Universal Basic Income.

Even more amazing: a stunning 91% of small businesses surveyed by the NFIB said they had few or no qualified applicants for job openings in the past three months, tied for the third highest since that question was added to the NFIB survey in 1993.

One of our favorite labor market metrics, the so-called “take this job and shove it” indicator- or the “Quits” rate from the JOLTS survey – is the latest confirmation of how empowered workers feel: in March the number of people quitting jobs hit 2.3% of overall employment in January, just a tenth of a percentage point below the record going back to 2001.

But what is most striking is the context on these figures: recall that just one year ago, the unemployment rate was a depression-era 14.8%. And while it has since dropped to 6%, it remains well above the 3.5% rate of February 2020, before the pandemic. So judging from the jobless rate – which the Federal Reserve tracks closely – there’s still plenty of slack in the labor market.

Fast forward to this week when we got the results of the latest, April, NFIB Small Business survey.

Next the not so good news: business uncertainty increased too about whether it is a good time to make capital expenditures. But the kicker: 42% reported job openings that could not be filled, a record high. 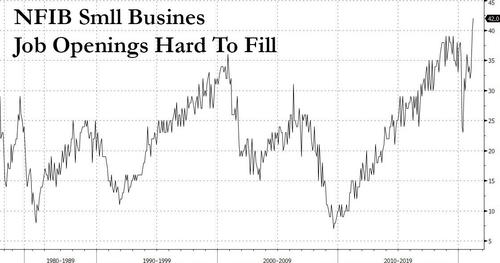 The key quote from NFIB Chief Economist Bill Dunkelberg was “Main Street is doing better as state and local restrictions are eased, but finding qualified labour is a critical issue for small businesses nationwide.” And the explicit admission that BIden’s “trillions” in stimulus are behind this predicament:

“Small business owners are competing with the pandemic and increased unemployment benefits that are keeping some workers out of the labor force.”

As if it wasn’t clear, the NFIC added that “finding eligible workers to fill open positions will become increasingly difficult for small business owners.”

And for those readers quick to bash potential employers for being stingy and not simply raising wages to find qualified employees,  a net 28% of owners reported raising compensation (up three points) and the highest level in the past 12 months, while another 17% plan to raise compensation in the next three months. Still, with the labor shortage well ahead of wage hike plans… 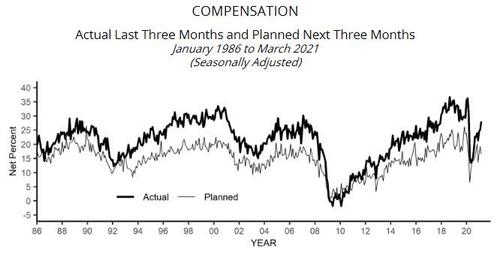 … one things is clear: profits margins – if only for small businesses – are about to collapse, making the big megacorporations winners once again.

As for wages, while owners are still kicking and screaming, the Universal Basic Income so generously doled out by the government has reset the minimum practical wage so high that companies will have no choice but to hike compensation, the Fed just may get the benign, “non-transitory” inflation it has been so desperately seeking for so long… at least as long as the government continues to print welfare checks for some 18 million Americans. 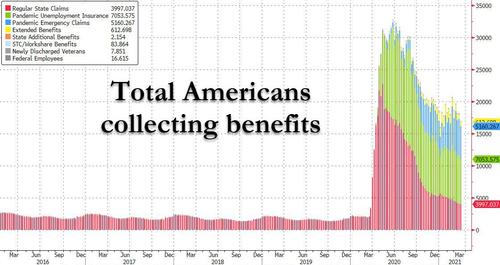 Summarizing the data, Rabobank’s Michael Every writes “so unemployment benefits are ironically helping to push up wages, at least temporarily – which I am sure nobody intended, but underlines just how radical policy has to get in the US to make it happen.”

His conclusion: ”the problem is that small businesses trying to get past Covid are least well placed to lead this socio-economic charge; and if this points to a wage-price spiral –which is still unlikely– then the bond market will soon be pointing its finger at the Fed.”