After the stellar results from both JPM and Goldman, we got the now traditional disappointment from Wells Fargo which reported Q1 earnings that were mixed at best.

The bank reported Q1 total revenue of $18.063BN, beating estimates of $17.5BN, with EPS of $1.05 also stronger than the 0.70 expected, and while CEO Charlie Scharf said that “Charge-offs are at historic lows and we are making changes to improve our operations and efficiency” he cautioned that “low interest rates and tepid loan demand continued to be a headwind.” 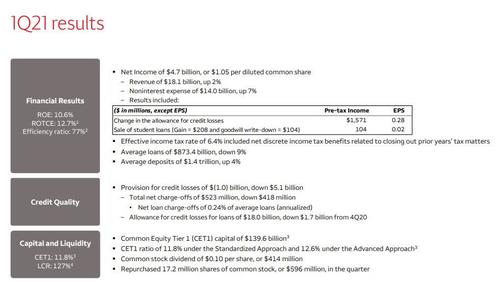 The good news: at least Wells revenues beat expectations, not something it can say for its previous quarters: 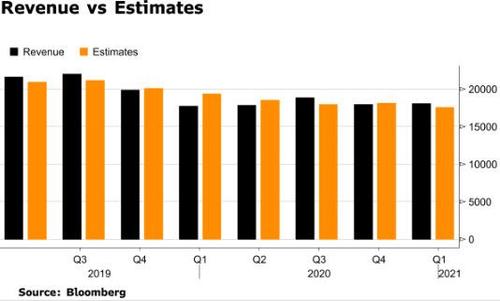 Sure enough, as with JPM, there were a number of asterisks here: the bank’s net income of $4.74 billion was boosted by a larger-than-expected release of loan-loss reserves. To wit, the $1.6 billion reduction in the allowance for loan losses “reflected an improving U.S. economy,” and “due to continued improvements in the economic environment and lower net charge-offs” the bank said. 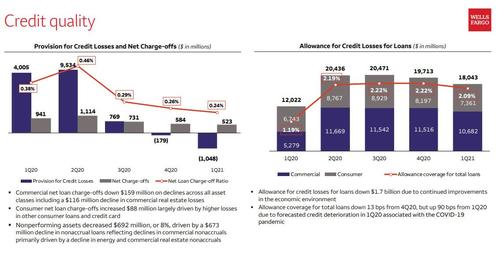 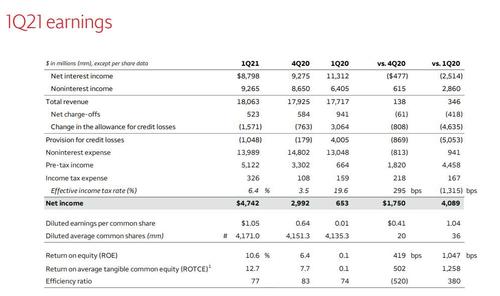 Things were especially ugly in net interest income, which tumbled a whopping 22% to $8.8BN from $11.3BN as “interest rates were a drag” and the impact was felt across the company’s businesses: consumer, commercial and corporate and investment banking. 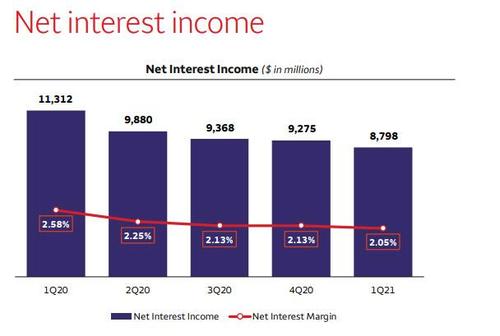 Commenting on this ongoing decline in Net Interest Income, the bank blamed it on lower rates even though rates actually jumped substantially in Q1.

And while consumer-bank earnings dropped 6% because of lower interest rates, home lending was a bright spot, with earnings rising 19% on higher retail mortgage originations and a higher gain on sale margin. Wells Fargo is the biggest mortgage lender in the U.S.

Like JPM, Wells reported a decline in loans while deposits increased thanks to the ongoing QE.

Some more details, first on loans:

While interest income missed expectations, expenses jumped $1BN Y/Y and at $14 billion, were a touch higher than analysts forecast, showing the company still has a long road ahead to rein in costs, and primarily the impact of a lower deferred compensation plan expense. 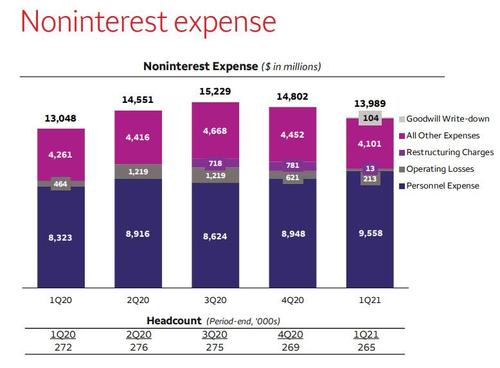 This is what Wells said:

Moving on to Wells Fargo’s corporate and investment bank, which was also a mixed picture:

Commenting on the results,Wells Fargo CEO Charlie Scharf’s said “our results for the quarter, which included a $1.6 billion pre-tax reduction in the allowance for credit losses, reflected an improving U.S. economy, continued focus on our strategic priorities, and ongoing support for our customers and our communities. Charge-offs are at historic lows and we are making changes to improve our operations and efficiency, but low interest rates and tepid loan demand continued to be a headwind.”

Scharf also said the bank was working to “build the appropriate risk and control environment remains our top priority. This is a multiyear effort and there is still much to do, but I am confident we are making progress.”

In response to the earnings, Wells Fargo initially fell more than 1% but then swung to a gain of about 0.4% as investors assessed first-quarter results that included a revenue beat, a miss in net interest income, and CEO Charlie Scharf calling low interest rates and loan demand headwinds. 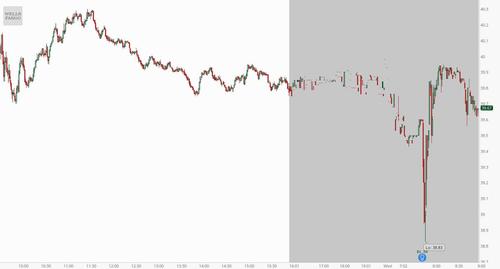