‘Out To Kill A Cop’ – Sniper On The Loose In Maryland

‘Out To Kill A Cop’ – Sniper On The Loose In Maryland

A gunman is on the loose in Gaithersburg, Maryland, a city located approximately 20 minutes north of Washington, DC, after police say someone opened fire on officers from “higher elevation.”

Gaithersburg Police Department (GPD) received a call around 1500 ET for a “parking hazard” at 392 N Summit Avenue. When officers responded, they were shot from above.

Officers from @GPDNews were dispatched to 392 N Summit Ave for parking hazard at approx 3:00 pm. As officers responded to call, reported being shot at from higher elevation. Add’l officers, to include MCP officers, responded. MCP & @GPDNews are actively searching for suspect(s).

GPD reports no injuries have been reported, but they warn residents to stay away from the area.

GPD has advised, “residents to shelter in place as this is an active scene.”

We are encouraging residents to shelter in place as this is an active scene. https://t.co/Y4ryqlxs7q

Here are more details of the ongoing situation in Gaithersburg from the local paper The Chesapeake Today:

Shelter-in-place in Gaithersburg, Maryland as gunman on the loose after shooting at police responding to parking hazard. Gaithersburg police responded to a report of a vehicle blocking the roadway near 392 N Summit Ave at approximately 3 pm. As officers were responding to the scene, shots were fired at them from a higher elevated location. A shelter-in-place is in order and everyone in the area of the 390 block of N Summit Ave / Girard St. is asked to keep out of the area. Police are actively searching for suspect(s). 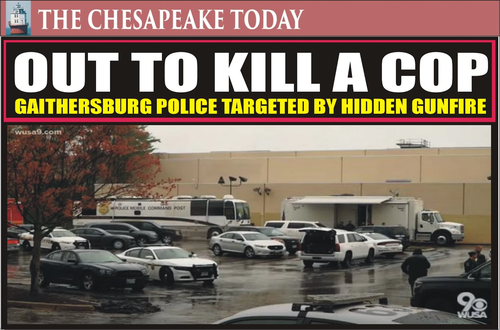 Local news WTOP’s Ken Duffy said GPD is searching for someone who fired at officers from an “apartment balcony.”

Fox 5 DC reports all high school athletics events in Gaithersburg are canceled this evening after a shelter-in-place order has been issued.

All high school athletics events in Gaithersburg have been canceled after police issue a shelter in place order as officials search for a gunman who reportedly fired at officers from what they described as a “higher elevation” this afternoon.

The latest from Gaithersburg is that shooter is still on the loose.

VIDEO: The scene outside Lakeforest Mall in Gaithersburg at this hour.

About a half mile from here, police continue to search for whoever fired shots from “a higher elevation” in the direction of officers. No reports of injuries. @mcpnews @wusa9 pic.twitter.com/iKA1WytpV4

Swat with military vehicles have been called in to assist local police. 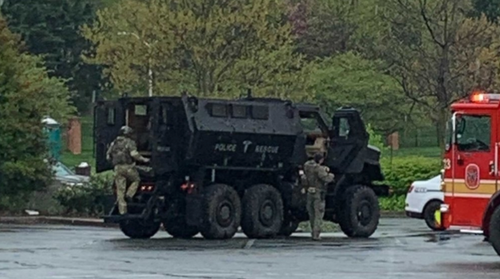 *This story is developing…