There were shades of the Goldman Sachs “of old” – not the current Frankenstein monster trying desperately to cater to consumers with Apple co-branded credit cards – in the the bank’s reported Q1 quarter results, which were an absolute blockbuster, and which unlike the report from JPM were not artificially goosed by billions in reserve releases.

Goldman reported Q1 net revenue and EPS that blew away expectations, as follows:

Here is a Q1 snapshot… 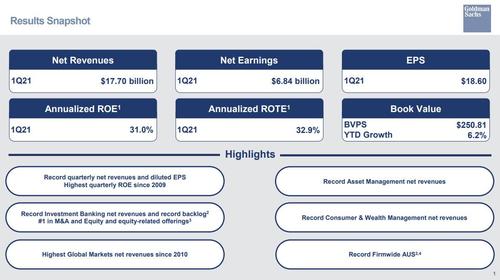 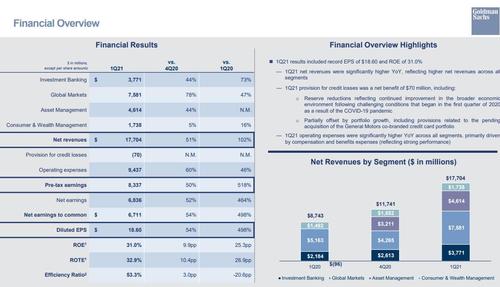 Some more details from the quarter, where a notable jump was seen in asset-management revenue which surged to a record $4.61 billion, backed by a surge in equity investments.

As expected, the biggest revenue driver was the bank’s trading division, where revenue surged 47% to $7.58 billion – the group’s best performance since 2010 – led by the equities division, which benefited from the day-trading Reddit crowd that helped turn the first quarter of 2021 into one of the wildest periods of stock-market mania in modern history.

The results were broken down as follows: 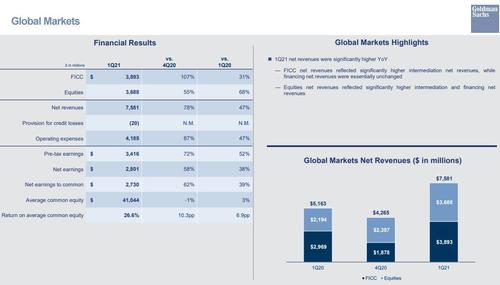 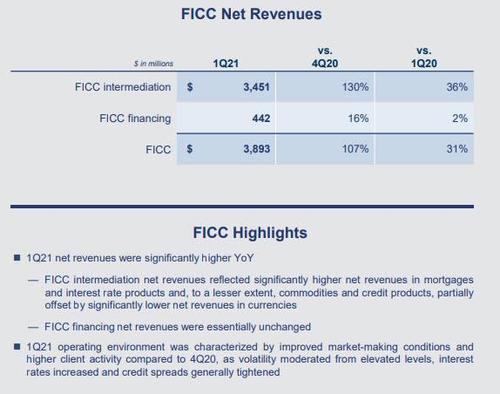 On the equities side, Goldman was similarly excited saying that the Q1 operating environment was “characterized by higher client  activity and improved market-making conditions compared to 4Q20, as volatility moderated from elevated levels and global equity prices were generally higher.” 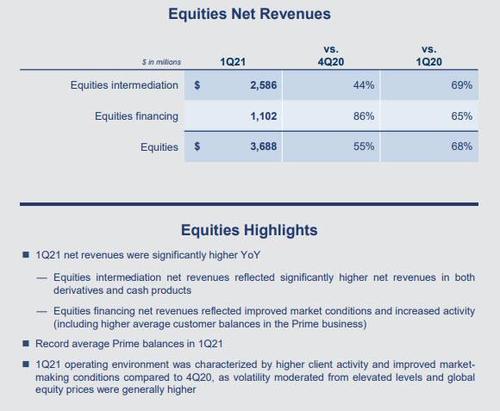 Amusingly, the bank said that it had record average Prime balances in Q1 2021… One wonder how much of this is Archegos and friends? That said, Goldman managed to avoid the debris from the collapse of Bill Hwang’s Archegos Capital Management, even as rival Credit Suisse Group AG has said it expects almost $5 billion in losses from its exposure to the family office. Goldman was one of the banks able to liquidate its Archegos holdings relatively quickly, allowing it to emerge unscathed from the debacle.

Joking aside (although for Credit Suisse bankers about to lose their bonus it’s no laughing matter), it’s safe to say that absent another shock, market revenue for Goldman will decline especially now that focus is shifting to cryptos with the Coinbase IPO.

Meanwhile, as we noted earlier this week, the SPAC boom is coming to an end as the SEC is cracking down on how accounting rules apply to a key element of blank-check companies. That could block the issuance for new deals hitting the market and slow down the torrid pace of SPAC deals.

Goldman’s dealmakers also contributed to the positive quarter, with investment-banking fees surging 73% to a record $3.771BN, as revenue from equity underwriting quadrupled to $1.57 billion as the red-hot market for special purpose acquisition companies and technology-company initial public offerings gave bankers a bonanza in the first three months of the year. 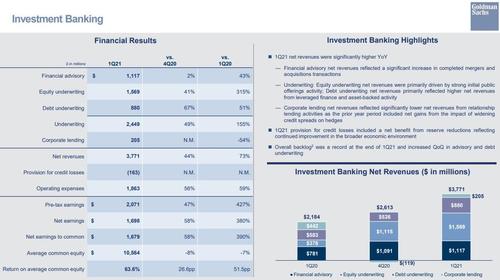 Some comments from Goldman:

Goldman also revealed that its overall ibanking backlog was a record at the end of 1Q21 and increased QoQ in advisory and debt underwriting.

As Bloomberg notes, investors will look for signs of how long IPOs and trading will keep the machine roaring at the investment bank, which has had an extraordinary run through the Covid-19 crisis. In the year since the deadly pandemic first disrupted the global economy, Goldman Sachs has benefited from the resulting surge in market volatility and companies tapping wide-open capital markets.

Unlike JPM, which beat using the reserve release gimmick, investors were impressed by Goldman’s results, and the stock was solidly higher premarket, despite having priced in much of the upside previously: Goldman’s stock has climbed 24% this year through Tuesday, reaching an all-time high of $348.81 last month. 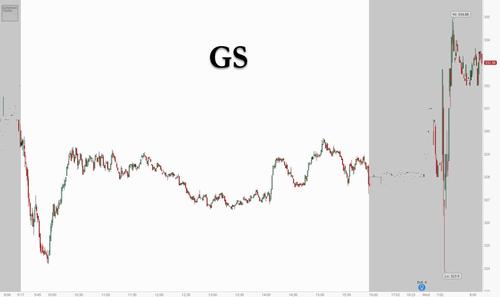 The Q1 investor presentation is below (pdf link):