The S&P 500 has continued its ascent on the back of aggressive monetary and fiscal policies, improving Covid case numbers, and the vaccine rollout. In recent weeks, equity market volatility, as measured by the CBOE VIX Index, sustained a drop below 20 for the first time since the start of the pandemic. It may not be a coincidence that this occurred around the same time as California, perhaps the most locked down state in the country, announced a target date for a complete reopening.

In this month’s letter, we review the status of the major macro variables: Covid, Fed policy, and the tax and spending outlooks – along with brief updates on two geopolitical variables, China and Russia.

In sum, the light at the end of the Covid tunnel appears to be getting much brighter, and the Federal Reserve is telegraphing that it won’t seek to interrupt the positive market and economic recovery with any aggressive change in policy course. Congress continues to pass historic spending legislation. But the tax man finally cometh, with the Biden Administration proposing to raise corporate taxes in an attempt to pay for new infrastructure programs. All the while, the geopolitical environment has turned slightly more negative. US relations with China continue to worsen, and the situation in Ukraine may have devolved to its worst point since the country’s revolution in 2014.

Overall, the market outlook remains constructive as there appears to be an end in sight to the current pandemic and the Federal Reserve keeps using its firepower to keep interest rates low.

Covid-19: Arguably, the coronavirus remains the most important market variable, and the news continues to improve.

According to the University of Oxford, approximately 34% of Americans have received at least one vaccine dose so far, and it appears that over 3 million doses are now being administered daily.

Even more, the dramatic decline in daily confirmed Covid cases since January appears to be holding, despite a slight uptick in March. Governor Newsom of California announced last week that he plans to fully reopen his state by June 15 if this trend continues. Being roughly the sixth largest economy in the world and having been one of the most locked down states in the country, this is the latest sign that we may very well be near the latter stages of the pandemic. 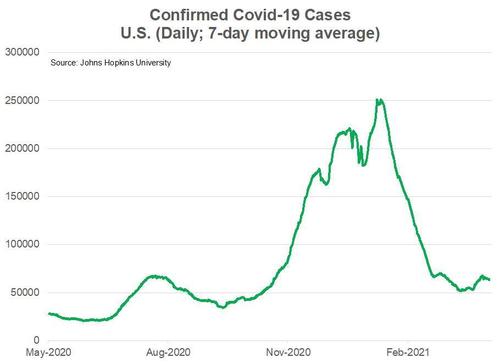 Fed Policy Outlook: For the most part, Federal Reserve officials appear most concerned about Covid-19 than inflation. As a result, the expectation remains that the central bank’s zero interest rate policy and $120 billion in monthly bond purchases will continue for a prolonged period of time.

Last Thursday, St. Louis Federal Reserve President James Bullard said: “We need to get the pandemic behind us first. There are still risks, and things could go in a different direction. [i] On the same day, while speaking at virtual events for the World Bank and IMF, Fed Chairman Powell echoed the sentiment that the coronavirus (and its correspondent impact on the global economy) is the primary macro variable today. “Viruses are no respecters of borders, and until the world really is vaccinated, we’re all going to be at risk of new mutations and we won’t be able to really resume with confidence all around the world.” [ii]

According to the Chicago Mercantile Exchange interest rate futures, the market is currently assigning an 89% probability that the federal funds rate will remain near 0% in December 2021. And according to the Fed dot plots released in mid-March, Fed policymakers are collectively forecasting a median federal funds rate of 0.25% by 2023; although four members expect rate increases to begin in 2022.

Note, with the prices of precious metals relatively stable during the last year, we remain unconcerned about the inflation outlook. Most likely, the core PCE deflator (personal consumption expenditures index) will rise modestly to nearly 2.0% year-over-year by the end of 2022, from its current rate of 1.4%.

Fiscal Policy Outlook: To date, Congress has passed nearly $6 trillion in Covid-related spending to shoulder some of the economic damage caused by the virus and the associated lockdowns. Now, quickly following last month’s $1.9 trillion package, the Biden Administration is crafting an infrastructure bill worth more than $2 trillion that would be coupled with an increase in the corporate tax rate to 28% from 21%, which would undo a portion of the Trump tax cut from 35% in late 2017.

As we expected, the plan is for these tax increases to be passed via the budget reconciliation process, which will only require 50 votes from Democratic senators (assuming Vice President Harris’s tiebreaking vote). Given that Republicans will likely oppose the bill unanimously (some have instead proposed a nearly $600 billion infrastructure bill unattached to any major taxes), all eyes are now on moderate Democrats, namely Joe Manchin of West Virginia, who the party will need in order to reach 50 votes in the Senate.

On April 7, Manchin penned a Washington Post Op-Ed clearly stating that he opposed eliminating or weakening the filibuster, and criticized the use of the budget reconciliation process to pass major economic legislation. He argued that the rights of small, rural states must be protected with the power of the filibuster, and reconciliation stifles debate and compromise, leading to drastic swings in federal policy making. While it’s likely that the filibuster will effectively remain in place for now, Manchin seemed to leave the door open a little bit when it comes to the budgetary legislative process. As a result, to win over some moderates, we believe the White House’s initial outlines for an infrastructure bill will be modified slightly to include less new taxes – perhaps an increase in the corporate tax rate to 25%. Negotiations could take another 30-60 days.

US-China Relations: In a bipartisan bill recently introduced by the Senate Foreign Relations Committee, the Strategic Competition Act of 2021 may continue the trend of a fracturing of the global economy into American-centric and Chinese-centric spheres.

The bipartisan bill, called the Strategic Competition Act of 2021, would forbid certain technologies to be sold to Chinese companies, place additional sanctions on Chinese officials over human rights abuses in Xinjiang, earmark funding for pro-democracy efforts in Hong Kong, forge closer diplomatic ties with Taiwan, and strengthen military ties with allies and partners in the Indo-Pacific region.

US-Russia Relations: Tensions between the United States and Russia are escalating over Ukraine again, which ignited in the 2014 Euromaidan revolution. Clashes continue in the eastern regions of the country, Donetsk and Lugansk, and Russian troops seem to be building the largest presence along the border since seven years ago. On Tuesday, April 7, Ukraine’s President Volodymyr Zelensky called for speeding up the country’s membership into NATO, which may be a red-line that the Kremlin will never allow. In a show of support from the Biden Administration, two American warships will enter the Black Sea in the coming week. It’s difficult to see US relations with Russia and China meaningfully improving anytime soon.