Amidst yet another night of violent unrest in Minnesota, Google is effectively shadow banning searches for “riots today” despite other search engines providing links to stories about the riots when the same search term is used. 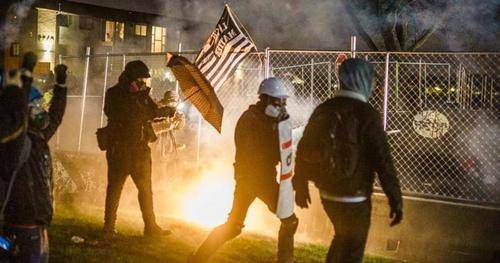 Black Lives Matter agitators rioted and looted for a second night in Minnesota despite the deployment of the National Guard.

The unrest is in response to the police shooting of Daunte Wright, who resisted arrest after cops stopped him for a traffic violation.

The killing is being described as an example of “systemic racism” despite the fact that Wright was shot by a dumb female officer who mistook a gun for a taser.

Apparently, Google is keen to not have the disorder that followed be described as “riots,” despite the fact that is precisely what happened.

A search for the term “riots today” returns results pertaining to the January 6th incident at the Capitol and the Brixton riots, which took place 40 years ago.

In comparison, searching for the same term on DuckDuckGo provides numerous links to stories about the riots (despite them being described as “protests” by most mainstream media sources).

The top news search result on Microsoft Bing also returns a story about the Minnesota riots.

Twitter also continues to describe the chaos as “protests,” despite even Joe Biden himself asserting that looting and attacks on buildings aren’t a legitimate form of protest.

Once again, despite the fact that Wright’s killing is blatantly being exploited by opportunistic thugs to commit crimes that have nothing to do with “justice” or “peaceful protest,” the media and the Big Tech establishment continues to run defense for violent BLM-inspired scumbags.

Get ready for another round of articles.

‘Why burning down small businesses and looting Nike for the latest Air Max is a legitimate form of protest’. pic.twitter.com/WpVy8pJ0qY