Markets Continue On Their Path Of Record Disconnects From Reality

Markets Continue On Their Path Of Record Disconnects From Reality

Authored by Sven Henrich via NorthmanTrader.com,

The ghost of 2013 indeed is hanging over this market. Nothing matters and the trend remains fully intact and new record market highs are made every month. November, December, January, February, March, and now April as any smaller pullbacks are continuously bought. Steady and guaranteed gains every month as markets continue to drown in liquidity and recovery optimism.

As such markets continue on their path of record disconnects of asset prices from the economy reaching over 201% vs GDP now:

As with any bubble, valuation metrics are disregarded and new narratives spring up to justify the price action and previous metrics are discarded as irrelevant. This process will work until it doesn’t and frankly it has to because equity inflows have taken on epic proportions with people piling into the highest valuations in history

Which brings us to an interesting technical area in the price action:

Fwiw, $SPX has reached the 1.618 fib extension I mentioned in January. It’s a little higher on futures but cash got within a couple handles. https://t.co/ccRatDLOfV pic.twitter.com/eVtMliS5Ph

But reaching this 1.618 fib extension so early in the year says something.

In the short term $SPY is again acting like it’s September 2020: 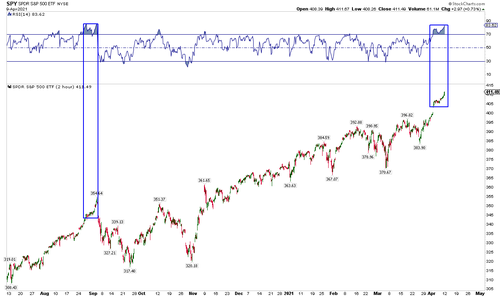 Overbought, stretched, vertical, with gains based on many unfilled overnight gaps beneath: 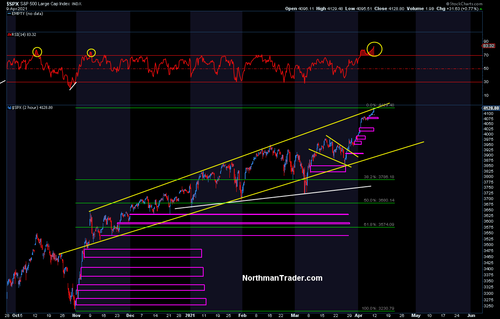 Back in September 2020 this type of action resulted in a 10.5% correction. Whether we will see something similar or worse at some point this month or next remains to be seen, but all things being equal one can now observe something we haven’t seen since February 2020. A divergence of equal weight: 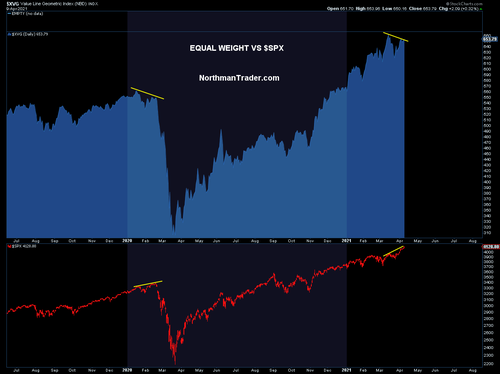 Note that as earnings season is upon us (and earnings reports will not only speak to results but also outlooks which will shed light on the reality of ramping inflation and rising cost structures) small caps are suddenly lagging:

So this steady as she goes non stop melt up is exhibiting some signs that something is afoot right as markets are reaching a key technical zone. My view remains: This market has an appointment with many open gaps to fill to the downside. On $SPX as well as on $VIX, hence, in my view, it’s important to know where these levels are as they may represent actionable pivot points to come.