Looking at the busy week ahead, the pandemic will remain in focus as the new case count is still moving higher at the global level even if the US now appears to have left covid behind. In the week ending last Friday April 9, the numbers recorded by John Hopkins University showed a 4.45m increase in cases globally, which compares with increases of 4.11m, 3.78m and 3.29m in the 3 weeks before that, so as Deutsche Bank notes, we’ve seen an acceleration in the past month, although the rate of increase is still shy of the peaks in December and January. Some countries have been hit particularly badly by the latest wave, with India seeing another record 152,879 cases on Saturday. Japan is another that’s seen some sharp rises lately, and the governor of Osaka prefecture said over the weekend that he could request a state of emergency be declared if the latest measures weren’t enough to stem the virus.

Over in Europe, there’s been more positive news in recent days, since the latest numbers from the biggest countries (Germany, France and Italy) indicate that cases have now begun to fall from their peak, albeit still at elevated levels. Furthermore, there are signs of the market narrative turning as the pace of vaccinations are continuing to pick up in the region, with the Euro strengthening +1.19% against the US dollar last week, in its best of 2021 so far, while 5y5y forward inflation swaps for the Euro Area closed at 1.57% on Friday, a level not seen since the very start of 2019. On top of that, the UK reported fewer than 2,000 cases yesterday for the first time since early September, which comes as today marks a notable easing of restrictions in England, with the reopening of non-essential retail and outdoor hospitality venues. Finally in other vaccine news, Pfizer and BioNTech said on Friday that they’d requested their Emergency Use Authorization for their vaccine in the US be extended to 12-15 year olds, following trial results that showed the vaccine was 100% effective among this group.

It’s a big week on the data side too, with a number of important releases out of the US set to offer more details on the strength of the recovery there. This comes against the backdrop of a very strong jobs report for March and an ISM services reading that was the highest since the series began back in 1997. 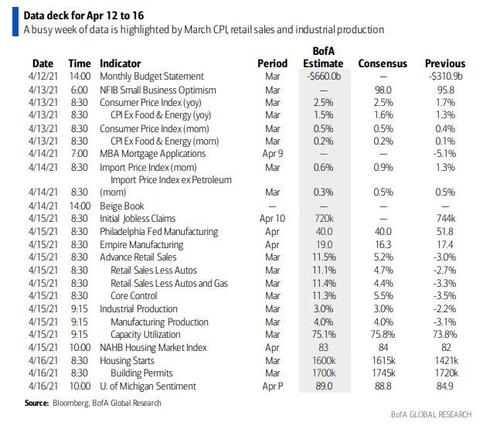 This week’s highlight will be the CPI report on Tuesday, as market participants have focused on the potential for a sharp rise in the reading over the months ahead. DB’s economists expect a blistering +0.48% month-on-month increase in the headline CPI, along with some strong releases elsewhere as well, with a projected +8.9% increase in retail sales for March thanks to the latest round of stimulus checks and payback from bad weather in February. As a reminder, BofA’s economists expect an even more blowout retail sales print, one in the 11%+ range.

The other big data release this week will come from China, where they’re releasing their Q1 GDP number on Friday. DB economists expect a surge in growth to +21.3% year-on-year, up from +6.5% in Q4, as the comparison will now be against the quarter when the pandemic first impacted the Chinese economy.

On the central bank side, we’ll have to wait until next week before the latest round of policy decisions, with the ECB announcing a week on Thursday, before the Fed and the Bank of Japan follow the week after that. Nevertheless, this week is the last chance various Fed speakers will have to offer their thoughts before their blackout period begins on Saturday, and markets will be looking out for Fed Chair Powell on Wednesday, who’s giving an interview at the Economic Club of Washington, as well as from Vice Chair Clarida later that day, who’s giving a speech on the Fed’s new framework and outcome-based forward guidance. In terms of what to expect, our US economists are expecting them to reiterate their familiar inflation mantra, in that they’ll look through the upcoming sharp rise in the year-on-year growth rate of consumer price measures, along with the “transitory” spikes caused by temporary supply-demand imbalances as the economy reopens.

It will be a busy week for US Treasury issuance, with the US auction cycle starting today with $58BN in 3-year notes auctioned off at 11:30am ET, followed by $38BN 10-year reopening at 1pm also today; It concludes with $24b 30-year reopening Tuesday.

Elsewhere, the latest earnings season will kick into gear over the week ahead, with the highlights including a number of US financials. In their preview of the Q1 season, our asset allocation team write that they see S&P 500 earnings coming in 7.5% above consensus, which although lower than the last 3 quarters, would still be well above the historical average (+4%). Looking at the biggest names releasing this week, they include JPMorgan Chase, Wells Fargo, Goldman Sachs and Tesco on Wednesday. Then on Thursday we’ll hear from UnitedHealth Group, Bank of America, PepsiCo, Citigroup, Charles Schwab, BlackRock and Delta Air Lines. And on Friday, releases will include Morgan Stanley and BNY Mellon.

Finally, as Goldman summarizes, the key economic data releases this week are the CPI report on Tuesday and the retail sales and Philadelphia Fed manufacturing reports on Thursday. There are several speaking engagements from Fed officials this week, including speeches from Powell, Clarida, and Williams on Wednesday.