On Monday Iran has formally laid blame on Israel for sabotaging its Natanz nuclear site following a Sunday blackout which brought its operations to a halt – believed to possibly be part of a cyberattack – and which some reports say will set back Iran’s enrichment ability by at least nine months, based on unnamed US and Israeli intelligence sources.

However, Iranian nuclear energy chief Ali Akbar Salehi has claimed that a back-up emergency power system has successfully offset the power outage, saying, “Enrichment of uranium has not stopped in the site.”

After throughout the day Sunday there was finger pointing in Tehran toward Israel, a statement by Foreign Minister Javad Zarif Monday marked the first high level explicit blaming of Israel for the sabotage attack, which was earlier dubbed “nuclear terrorism”. Zarif said, “The Zionists want to take revenge because of our progress in the way to lift sanctions… We will not fall into their trap…We will not allow this act of sabotage to affect the nuclear talks,” he said as cited in state TV. 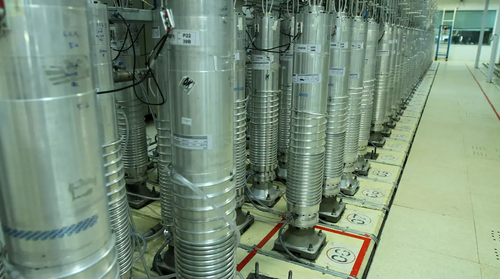 “But we will take our revenge against the Zionists,” he added, which comes on the heels of Iran’s nuclear energy chief Salehi underscoring that “Iran reserves the right to take action against the perpetrators.”

Meanwhile, amid conflicting reports that there was either a blast or a cyberattack mounted (or perhaps both) which caused the sudden blackout, Reuters reports these additional details which have come to light:

Multiple Israeli media outlets have quoted unnamed intelligence sources as saying the country’s Mossad spy service carried out a successful sabotage operation at the underground Natanz complex, potentially setting back enrichment work there by months. Israel has not formally commented on the incident.

…Iran’s semi-official Nournews website said the person who caused an electricity outage in one of the production halls at the underground uranium enrichment plant had been identified. “Necessary measures are being taken to arrest this person,” the website reported, without giving details about the person.

In the wake of this latest incident and others like the recent Red Sea mine attack against an alleged Iranian “spy ship” – also apparently conducted by Israeli intelligence, a number of observers have pointed out Iran has lost its deterrence capability.

In past few days, Israel has reportedly:

This is a “shadow conflict” that increasingly is spilling into open daylight.

Similar to what’s long been happening in Syria, it appears Israel is now able to mount severe sabotage attacks against the Islamic Republic at will, without fear of major retaliation. Of course this comes at the most sensitive time of ongoing talks with JCPOA signatories in Vienna, with progress also reportedly being made albeit “indirectly” with Washington as well.

But that appears to be the point behind the Israeli disruptive and destabilizing actions: not only does Tel Aviv want to see Iran’s nuclear capabilities permanently curtailed, but it wants to derail the Vienna talks by any means.