How State Legislators Are Working To Reign In The Empire

How State Legislators Are Working To Reign In The Empire

Fed up after years of relentless National Guard deployments in undeclared wars, state lawmakers across the country are pushing legislation that would prohibit the use of Guard units in combat zones without a formal declaration of war by Congress.

The bills are being promoted by BringOurTroopsHome.US, a self-described organization of “right-of-center” veterans working to end American involvement in “endless wars” and restore congressional authority over war-making. The libertarian 10th Amendment Center is also backing the cause. 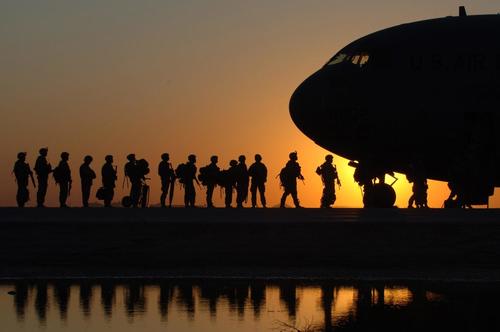 The proposed laws would require governors to determine the constitutionality of orders that place Guard units on federal active duty; where they’re deemed unconstitutional, the governor is required to take action to prevent the unit from being surrendered to federal control and sent into harm’s way.

The first “Defend the Guard” bill was conceived and introduced by Air Force veteran and West Virginia state legislator Pat McGeehan. While no state has enacted the law yet, interest is spreading widely, with legislators now pushing the measure in 31 states.

BringOurTroopsHome.US is led by Dan McKnight, a 13-year veteran of the Marine Corps Reserve, active duty Army and Idaho Army National Guard whose military service ended after he was injured in Afghanistan.

McKnight and many other veterans leading the drive against the War on Terror are from the right side of the political spectrum. That’s a sharp contrast to the typical antiwar veteran of the Vietnam era, but McKnight says vets from both wars share a common experience.

Today’s veterans “are coming home and saying the same thing (Vietnam vets did): ‘What was the point of that? What was our mission? We have no mission, we have no definition of success, we have no clear path to victory, we have no idea what victory means and we’re there without a constitutional authority to send us there’,” he says.

“Every one of us raised our hands and swore an oath to the Constitution…and when it says Congress shall be the only body to declare war, we take that to heart. And when Congress doesn’t do it, we understand bad things can happen: long, endless foreign misadventures,” says McKnight.

In a 2019 Pew Research poll, 64% of veterans said the war in Iraq wasn’t worth fighting; 58% said the same of Afghanistan. A January Concerned Veterans for America/YouGov poll found two-thirds or more of veterans support full withdrawals from both countries.

“The right-of-center veterans are now echoing the message of left-of-center veterans, and it’s hard to ignore when veterans from the entire political spectrum are saying the same thing: Enough already—if you want us to go and bleed and die and spend our lives and your treasure in a foreign land, then Congress should put their name on the line before we put our boots on the ground,” McKnight says.

That’s what the Constitution demands. In an impassioned speech at the West Virginia legislature last month, McGeehan quoted James Madison: “The Constitution supposes what the history of all governments demonstrates, that the executive is the branch of power most interested in war and most prone to it. It has accordingly, with studied care, vested the question of war in the legislature.”

The National Guard has played a major role in America’s post-9/11 militarism: As recently as December, more than 57,000 Guard members were deployed around the world. The federal government’s reliance on the National Guard makes state legislatures an intriguing second front in the drive to curtail the War on Terror. “Defend the Guard” laws also give state lawmakers a rare chance to influence foreign policy—and to impose consequences for the executive branch’s usurpation of war powers.

What I Told the Montana State Senatehttps://t.co/1rbsOKTCzd

The heavy reliance on the Guard takes a toll on soldiers, families, neighborhoods and states. The intense pace of National Guard deployments was underscored at a recent Defend the Guard hearing in South Dakota: While opposing “Defend the Guard,” the state adjutant general acknowledged that, during the entire Global War on Terrorism to date, the state has had all its troops home for just 42 days.

McKnight has friends who’ve done a staggering 12 or 13 overseas National Guard deployments. Beyond the risk to life and limb, and the hardships imposed on individuals, families and marriages, he says communities also pay a price.

Guard members “are police officers, tradesmen, mechanics, schoolteachers, attorneys. (When) they have to leave that job behind, it puts a burden on the community,” says McKnight. Upon their return, Guard members are generally guaranteed the option to reclaim their jobs—but that sometimes means displacing those who filled their positions while they were away, compounding the disruptive effect.

The Empire Strikes Back

When Defend the Guard measures are introduced in state legislatures, the national security establishment and its allies emerge to defend the status quo—by hook or by crook. In South Dakota, McKnight says, “the military-industrial complex…sent a two-star general to testify…and made all kinds of threats, and insinuated the state would lose their National Guard if they passed this bill, which is simply not true.”

Weeks ago, Republican Idaho Representative Joe Palmer, who chairs the state’s Transportation & Defense Committee, seemed to resort to underhanded tactics to kill a Defend the Guard bill. He put the measure to an initial procedural vote in the committee, and declared it to have failed by voice vote. Video of the proceedings, however, shows the result of the voice vote to be unclear at best, and McKnight says his group’s post-vote polling of members suggests the measure would have advanced had Palmer taken a recorded vote.

If Palmer didn’t already know he should play fair with veterans who are trying to prevent fellow citizen-soldiers from dying in unconstitutional wars, he may be learning that lesson now: McKnight says his group facilitated an emergency meeting of the GOP committee in Palmer’s home town, which is now considering a resolution censuring Palmer for his conduct.

“If you want to play parliamentary tricks and the price of your tricks is the blood of my brothers and sisters who (deploy) over and over again, then we’re going to take some blood of our own, and we’re going to do that the way politicians understand, and that’s with voters in the primary and the general election,” says McKnight.

Sometimes, the establishment’s machinations are done away from cameras. In a 2015 interview, West Virginia’s McGeehan said he was summoned to a meeting in the Speaker’s office with the commander of the state National Guard. The general said he’d received a call from the Pentagon, threatening that, if Defend the Guard became law, West Virginia bases would find their way onto the list of installations targeted for closure.

“When we pushed the Defend the Guard bill in Wyoming last year, she or her staff contacted members of the Wyoming legislature and said, ‘If this passes in Wyoming, I will personally see to it that two C-130 aircraft are stripped from Wyoming and sent to Texas’,” says McKnight, who was in Cheyenne to support the bill, along with U.S. Senator Rand Paul.

Bethany Baldes, Wyoming state director of BringOurTroopsHome.US, was also on hand. She too says lawmakers told her they received calls from Cheney’s office that included threats to send new C-130 cargo planes to Texas. (Cheney’s communications director has not replied to an invitation to comment on this story.)

The measure failed, 35-22. A statement signed by a group of Wyoming senators opposing the measure seemed to turn logic on its head by claiming the bill “calls into question Wyoming’s support for our soldiers and airmen in the National Guard.” That episode was McKnight’s second jarring encounter with Cheney, whom he describes as a “warmonger heiress of a military-industrial fortune.” Months before, he and other veterans met with Cheney in Washington to urge her to support the withdrawal of U.S. forces from Afghanistan.

“We went into Liz Cheney’s office and we asked her, ‘What conditions must be met on the ground for you to support ending the war in Afghanistan and bringing our troops home?’ And she said, ‘I don’t think I could ever support that position’.”

Pressing the issue, the veterans asked Cheney how long troops should remain. “She looked us stone-faced in the eye and said, ‘Forever. American troops will be in Afghanistan forever’,” says McKnight. “That’s when we decided it was time to step away from the swamp and work in the states, and force the states to force Congress’s hand.”