Why Are Initial Claims So High – Explaining “The Jobless Claims Puzzle”

Why Are Initial Claims So High – Explaining “The Jobless Claims Puzzle”

There has been an odd divergence in the US labor market: while both BLS nonfarm payroll surveys (Household and Establishment) telegraph an increasingly stronger jobs market, a signal confirmed by the latest near-record print in job openings, the labor department’s initial claims data has been stubbornly sticky to the upside, indicating at least 18 million people receive some sort of benefit, far above the official number of unemployed people according to the BLS… 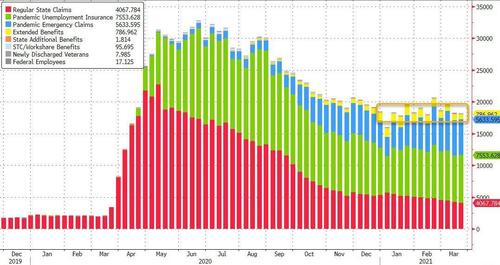 … and with the weekly initial claims now roughly 3-4x higher than their pre-covid levels, there are those such as BofA’s Michael Hartnett, who conclude that the US may have spawned a “new welfare state” hidden in the outlier number of new job claims every week. 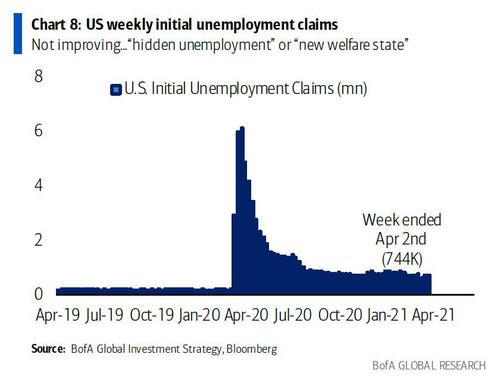 So is this bizarrely high number of weekly claims the back door through which socialism entered the US?

Addressing this question, JPMorgan’s Michael Feroli writes today that “one of the puzzles of US labor market data is the difference in messages being sent by the level of initial claims for unemployment insurance and almost every other employment indicator.”

For example, in the latest weekly figures 744,000 filers claimed jobless benefits, higher than at any point prior to the pandemic, including the Great Recession and the early 1980s recession. This is occurring even as the unemployment rate is down to 6.0%, job growth is booming, and the JOLTS measure of layoffs is at the low end of the historical range.

One clue to resolving this puzzle according to Feroli “is to stress the ‘claim’ in jobless claims. When someone files for benefits they are claiming they are eligible for unemployment insurance. It’s the state labor agencies, however, who actually determine whether the claimants truly are eligible.”

In addition to publishing initial claims for unemployment insurance, the Department of Labor also publishes the number of first payments, which is the number of workers who have filed for benefits and were actually determined to be eligible to receive benefits. These data are reported monthly and with a longer lag than initial claims.

Well, the number of first benefits paid in February was reported today, and as one may expect, it was quite surprising: while historically, about 45% of initial claims resulted in a first payment of benefits… 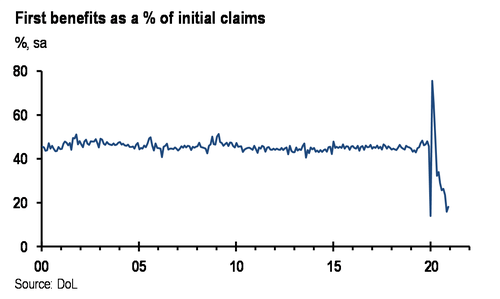 … over the last few months, fewer than 25% of initial claims generated a first payment of benefits.

Why is this so? One reason according to JPMorgan is that the $300 weekly bonus payments are encouraging more people to give filing a shot—the payoff from a successful claim is significantly greater than before the pandemic. This is an extension of the same phenomenon we discussed yesterday in “How Trillions In Stimulus Sparked A Historic Job Market Crisis“, when we noted that in an economy where 100 million people are outside the labor force, “there are absolutely no job seekers.”

In any event, the JPM economist writes that had the number of claimants been consistent with the historical relation with first payments, then the recent jobless claims figure would have been 330,000. This, to Feroli, seems a little more reasonable: the last time weekly claims were at least this high was in 2014, when the unemployment rate was 6.2%.

That said, as the economist concludes, the new configuration of the level of initial claims relative to other labor market indicators may be with us for a while because “the weekly $300 benefits continue through early September, which could continue to attract a larger than usual number of filers.” In short, expect a far higher number of initial claimants… even if the number of claim recipients is far lower.