Janet Yellen’s pitch during the spring meetings of the IMF and World Bank this week for a new global minimum tax rate was met with applause from the EU and a commitment from the G-20 to collaborate on a new framework, with an ambitious goal of finishing by the summer. The tax, according to Yellen, would help the US raise $2.5 trillion over 15 years, paying for the entirety of Biden’s $2.25 trillion “American Jobs Plan”, not to mention help prevent an exodus of job-destroying and economy-crippling corporate “inversions”. 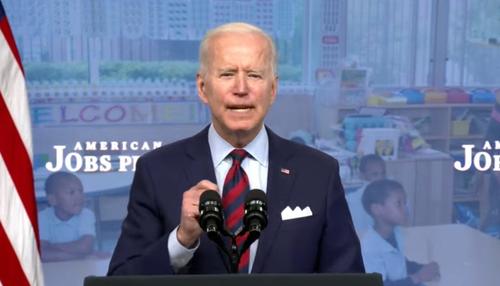 Markets didn’t exactly celebrate when headlines about Yellen’s proposal, and the international community’s reaction, started hitting the tape. But as the investing community wait more information about the proposal, the FT has published more details gleaned from documents shared by the US with 135 countries as the US prepares to lead negotiations through the OECD, the forum where the negotiations will play out.

The reason for the OECD’s role is obscure: for the last four years, the OECD’s developed-nation members have already been discussing a revised global tax framework to help even the competitive playing field and destroy incentives for companies to flee to tax havens.

Here’s an outline of the US pitch as it stands, according to the documents obtained by the FT. Essentially, Washington is offering to allow countries that agree to the tax to raise taxes on big tech, as it drops threats to impose tariffs on countries that have been weighing a digital tax on US tech giants operating in their markets.

An agreement at the OECD would allow Joe Biden’s administration to increase corporate taxes on US companies without fear of being undercut by other countries because it would include a widely applied global minimum tax rate.

The offer from Washington reflects Biden’s broader goal of ending what officials have described as a race to the bottom on global taxation that has deprived governments of revenue needed to fund basic services and investments.

The Trump administration had insisted on a “safe harbour” provision that would make compliance by US technology groups voluntary. Biden dropped that demand, but this week’s proposal offers a new solution.

The US Treasury is now offering a formula in which only the very largest and most profitable companies in the world would be subject to the new rules, regardless of their sector, based on their level of revenue and profit margins. These would probably include about 100 companies, comprising the big US tech groups as well as other extremely large multinationals.

The proposals have already been shared with the OECD, which is convening the negotiations and is trying to bring countries together to generate the outlines of a global deal by the summer.

Pascal Saint-Amans, head of tax administration at the OECD, welcomed the US proposals. “This reboots the negotiations and is very positive,” he said. “It is a serious proposal with a chance to succeed in both the [international negotiations] and US Congress. Peace is more important than anything else and this would stabilise the [international corporate tax] system in the post-coronavirus environment.”

Saint-Amans added that the proposal was likely to raise as much revenue for other countries as the OECD’s own suggestion while also allowing the US to raise the money it wanted from its largest companies.

While most EU members along with the UK have welcomed the US plan, Ireland has conspicuously declined to signal its approval or disapproval. The country has successfully leveraged its low headline corporate tax rate (currently 12.5%) to successfully attract foreign companies like Apple, which famously became embroiled in a tax spat with EU authorities over the taxes (or lack thereof) assessed by the Irish government.

According to the plan as described by the FT, America’s tech giants could be open to a major tax hit from Europe, but they won’t be alone. Financial services giants and other American multinationals will also see taxes rise substantially in foreign markets.

“Together we can use a global minimum tax to make sure the global economy thrives based on a more level playing field in the taxation of multinational corporations, and spurs innovation, growth and prosperity,” Yellen said in her first major speech since becoming Treasury secretary.

As we mentioned earlier, talks through the OECD have been going on for years. So far, they have focused on two proposals: a minimum tax and a formula to determine where multinational companies get taxed and on what income. In total, the twin planks, dubbed Pillars One and Two, are meant to supplant digital services taxes on major American technology companies like Google and Facebook that some nations have already enacted on their own, forgoing international cooperation.

Some tax experts believe Washington has “good standing” to push the global minimum tax because of the minimum tax it implemented on American companies in 2017 for their global intangible low-tax income, known as GILTI.

G-20 countries have committed to reaching agreement through the OECD talks by midsummer. However, officials inside Treasury have told reporters that many obstacles to such an “ambitious” agreement remain and that calling for a historic agreement to be completed in just a few months time is still a tall order.

While the global tax is essential to help clear a political path for Biden’s ‘great society’-style reforms (he’s hoping to spend at least $3 trillion, spread across two packages, the first of which is the $2.3 trillion “infrastructure” plan known as the “American Jobs Plan”) it’s possible still that even the US might not get on board, since convincing Congress could be among the biggest challenges facing Yellen.

The question now is ‘how much faith will markets place in the mid-summer deadline’? And will failure to reach an agreement prompt a re-pricing in future tax impact?