Macro Risks To The Stock Market Are Mounting

Macro Risks To The Stock Market Are Mounting

Authored by Jesse Felder via TheFelderReport.com,

In preparing for an interview with Macro Voices this week, I put together a brief chart book. The following is a preview of what I’ll be discussing with Erik Townsend on the podcast.

Part of the runup in stock prices over the past year is due to the rebound in earnings we will see over the next few quarters. However, now that interest rates, oil prices and the dollar index have each been rising for some time, earnings growth will almost certainly peak and rollover next year, falling back into negative territory. As the stock market discounts fundamentals roughly 18 months into the future, according to Stan Druckenmiller, this bearish reversal in fundamentals could begin to affect stock prices relatively soon. 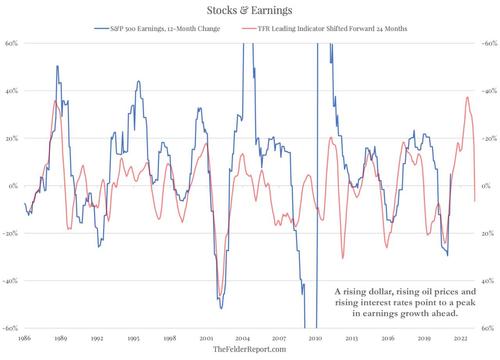 Longer-term there is a very real risk to record-high corporate profit margins. Over the past decade, corporations have benefitted at the expense of labor to an unprecedented degree. This is already leading to serious, “political problems,” of the sort predicted by Warren Buffett 20 years ago. The current administration appears to view rectifying this situation as its primary mandate and will, apparently, go about fulfilling it by, among other things, raising corporate income taxes and boosting a jobs market already showing signs of overheating. 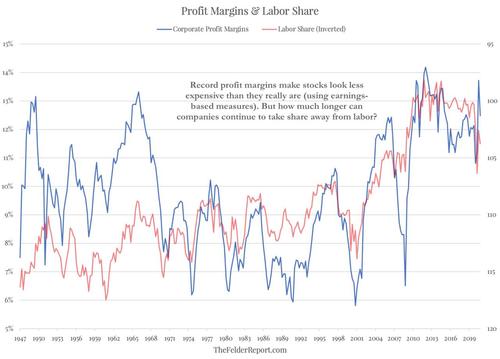 Finally, as Mehul Daya has demonstrated, history shows that rising interest rates regularly act as a bearish catalyst for both markets and the economy. To the extent that low interest rates and easy money have encouraged and incentivized the unprecedented amount of leverage supporting risk assets today, the reversal in rates, which is already more dramatic than anything we have seen in decades, threatens to reveal just how fragile markets and the economy have now become. 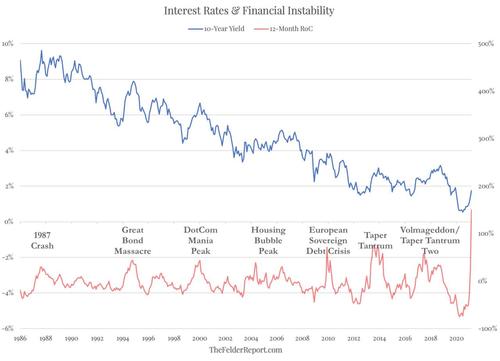 For the rest of the chart book and a more detailed discussion of these issues, check out the interview, scheduled to be released tomorrow, at MacroVoices.com.