According to a report in the London Telegraph, anyone wishing to drink in a pub garden in Britain from Monday (only the outside areas will open) will be forced to hand over their phone to venue staff who must check the individual is registered on the government’s tracking app. 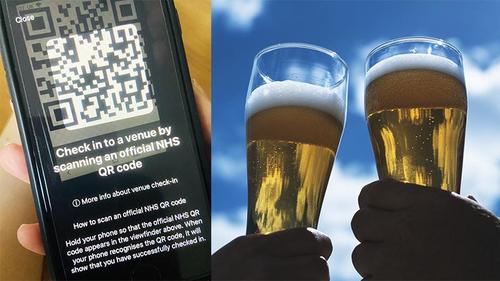 Venues will face fines of £1000 if they are found to be admitting people who have not registered on the NHS Test and Trace app with all their personal details and then scanned a QR code on entry to the outdoor portion of the venue.

The official government guidance notes “should someone choose to check in with the official NHS QR code poster, a venue should check their phone screen to ensure they have successfully checked in”.

The word ‘choose’ is odd because the guidance makes clear that it is mandatory for everyone to individually register on the app, or fill in a paper form.

There is no ‘choice’ in the matter.

Pubs have also been told to refuse entry to anyone they believe has given false details.

The only type of person who asks to check your phone are abusive and controlling partners.
So this does fit the government’s pattern of behaviour and mode of thought perfectly.

As we have previously highlighted, the much maligned ‘test and trace’ app is completely voluntary and authorities have no grounds to enforce its adoption legally. This is yet another example of how bureaucratic control freaks are simply inventing laws and justifying intimidation by means of coronavirus hysteria.

Prime Minister Boris Johnson ‘rewarded’ Brits recently by announcing that coming vaccine passports would not be required to enter pubs, however this policy directly undermines that and is essentially a small step away from being the exact same thing.

As we have previously noted, the vaccine passports are set to be integrated with the test and trace app via a QR code system. That has been the plan all along. Further dystopian systems, including biometric face scanning, are also being touted.

Responding to the latest developments, Madeleine Stone of privacy advocacy group Big Brother Watch, told The Telegraph: “Requiring every single person who enters a cafe or pub to show their phone screen and hand over their personal details poses a serious risk to privacy and data rights and is based on exclusion, criminal sanctions and police enforcement.”

“Businesses won’t be able to comply with this draconian new diktat as well as data protection law, which is why we’ve sent legal letters to the Department of Health and Information Commissioner’s Office as to whether these intrusive requirements are safe and lawful,” Stone added.

Venue owners have also expressed dismay at the guidance, expressing concern that it is unenforceable and will leave already stretched staff vulnerable to abuse from angry punters who don’t want to be tracked by the government just to have a pint of beer.

Surely handing someone a phone which is covered in germs to someone who’s handled presumably many phones that day is irresponsible due to the risk of the virus spreading?

Sorry but I usually remain muted but how the f is handing someone their phone which carries multiple variants of bacteria and viruses then going into a bar even classed as sane? This government is shocking.

Also from the same article: Drinkers will still have the option of registering manually by filling out a form with their name and telephone number.

Wider question is, why is T&T needed when everyone will be outside, where the risk is minuscule? Vallance himself said this.

And at the same time, i can’t even get it to work on my phone!