A couple of months ago, Brazil surpassed the US as the country reporting the most new COVID cases per day. Now, the stricken Latin American country is reporting as many as 4K deaths per day (for context, the US reported fewer than 500 yesterday).

The wide disparity in deaths between the US and Brazil has been attributed to mutant strains, some of which were first identified in Brazil, which researchers believe have lead to harsher symptoms, especially for younger people. Anyway, as the odds of Brazil overtaking the US in terms of total deaths grow (Brazil now has nearly 340K deaths compared with 555K in the US), its health-care system has been pushed to the breaking point.

When adjusted for population, Brazil looks set to surpass the US by the end of the week.

One Brazilian doctor suggested that Brazil’s outbreak seems like it’s powered by a nuclear reactor, according to Reuters. On Tuesday, the Health Ministry reported another 4,195 COVID-19 deaths in the past 24 hours, well above the country’s prior single-day record.

“It’s a nuclear reactor that has set off a chain reaction and is out of control. It’s a biological Fukushima,” said Miguel Nicolelis, a Brazilian doctor and professor at Duke University, who is closely tracking the virus.

Brazil has set daily death records every week since late February, according to Reuters, which blamed the mutants and the country’s “meager” social distancing guidelines. A team of researchers, citing a widely used forecasting metric, quoted by the newswire said Brazil could reach 563K total deaths by July 1.

Nicolelis and Christovam Barcellos, a researcher at Brazilian medical institute Fiocruz, are separately forecasting that Brazil could surpass the United States in both overall deaths and the record for average deaths per day.

As soon as next week, Brazil may break the record U.S. seven-day average for COVID-19 deaths, according to a model by the influential Institute for Health Metrics and Evaluation (IHME) at the University of Washington. The U.S. average for daily deaths peaked at 3,285 in January.

The IHME forecast does not currently extend beyond July 1, when it projects Brazil could reach 563,000 deaths, compared with 609,000 total U.S. fatalities expected by then.

Despite the scourge of the virus, and the fact that Brazil is presently contributing one in every four deaths to the daily global tally, Brazilian officials insist they could soon return the country to some semblance of normal, even as President Jair Bolsonaro’s reluctance to secure supplies of foreign-made vaccines, and his resistance to social distancing efforts, have been blamed for exacerbating the crisis. To be sure, Bolsonaro has shifted his approach in response to the surge in deaths, shaking up his cabinet and imploring Brazilians to get vaccinated. 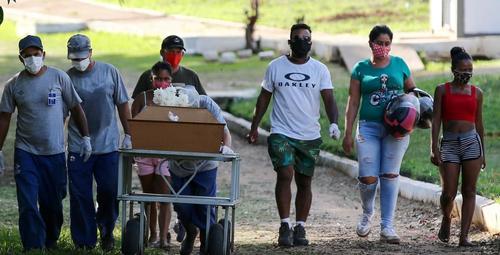 But will it be enough? Only time will tell. While Brazil isn’t the only major emerging economy struggling with a surge in case (India is reporting the most new daily cases since last fall), Brazil is one of the few countries still reporting such large numbers of daily fatalities.