Cuomo To Hit Richest New Yorkers With Top Tax Rate Over 50%, More Than Most Europeans Pay

Cuomo To Hit Richest New Yorkers With Top Tax Rate Over 50%, More Than Most Europeans Pay

That giant sucking sound is the richest New Yorkers – tired of virtue signaling in a city that is about to tax them as much as Europe’s socialist paradise – packing up their belongings and bailing for Palm Beach.

Why? Because days after we reported that New York Millionaires are about to be slapped with the highest income tax in the country, surpassing even the liberal utopia that is California, we now have some more details on what will likely be a 50% tax on the richest New Yorkers.

As Bloomberg writes, last August scandal-plagued NY Governor Andrew Cuomo begged the rich to return to the state, saying “‘we’ll go to dinner, I’ll buy you a drink, come over, I’ll cook.” What he didn’t say is that while he would pay for a drink, it’s the rich that would be stuck with the very hefty bill.

Details of said bill emerged on Tuesday when state lawmakers and Cuomo reached an agreement to raise taxes as part of a $212 billion budget deal. Under the deal, the top tax rate would temporarily increase to 9.65% from 8.82% for single filers earning more than $1.1 million. Income between $5 million and $25 million would be taxed at 10.3% and for more than $25 million it would be 10.9%. The new rates would expire in 2027. 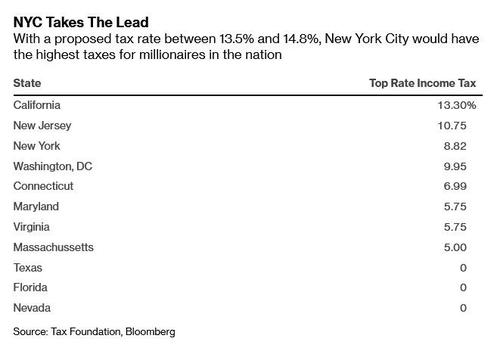 And with New York City residents also paying city taxes, the combined top rate for the highest earners would be between 13.5% and 14.8%, surpassing the 13.3% rate in California, currently the highest in the nation, as we reported previously.

Even though New York’s budget crisis never materialized, state officials are moving forward with a tax increase that will bring the top income tax rate in NYC to 14.776%.

The biggest risk is that high earners don’t come back post-pandemic. Why make it a self-fulfilling prophesy?

Lump in Federal Taxes and the increases would mean that the richest New Yorkers would be hit with a combined marginal rate of 51.8% — higher than levels in some European countries. 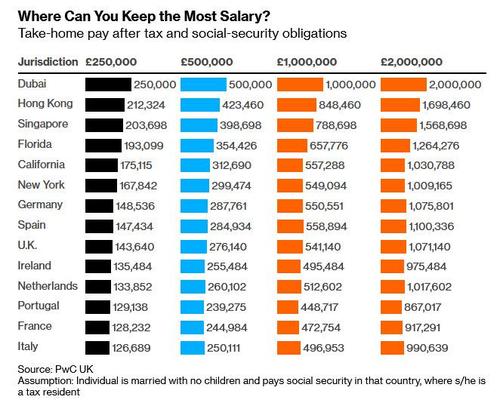 So with the highest taxes in the US to look forward to, will (former) New Yorkers rush back to the Big Apple? We doubt it:

“Employers and employees alike are increasingly mobile, and raising taxes on newly mobile taxpayers is a risky proposition,” said Jared Walczak, the vice president of State Projects at the conservative Tax Foundation. “High earners in particular have considerable flexibility, and many already temporarily relocated during the pandemic. Raising tax rates on the most mobile cohort of taxpayers is a good way to lose many of them outright.”

New York’s move is the latest attempt to target the wealthy in the U.S. to fund budget shortfalls or future spending.

Meanwhile, those earning more than $400,000 a year are already bracing for higher federal taxes from the Biden administration, which has also proposed raising the corporate levy to 28% from 21%. However, as Bloomberg explains, increasing levies at the state level though brings a different dynamic.

Prior to Covid-19, there were concerns that residents would leave when a tax overhaul passed by Republicans and signed by President Trump in 2017 capped state and local tax deductions at $10,000.

Then the pandemic hit and some of the most affluent people in the city fled to other parts of the state, such as the Hamptons, while others moved to Florida or Texas, which don’t levy income taxes. The exodus has fired up real estate markets and even led New York City restaurateurs to open Palm Beach locations.

Now, with the vaccine increasingly prevalent, there are signs some people are returning… but not many if all they have to look forward to are huge tax spikes. As such, there’s concern that many of NY’s richest will make their moves permanent, especially as low-tax states court hedge funds and banks.

“Cuomo is making a bet that the wealthy won’t leave the state even if he raises taxes on them,” said Andrew Silverman, a tax analyst with Bloomberg Intelligence. “That’s a risky bet. It’s almost certain that people will leave the state and the city as a result of these tax increases. What’s different this time is that jobs are so mobile that people, especially wealthy people, don’t have to work where they live.”

The total number of those leaving may be tiny compared to the overall population, but they are the ones paying the most taxes and New York City and New York state get a disproportionate share of tax revenue from the wealthy. The state is home to more than 90 billionaires, according to the Bloomberg Billionaires Index, and the city has more than 30,000 millionaires.

The top 1% of New Yorkers reported a combined $133.3 billion in income in 2018, the latest year of data available, according to the city’s Independent Budget Office. They paid $4.9 billion in local income taxes, making up 42.5% of total income tax collected by the city.

It remains unclear if New York state will get help from the Biden administration to repeal the cap on the SALT deduction; so far it appears that Biden is unwilling to make this concession which would infuriate the socialist wing of the Democrat party.