Can The US Borrow Its Way To Higher Growth? (Spoiler: No)

Can The US Borrow Its Way To Higher Growth? (Spoiler: No)

In its chart of the day, DB credit strategist Stuart Sparks writes that history teaches us that although investments in productive capacity can in principle raise potential growth and r* in such a way that the debt incurred to finance fiscal stimulus is paid down over time (r-git turns out that there is little evidence that it has ever been achieved in the past.

The chart below illustrates that a rising federal debt as a percentage of GDP has historically been associated with declines in estimates of r* – the need to save to service debt depresses potential growth.

As Sparks concludes, and this will probably get him kicked out of his favorite neighborhood club for confused Keynesians, “the broad point is that aggressive spending is necessary, but not sufficient. Spending must be designed to raise productive capacity, potential growth, and r*. Absent true investment, public spending can lower r*, passively tightening for a fixed monetary stance.” 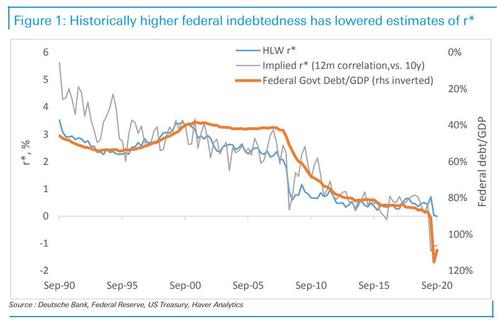 What Sparks won’t say so we will, is that spending trillions on pork and more trillions on glorified government grift under the pretext of stimulus for the people does anything but raising productive capacity. So sadly, all the US will have after the current period of fiscal insanity is over is the biggest ever sugar high hangover, and enough debt to trigger WWIII.