Taibbi: On The Miserable Necessity Of Doing Censorship Stories In Pairs

Taibbi: On The Miserable Necessity Of Doing Censorship Stories In Pairs

For roughly half a year, I’ve been running a series of interviews here on TK called “Meet The Censored,” with the aim of highlighting the scope of a growing Internet censorship issue. 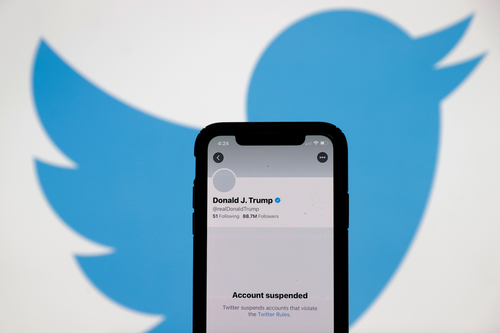 From now on, “Meet the Censored” articles will be released in pairs. The speech debate has become so partisan that people now often cheer news that this or that person has been kicked off the Internet — this is an increasingly common reaction. When I profiled World Socialist Web Site writer Andre Damon, conservatives complained that his site wasn’t representative of the censorship problem, and I was showing bias. When I profiled Irreversible Damage author Abigail Shrier, leftists argued I was carrying water for the intolerant right.

I don’t particularly care whom people think I’m carrying water for, but in the effort to keep eyes on the ball, I’m going to release these stories in matched sets: one on the right, one on the left, one conservative, one not, etc. The first two such pieces, coming out today, will feature the non-profit investigative outfit U.S. Right to Know, and well-known conservative reporter Paul Sperry.

Nearly three years ago, when I first started covering this stuff, I realized the censorship issue would be a tough sell in the Trump era.

For blue-leaning audiences, news that companies like Facebook and Google had begun shutting down or de-ranking accounts in ways we’d never seen before was, to my initial shock, mostly perceived as a good thing. In the wake of Trump’s election, many Democrats believed something had to be done about “fake news,” Russian trolls, and, especially, inflammatory right-wing speech.

Polls showed 40% of millennials believed the government should be allowed to limit speech offensive to minorities, a number significantly higher than the one for either Baby Boomers (23%) or GenXers (27%). If those levels of support among younger voters existed for outright government censorship, how would that audience ever be convinced to care about private companies zapping political accounts?

The issue was such a non-starter with younger, blue-leaning audiences that when I did a feature about Facebook’s 2018 purges of so-called “inauthentic” accounts, Rolling Stone headlined the piece, “Who Will Fix Facebook?”, as if to disguise what the story was actually about. (I got letters from disappointed readers who’d been drawn in by the headline, hoping to read a story demanding that Facebook wipe out more right-wing/conspiratorial content). After the expulsion of Alex Jones and Infowars from Apple, Facebook, Google, and Spotify, it seemed many younger readers didn’t see a problem with increased content moderation. If anything, Silicon Valley didn’t remove enough obnoxious content.

Conservative readers from the start have been significantly more unnerved by the content moderation movement, for the obvious reason that most higher-profile targets of tech crackdowns have been right-wing figures. After years of decisions like kicking Donald Trump off Twitter, suspending or banning figures like James Woods and Milo Yiannopoulis, and intervening to block access to the New York Post’s expose on Hunter Biden, the censorship issue in conservative media has usually been pitched as being a problem exclusive to them.

After the Hunter Biden story was blocked, Republican politicians like Mississippi Senator Roger Wicker and Colorado’s Cory Gardner hauled tech CEOs to Washington to face accusations of “bias.” At the much-covered hearing in October, Wicker railed at Twitter CEO Jack Dorsey. “Mr. Dorsey, your platform allows foreign dictators to post propaganda, typically without restriction,” he said, “yet you typically restrict the president of the United States.”

Ultimately, like nearly all problems in this country that have both bipartisan causes and an impact in all directions, the censorship issue has been chopped up into parts, in order to be marketed to different news demographics, and consumed as partisan grumbling.

Conservative outlets have sold the story as a conspiracy of Democratic politicians and “Masters of the Universe” tech companies. In mainstream outlets like the New York Times, meanwhile, the speech issue has usually been pitched as a chin-scratching intellectual dilemma: how much freedom can “civilized” society safely brook, in the age of figures like Trump and Alex Jones?

Often, you see the issue framed as an either/or, i.e. either a “Wild West” of no controls, or a more civilized regime of thoughtful moderation. In one Times editorial, Shira Ovide cheered the Apple App Store model of “utter lack of free speech,” saying few “credible people” would want our online world designed any other way:

It’s time to stop debating whether we want powerful gatekeepers vetting information. We do. We don’t want people to be able to shout the proverbial “fire” in a crowded theater, and we don’t want terrorists, stalkers, dangerous conspiracy theorists, and authoritarians to have free rein on the internet.

Humorously, that Times piece, with its obligatory reference to shouting fire in a crowded theater (a scenario which by now has happened in theory roughly ten billion times more than in reality), was forced to concede that Apple-style moderation can have a bit of a downside. For instance, Ovide wrote, Apple controls in China have resulted in bans of companies the government “believes break its laws,” like “some news apps, including The New York Times.” Apart from censorship of her own newspaper, ditching “the myth of free expression” was presented as mostly a good thing.

When this issue first started gaining steam a few years back, it looked like Facebook’s shutdowns of sites like Jason Bassler’s Free Thought Project or James Reader’s pro-Democratic “Reverb Press” might be algorithmic glitches, just as the zapping of a “No Unite the Right 2” page advertising an anti-nationalist counter-demonstration appeared to have been. The public was told the companies were mainly going after Russians and hate speech.

It’s now clear that’s not the case. One of the fundamental (and clearly intentional) elements of the crackdowns of the last few years has been the systematic de-ranking or removal of smaller, independent news sites. The pulling of raw footage and livestreams by outlets like Jordan Chariton’s Status Coup or Ford Fischer’s News2Share seems to indicate that platforms like YouTube and Facebook want to limit the power to use certain images or content to larger, corporate outlets like CNN, CBS, or the New York Times.

In other words, if the Charitons and Fischers of the world can sell their work to a big national outlet, mazel tov. If they choose to try to publish it on their own, they risk having their work pulled by Facebook and Google. It’s a journalistic Sophie’s Choice: either sell away your competitive advantage (i.e., your mobility and “on the ground” reporting) to a corporate rival, or put your financial fate in the hands of invisible, unreachable executives at places like YouTube, the type of people Chariton described as being harder to find than CIA operatives. Either way, you’re surrendering, involuntarily, to giant companies.

The reason going after independents matters so much is that “credentialed” media, when they screw up, tend to do so en masse. If you try to launder all content through a handful of big corporate players like CNN, MSNBC, and the Times, you’re virtually guaranteeing that the next WMD or Gulf of Tonkin or Russiagate reporting fiasco will go undetected for longer. The same reasoning applies to algorithmic changes that sharply reduced traffic at alternative sites like Antiwar.com or The World Socialist Web Site: putting a thumb on the scale to drive readers into more “mainstream” baskets just makes bigger outlets worse and less accountable.

Stories like Fischer’s and Chariton’s are important to help convince non-conservative readers of the seriousness of the censorship problem. On the other hand, avoiding the issue of censorship of conservative sites isn’t right, either. That absolutely is happening, even though the highest engagement numbers on Facebook continue to be enjoyed by people like Jordan Peterson and Dan Bongino.

It’s become so taboo on the blue side to express any concerns about censorship of conservative voices that it’s rarely even presented in the mainstream press as a legitimate issue, unless someone like, say, Bernie Sanders admits to being “uncomfortable” by the precedent of tech monopolies hitting the mute button on a sitting president of the United States.

The phenomenon we’re living through isn’t about partisan politics. The central problem is the speech landscape has been almost fully privatized, with the overwhelming majority of people getting information via a handful of key companies: Apple, Google, Facebook, Twitter, Amazon. That bottleneck makes it possible to control information in amazing new ways, especially since the companies have shown, from the zapping of Infowars to the paper-training of Parler, that they’re willing and able to work in concert, against any set of actors they deem unsuitable.

When Infowars was kicked off those platforms, huge percentages of people cheered, because who doesn’t hate Alex Jones? But who was kicked off Facebook, Apple, and YouTube was less important than the what and how: unaccountable, unelected private executives making major decisions about who gets to speak in a 100% non-transparent, unappealable process.

The same problem is inherent in the case of Trump’s Twitter ban, even though a strong argument can be made that Trump did repeatedly violate the company’s terms of service. The issue isn’t companies shutting Trump down, it’s that shutting a president down is even possible. As Sanders (and, sadly, few other politicians on his side of the aisle) pointed out, “tomorrow it could be somebody else who has a very different point of view.”

Moreover, the mission creep has been mind-boggling. Silicon Valley has gone from banning Trump for past concrete violations to future potential violations. Facebook just last week banned an interview of Trump by daughter-in-law Lara, declaring that “the voice of Donald Trump” will henceforth be removed, as the risk of allowing it to be heard at all is “too great.” In flash, content moderation went from enforcement of terms of service to Minority Report-style projection of future offense.

Furthermore, the bans on Trump almost immediately swam downstream and turned into bans of people covering Trump. In the same way that people like Fischer and Chariton were penalized for filming pro-Trump protesters, groups like the Freedom of the Press Foundation had their database of Trump tweets attacking the media temporarily removed from Google Docs. Only through sheer luck — the Foundation had contacts in Google — was the database restored.

This is a consistent feature of these stories, as Gary Ruskin of U.S. Right To Know discovered in the case of his own organization, which saw a sudden, catastrophic drop in traffic: people who experience suspensions or algorithmic changes find themselves frantically looking for backchannels into the Silicon Valley castle, to plead their cases. “It’s straight out of Kafka,” says Ruskin. “What door do I knock on?” If there’s a person who doesn’t think this is an insane way to manage the media business, I’d like to hear the argument.

Ten years from now, people will likely not have trouble realizing that putting five or six companies in charge of regulating all content was probably not a good idea, for all but a small handful of empowered actors. At the moment, the partisan angle is clouding the issue, as ordinary people are being conned into viewing speech as a giant turf war in which they have a rooting interest. News flash: you probably don’t.

In any case, more on all of this TK. Check for two new “Meet the Censored” features in this space in the next day.