As world leaders meet in Vienna this week to discuss the United States reentering the 2015-era Iran nuclear deal, Israel is voicing its concern over potential U.S. appeasement toward Tehran.

“We are troubled by any indication to return to the initial JCPOA nuclear deal which did not address many core issues. Namely, Iran’s continuation of uranium enrichment, the rejection of ‘anytime anywhere’ inspections, the legitimization of Iran’s nuclear process by 2030, Iran’s ballistic missile testing and Iran’s continued aggression in the region,” Israel’s former Ambassador to the United Nations Danny Danon told The Foreign Desk Monday.

Danon, who now leads Israel’s Likud political party, is referring to a PBS NewsHour interview in which U.S. Special Envoy for Iran Robert Malley made no mention of the administration’s former commitment to pursue a “longer and stronger agreement.” 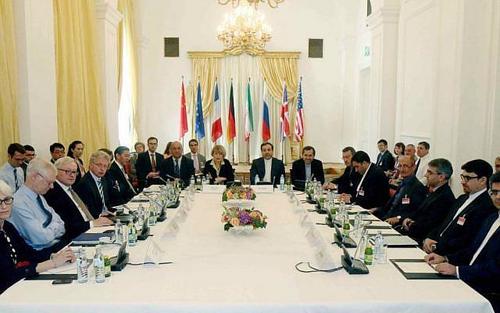 Those exact words were used in January when Secretary of State Blinken said the U.S. was committed to pursuing a long-term, securer agreement that would address the “deeply problematic” threats posed by the Iran regime that were not adequately covered in the initial 2015 JCPOA.

The U.S., Iran, Russia, China, and European partners will engage in indirect talks in Vienna to discuss the future of the 2015 nuclear deal Tuesday.

As Tehran continues to remain firm on its demand for full sanction relief prior to compliance, and alongside the regime’s refusal to make any changes to the original deal, the administration’s focus on strengthening the agreement appears to be waning.

Throughout the Malley interview, the message was continually sent that the Biden administration is heavily focused on getting back into compliance with the JCPOA on both the U.S. and Iran side; however, there was no mention of any further steps or whether the administration is still concerned about the deal’s shortcomings.

Malley explained that the primary goal now is to “reach an understanding with Iran” about how a “mutual return back into compliance” can be achieved, saying that if Iran is “prepared” to reverse its violations, the U.S. is “going to have to lift those sanctions that are inconsistent with the deal that was reached with Iran and the other countries involved in the nuclear deal.”

This will require the “painstaking work of looking at those sanctions and seeing what we have to do so that Iran enjoys the benefits that it was supposed to enjoy under the deal,” said Malley, further stating that a “maximalist position” in which “the other side has to do everything first” cannot be taken on either side.

Danon worries that if the U.S. revives the original nuclear deal, there will be serious consequences throughout the region.

“If we reignite the threatening 2015 deal we lose all leverage with Iran, and Iran’s extremist and murderous regime gains unwarranted credibility,” said Danon.

“What is needed now is a revised Iran nuclear deal rather than a return to the old and failed nuclear deal…We must address the challenges posed by the old deal and we must introduce new solutions to overcome these dangerous hurdles.”

Malley would not concretely say whether a deal with Iran would be possible if American detainees in Iran are not released, saying “we’re going to get them home, and we will do everything we can.”