“It’s Work-To-Live, Not Live-To-Work” – San Francisco Expats Say They Have No Regrets About Moving To Austin

“It’s Work-To-Live, Not Live-To-Work” – San Francisco Expats Say They Have No Regrets About Moving To Austin

Elon Musk has said he plans to move there. Late last year, Oracle, one of the biggest tech companies in the US, announced plans to move its headquarters to Austin from Silicon Valley. And since the start of the new year, others have followed suit.

As moe and more Silicon Valley tech workers decamp for Austin, more are finding that they appreciate the capital of the Lone Star State more than the City by the Bay. As Austin comes to represent a “land of opportunity” for tech bros tired of the Silicon Valley ultra-liberal monoculture, the Houston Chronicle interviewed five “tech industry professionals” including Salesforce alums who have worked in both places, to the CEO of Austin’s premier tech incubator. The consensus is that Austin is preferable to the Bay Area, both in terms of the labor market for tech jobs (employees feel like bigger fish in a smaller pond), the housing market, and the general culture of the city. 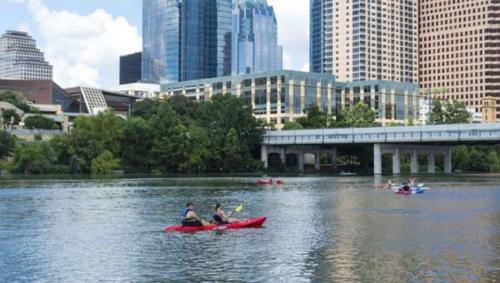 The consensus: the grass is definitely a different color – and for now, at least, it appears “very green.”

Vivek Sodera, co-founder of email client Superhuman, who recently moved to Austin, told the Chronicle that he appreciates that tech doesn’t dominate all other industries in Austin like it does in San Francisco.

Like San Francisco, Austin has plenty of issues of diversity, but on a professional level, you’re much less likely to find yourself at a bar surrounded entirely by tech workers.

“It was just everywhere in San Francisco, you’re running into somebody from Snowflake or Uber or whatever. In Austin, you’re free from that a little bit,” says Holly Firestone, who worked in Salesforce for several years in both cities, and now is the vice president of community for Venafi in Austin. “I have tons of friends that aren’t in tech, which is just not something you experienced in San Francisco at all.”

Anthony Brown, co-founder and CEO of music platform Breakr, moved to Austin in the fall and says the city allows talented tech workers the opportunity to build an even larger network.

“There’s less of the tech community here. So I feel like you can get connected to the right infrastructure faster in Austin. So I think that’s actually a competitive advantage for Austin; there’s enough high quality people here in the city that if you do come and you are in the tech ecosystem, that you can actually build a really powerful kind of network.”

A small pond, or what some tech investors have described as a “tier two city,” also has its drawbacks. For some (especially those working outside the tech world), the ubiquity of hoodie-wearing coders in San Francisco can be a negative, but that density is part of what’s allowed Silicon Valley companies to flourish. Some of that simply comes down to a matter of geography and the fact that not everyone is driving to work.

Joah Spearman, an Austin-based tech founder who launched travel recommendation site Localeur, said he has struggled to recruit “director- and VP-level talent”, though others say this “skills gap” is starting to close.

One Austin tech founder and CEO, Joah Spearman of travel recommendation site Localeur, has noticed that Austin does have a talent gap.

“There is not this deep bench of director- and VP-level tech talent in Austin. And there’s this belief that if there was that here, the companies that get to $200 million evaluations would get to a billion,” says Spearman.

Joshua Baer, CEO of Austin’s biggest incubators, explained that this gap is rapidly closing for one important reason: workers enjoy life more in Austin. As he explained, workers living in the city can still do “big things” professionally, but they can evade getting sucked into the “work to live” mindset that plagues the Bay Area.

And while Austin’s housing market has boomed in recent years (while the pandemic has hit the overstretched San Francisco property market extremely hard), it’s still much more affordable than the Bay Area.

But according to Joshua Baer, CEO of one of Austin’s biggest incubators, Capital Factory, that gap is getting smaller.

“The type of people that we’re attracting, certainly from my own personal experience and somewhat logically, are educated entrepreneurial people who can live anywhere and they’re choosing to come here and that’s a good thing. That’s going to fuel our talent. It’s bringing in people who have Silicon Valley ethos, you know, who think big and want to go do big things,” says Baer.

What makes Austin so appealing to many tech workers is that although you’ll still be able to do big things professionally, there’s opportunity for a richer personal life. To state the obvious, home ownership is much more achievable for transplants, however that’s caused a ripple effect that’s made it harder for many Austinites to own real estate (the average home price rose 10.1% in the past year to $433,493). It has also amplified long-running issues of racial diversity.

Instead of feeling like they are “property of their job”, Austinites can enjoy “a closer relationship with the city,” Baer added.

The rising cost of living in Austin is worthy of a story of its own, but the difference in culture between Austin and San Francisco is broader than just affordability. According to Spearman, much of it simply comes down to mindset, describing Austin as a “work to live” city, compared to the nonstop pace of San Francisco’s “live to work” culture.

“In more rigid tech cultures, from the moment you leave your house, to get in a bus or a van to go to Silicon Valley to work at Apple or Google or et cetera, you’re kind of like property of your job until you get back to your house,” he says. “There are people that live like that in S.F. Austin doesn’t have that.”

“I think there’s just something about the Texas vibe that makes people chill out and be a little bit more relaxed,” he says.

Quality of life and affordability may be the largest factors driving San Francisco tech workers to Austin, but it begs the question what will happen once they arrive. Many Austinites were already priced out of one of the nation’s hottest real estate markets years ago, but another issue is the effect on Austin culture at large. The exodus out of San Francisco can’t just be about leaving the problems of the city behind, but rather an active desire to become a part of something new.

“Being an Austinite is an experience. It’s about showing up and participating, being part of what’s happening in Austin,” says Baer.

Of course, as more people from Silicon Valley migrate to Austin, some worry that this could have a harmful impact on the city’s culture (as well as erode the relative affordability of real-estate). In the end, the only thing that might keep hordes of progressives from flooding into the Lone Star State might be fears about being caught in another deep-freeze.

Then again, with taxes set to rise in blue states like California and New York, tech workers might soon be making room for finance workers as financial firms expand their footprint in the southern US.