Bullish, But ‘There Be Dragons’

Bullish, But ‘There Be Dragons’

Over the last several weeks, we have discussed how the “negative money flow” environment was keeping a lid on prices short-term. To wit:

As such, hold positions early next week and look for weaknesses to add to exposures as needed.“

Such turned out to be the case as the markets slopped around early in the week. However, that changed as markets exploded to new highs on Wednesday and Thursday as portfolio managers charged back into the stocks sold off during the Archegos debacle. 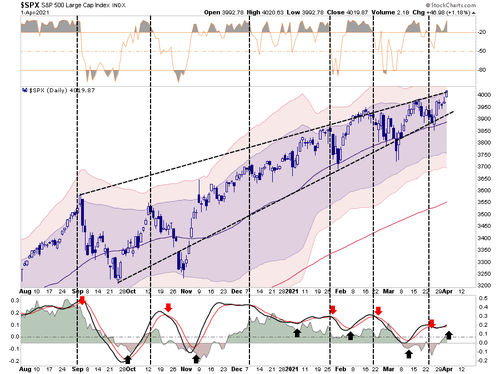 As shown, the break out to new highs for the S&P 500 confirmed the positive turn in “money flows.” Notably, the breakout got further confirmation from combined “money flow” and “MACD” buy signals. 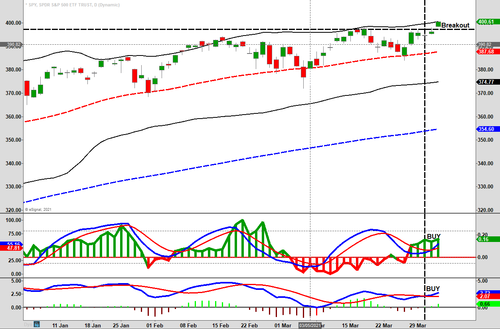 Yesterday’s “3-minutes” video goes into more detail about the turn of the “money flow” indicators as we enter one of the stronger months of the year.

Given the confluence of those “buy signals” and “seasonality,” we did increase exposure to portfolios over the last two weeks. 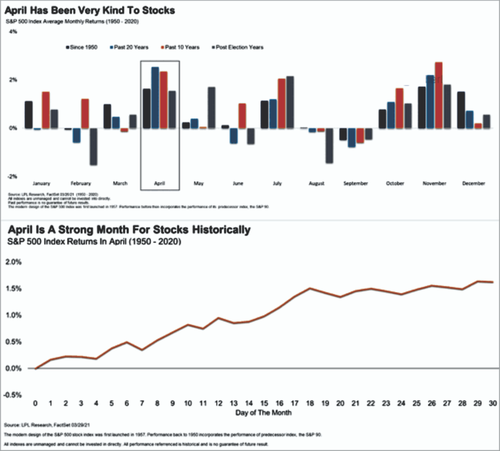 However, as we will discuss more in a moment, that increase in exposure does not come without risks.

As discussed last week, the dollar continued to gain strength and broke above the 200-day moving average. As shown below, sharp increases in the dollar tend to weigh on equity markets.

“The recent rotation to value has been primarily a function of a ‘weaker dollar,’ which boosts commodities. As noted, if economic growth does strengthen, leading to higher rates will attract foreign inflows into the dollar for a higher yield.Such also undermines corporate profitability, given that roughly 40% of corporate profits are from abroad.” 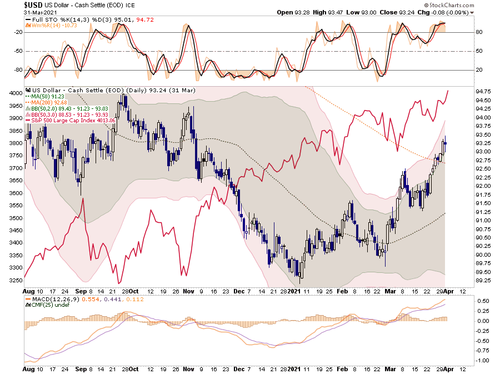 Secondly, the number of stocks trading above their 200-dma is at extremes. Historically, when the “rising tide lifts EVERY boat,” such has usually been near markets’ peaks.

Lastly, interest rates remain a key to much of the ongoing advance. Sharply rising interest rates have always, without exception, led to a market decoupling. It isn’t a question of “if” it will happen. It’s only an issue of “what rate” pops the speculation. 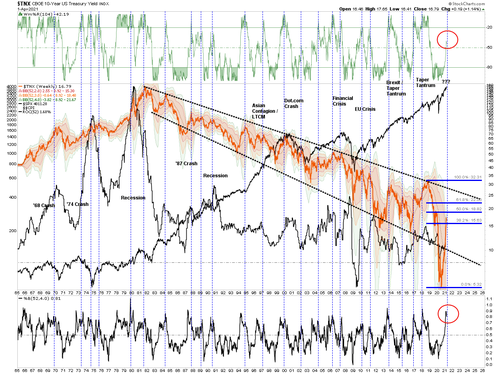 I know. It isn’t apparent.

“If you think there are risks, why increase exposure?”

As a portfolio manager for other people’s money, I get tasked with two primary jobs.

Therefore, I have to take measured “portfolio risk” to create returns but remain aware of the “risks” which could lead to a loss of capital.

On Thursday, I tweeted, as noted above, that we increased equity exposure due to the confluence of buy signals and the seasonally strong month of April. A response to that tweet provides the basis for discussing “portfolio management in a high-risk environment.” To wit:

@LanceRoberts I luv ur work. Very prof’l.
Having said that, & I mean no disrespect, I wud never have you invest my $$. I just can’t wrap my head around someone who says this is the most overvalued mkt (by EVERY msr) EVER, & then ADD to longs bc it is April. Cogntv Disonance

I certainly understand his dismay. With valuations at some of the most extreme levels seen only outside of the “dot.com” bubble, why would you invest capital now? 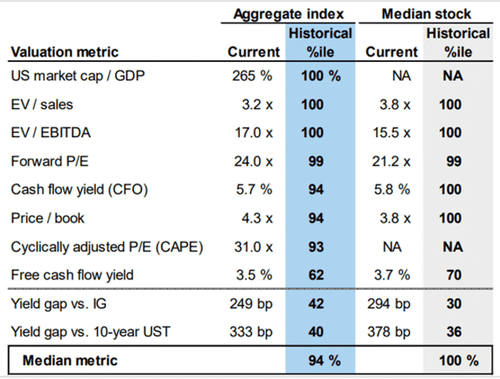 To clarify, we have to distinguish between time frames, risk, and expected outcomes.

What is the definition of “risk?”

The chance that an investment will lose value

Increasing risk does not suggest a positive outcome? We can use a mathematical example of “Russian Roulette” to prove the point.

The number of bullets, the prize for “surviving,” and the odds of “survival” are shown:

The point is simply while “more risk” equates to more reward, the consequences of a negative result increase markedly.

Pascal concluded, given that we can never prove God’s existence, it’s probably wiser to assume he exists because infinite damnation is much worse than a finite cost.

Risk does not equal reward. “Risk” is a function of how much money you will lose when things don’t go as planned. The problem with being wrong, and facing the wrath of risk, is the loss of capital creates a negative effect to compounding that you can never recover.

There is an essential aspect to the “power of compounding” the media never discusses. It ONLY WORKS when you do not lose money. As shown, after three straight years of 10% returns, a drawdown of just 10% cuts the average annual compound growth rate by 50%. Furthermore, it then requires a 30% return to regain the average rate of return required. In reality, chasing returns is much less critical to your long-term investment success than is commonly believed.

Understanding what “risk” takes us to this vital point made by Michael Lebowitz in “Zen And The Art Of Risk Management.”

“In the short-term, price changes of stocks are based solely on liquidity, or the balance of buyers and sellers. Over long periods, price changes are dependent on valuations. The following scatter plots compare CAPE valuations to subsequent 10-year and 3-month returns to highlight this fact.” 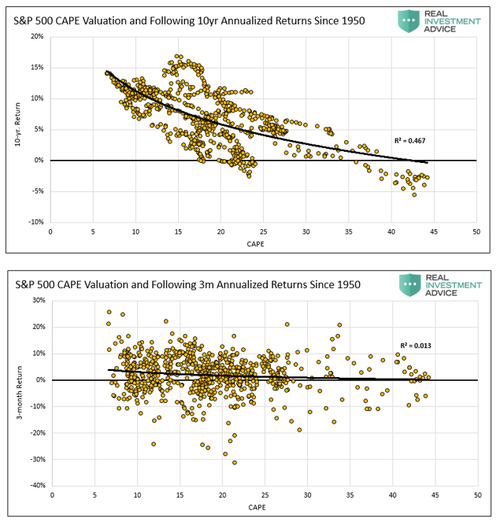 Such is an important point relative to our reader’s comment.

In the short-term, worrying about high multiplies isn’t conducive to creating portfolio returns from one month to the next. As such, it isn’t “cognitive dissonance” that we are increasing exposure in a month that has a very high statistical probability of positive returns over the next 30-days.

The problem in discussing “investment risk” is that such commentary is summarily dismissed as being “bearish,” By extension, such means we must be either sitting in cash or short the market. In either event, I have “missed out” on the last advance.

Such reminds me of something famed Morgan Stanley strategist Gerard Minack said once:

“The funny thing is there is a disconnect between what investors are saying and what they are doing. No one thinks all the problems the global financial crisis revealed have been healed. But, when you have an equity rally as you’ve seen for the past four or five years, everybody has had to participate.

What you’ve had are fully invested bears.”

While the mainstream media continues to skew individual’s expectations by chastising them for “not beating the market,” which is impossible to do, our job is to participate in the markets with a bias toward capital preservation. As noted, the destruction of capital during market declines has the most significant impact on long-term portfolio performance.

From that view, as a portfolio manager, the idea of “fully invested bears” defines the reality of the markets we live with today. Despite the understanding that the markets are overly bullish, extended, and valued, we must stay invested or suffer potential “career risk” for underperformance.

Such is the consequence of the Federal Reserve’s ongoing interventions. Portfolio managers must chase performance despite concerns of potential capital loss. In other words, we are all “fully invested bears.” We are all quite aware this will eventually end badly. However, in the short-term, no one is willing to take the risk of being grossly underexposed to Central Bank interventions.

With this understanding, you can appreciate why we increased our equity exposure last week. Currently, we are at full equity allocations, with a slight increase in the duration of bonds. Such leaves our portfolios at model weights in cash with bond durations shorter than our benchmark.

Furthermore, we added an “index trading position.” Having a single index position in the portfolio allows us to increase exposure to markets as needed quickly and promptly reduce exposure if required.

Lastly, we continue to carry a “barbell approach” in our portfolios. Such splits holdings between “reflation” trades such as Energy, Financials, and Materials and “growth” focused on Technology.

Therefore, with the breakout to new highs, the markets will likely stretch towards our year-end target of 4100.

After this discussion, it seems apropos to remind you of Bob Farrell’s “10-Investment Rules:”

There is only one fact to remember:

“All bull markets last until they are over.” – Jim Dines