Despite releasing trial results from Pfizer on an almost daily basis this week, the federal government is still worried about public confidence in Biden’s vaccine effort (even after the president made a spectacle out of doubling his target for doses distributed during his first 100 days). And as skepticism about the efficacy of the JNJ jab, which only requires one dose instead of the two required for Moderna and Pfizer, persists, the Hill reports that the White House has enlisted the help of Democratic governors to “boost confidence” in the jab. 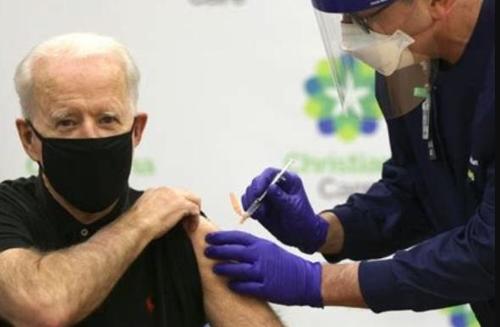 Several governors have purposely taken the JNJ jab in recent weeks to try and show the vaccine is safe at the behest of the White House. A few weeks ago, Biden held a call with top communications staff from a bevy of governors, including Tim Walz from Minnesota and JB Pritzker from Illinois.

Now, the government is once again in damage-control mode after reports that 15MM doses were ruined during a manufacturing snafu, the latest public issue related to the jab.

When approached by the Hill, the governors’ denied that they took their marching orders from the president.

Not every governor opted for the Johnson & Johnson shot because of the White House ask, but some said it influenced their choice”

“Governor Northam’s decision to get the Johnson & Johnson vaccine two weeks ago was intended to increase public confidence in that particular vaccine,” said Marissa Astor, a spokesperson for Northam. “He felt it was important to demonstrate that there are three safe and effective vaccines available, including Johnson & Johnson.”

A spokesperson for Walz stressed that the governor wants to assure Minnesotans that “the best vaccine is the one you’re offered.”

Walz’s decision to get the Johnson & Johnson shot was intentional, the spokesperson said, but it was made before White House officials specifically encouraged governors to get that vaccine.

Stitt, who got the vaccine this week, got the Johnson & Johnson shot because the state health department had it available, an official with his office said. Oklahoma is among the top 10 states for vaccines administered, the official noted, and Stitt wanted to publicly encourage residents to get their shot.

A White House official who spoke with the Hill “was adamant” that they were seeing “enthusiasm” for the JNJ jab (and presumably, vaccines generally), and that any outreach to governors was part of “a multipronged stragey to engage government, religious and cultural leaders”.

Dr. Anthony Fauci also helped out with the charm offensive. He appeared in a video posted by the White House last week in which he laid out the basis about the JNJ vaccine and assured the public it was safe and effective.

“I would definitely take the Johnson & Johnson vaccine,” Fauci said, noting it’s “virtually 100 percent protective” against hospitalization and death. “This is a vaccine that works, and it only requires one dose.”

Why would the administration be so concerned about the JNJ shot in particular? Well, so far, all the trial data released show it is significantly less effective than its rivals, raising concerns that those who receive it either won’t be fully protected, will need to get a “booster shot” (or two) later on, or both.