President Biden is feeling pressure from progressive Democrats to dramatically increase the size of the next economic stimulus – after they introduced a new measure that would invest $10 trillion over 10 years in renewable energy, green infrastructure, and climate justice initiatives. 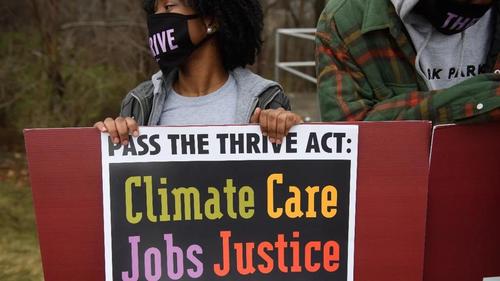 The proposed bill – known as the “Transform, Heal and Renew by Investing in a Vibrant Economy (THRIVE) Act, would make a series of sweeping changes to American infrastructure – and contains elements of the Green New Deal – including, as Fox Business notes, “establishing a goal of 100% zero-carbon electricity by 2035, zero emissions from new buildings by 2025 and expanding clean public transit options to most Americans by 2030.”

The THRIVE act also directs at least 40% of federal investments towards communities which have been “excluded, oppressed and harmed by racist unjust practices,” according to the report.

“We are facing a series of intersecting crises: climate change, a public health pandemic, racial injustice and economic inequality,” said co-sponsor Sen. Ed Markey (D-MA) at a Monday press conference. “We can’t defeat any of these crises alone. We must develop a roadmap for recovery that addresses them all.”

Biden’s $2.25 trillion infrastructure proposal on Wednesday – the first component of more than $3 trillion in proposals – just isn’t enough for progressives, despite the fact that it’s already going to be tough sledding to pass given the Democrats’ narrow margin in the Senate – and is receiving criticism from all sides. Meanwhile in the House, Speaker Nancy Pelosi can only afford to lose three Democratic votes if Republicans are unified in opposition.

“This might be the last opportunity we have to really do big things under reconciliation. We need to see more here, and I think that’s the universal thought across the movement right now,” said Yvette Simpson, the CEO of Democracy for America, a progressive advocacy group, referring to special budget rules that allow Democrats to pass bills through the Senate with simple-majority votes.

Senate Majority Leader Charles Schumer (D-N.Y.) is making the argument to the Senate parliamentarian that Democrats should be allowed to move two more packages under those special budgetary rules. -The Hill

“I want to see the details of how they’re planning to make sure that the climate issues and the child care issues don’t get left behind. We can’t have the train leave the station and critical parts are left on the platform,” said Warren, who tweeted on Wednesday that.

Rep. Alexandria Ocasio-Cortez (D-NY) said on Tuesday that Biden’s plan needs to be “way bigger,” tweeting “This is not nearly enough. The important context here is that it’s $2.25T spread out over 10 years. For context, the COVID package was $1.9T for this year *alone,* with some provision lasting 2 years.”

Another progressive lawmaker, Rep. Pramila Jayapal (D-WA) who heads the Congressional Progressive Caucus, said on Tuesday that the White House needs to go even bigger – and that Biden’s proposal is far smaller than what he promised last year on the campaign trail.

“The Biden infrastructure proposal on the campaign trail was significantly larger than what’s been discussed so far with Build Back Better,” she said during a call with reporters, citing a $6.5 trillion – $11 trillion previously estimated cost over 10 years. “So we really think that there’s ample room to get the overall number up to somewhere in that range in order to really tackle the scale of investment that we need to make,” she added.

Jayapal supports including tax hikes in the package but primarily as a way to bring more “fairness” to the tax code, rather than simply to offset the cost of infrastructure improvements.

“Democrats should not constrain ourselves or lower our ambitions because of manufactured concerns about the deficit,” she said.

Among progressive activists, there are growing questions about whether Biden’s infrastructure plan will do enough to tackle economic inequality in historically marginalized communities.

“There’s a lot more that needs to be addressed, especially when we think about how equity has been reflected in climate justice work,” said Joanne Pérodin, an activist with Florida Rising. “This is the time for us to get bolder.”

She said the White House and Congress needs to make sure investment will be equitably spread across “Black communities, brown communities, indigenous communities.” -The Hill

On Tuesday, Sen. Markey called the $10 trillion proposal a “historic opportunity,” adding “With a Democratic White House and Senate and House of Representatives we have a chance to lift the gaze of our country to the constellation of possibilities in job creation and to finally rectify the historic racial injustices so many people of color have faced in this country, all while solving the climate crisis at the same time.“

Nevermind who’s going to pay for it… eventually.