Looking at tomorrow’s main even, the March payrolls report, Wall Street analysts expect a sizable bounce from the February print of 379K to 650K (of which 645K are private), a number which was validated by yesterday’s 517K ADP private payrolls print. And while that number is likely priced in by now, the risk, as we discussed earlier this week, is that the payrolls print will be sharply to the upside with whisper estimates of a 1+ million report and with real-time indicators compiled by JPMorgan hinting at a print potentially as high as 1.83 million, which needless to say, would be a shock to a market already on edge over reflationary indicators. 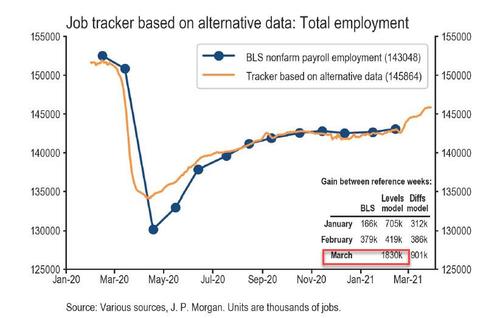 There is a catch: as tomorrow is Good Friday, stock markets will be closed, and so the only major asset class that will be able to respond to what could be a major outlier jobs report will be bonds (which close at noon). This is why we on Tuesday we proposed the following hypothetical:

“imagine what happens to the 10Y – and certainly the belly and the 5Y – if we do get a 1.8MM print (which has quickly emerged as the whisper number for Friday), smashing expectations by 3x, and unleashing a volley of TSY selling as the herd panics and dumps Treasurys faster than you can say a “failed 7Y auction.”

While this is a somewhat hyperbolic take, overnight JPM dug deeper into this hypothetical and as the bank’s rates strategist Jay Barry warned markets should expect extra treasury volatility should the jobs number emerge as a true surprise.

As Barry writes, “our work in the past has shown that Treasury yields are sensitive to payroll surprises and that these moves can be amplified when employment data are released on holiday-shortened trading sessions. Given that this Friday’s BLS release coincides with an early 12pm close in bond markets, we explore how Treasury markets have behaved following payroll releases in different types of trading sessions.“

JPM summarized the results in the following chart which shows that on previous Good Fridays and/or days with an early close in the bond market, the reaction to payrolls surprises is quite acute, especially in the 30, 60 and 120 minutes interval post the payrolls report. 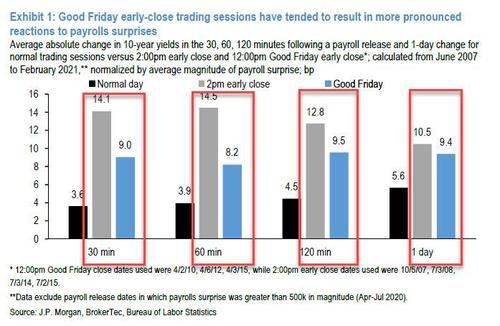 The chart above shows the average absolute change in 10-year yields over various periods around payrolls releases, normalized by the average size of payrolls surprise, during various types of trading sessions. The data show that in the hours following payrolls releases on Good Friday 12pm early-close sessions, Treasury markets appear to be approximately 2 times more volatile than observed during a normal session, for a given magnitude of surprise, and in 2pm early close sessions, they are roughly 3 times more volatile than that of a full session following releases.

Looking ahead, JPM concludes that “these results suggest that Treasury yields could exhibit greater volatility in response to a surprise in the employment report on Friday.”

To be sure, looking at how bonds are trading today, one wouldn’t conclude that the bond market is on a “knife edge” expecting some huge print. In fact, 10Y yields have declined steadily and were last trading at 1.68%, down sharply from the 14-month-high of 1.77% reached just two days ago. 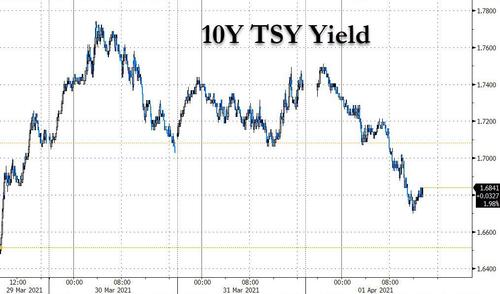 While it is possible that much of today’s action is a post quarter-end rally in Treasurys, the fact that reflation concerns appear to be easing may end up being the catalyst why bonds express an outsize surprise to an outlier jobs report, especially if it approaches the whisper number in the 1MM+ ballpark.

In any case with stocks closed and with liquidity in the bond market already woefully low (and set to drop further as HFTs pull their bids around the time post-payroll action is most acute), traders are best advised to prepare for fireworks at 8:30:01am tomorrow.

Finally, should we see an outsized reaction in Treasurys, the question is how high would 10Y yields jump: as a reminder, the latest BofA Fund Manager Survey found that most Wall Street professionals believe that the level in the 10Y that would be a “reckoning for stocks” is 2.00%. 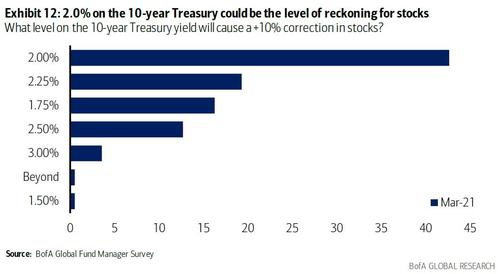 So should we get a kneejerk move higher in yields anywhere close to this, then the bond market fireworks on Friday could easily lead to an all out bloodbath for stocks on Monday.