What To Expect From Today’s OPEC+ Meeting: Another Saudi Surprise?

What To Expect From Today’s OPEC+ Meeting: Another Saudi Surprise?

After Wednesday’s JMMC meeting ended without reaching a recommendation (as is customary and expected), the key decision-making OPEC+ meeting – where ministers will hammer out May’s output quotas – begins at 1pm London Time. As Newsquawk notes, market expectations are skewed towards an extension of current cuts, but a clear stance from Saudi – who have a tendency to surprise in recent months – remains to be seen, namely on the decision regarding the extra 1MM barrels the Kingdom has kept offline since the start of the year.

Commenting on today’s key event, Bloomberg’s Jake Lloyd-Smith reminds us that Saudi Arabia has sprung some big surprises in the oil market already this year, and may do so again today as OPEC+ grapples with a thorny decision on supply. That could make for a volatile session before the long weekend, and already has with oil whipsawing from gains to losses in jittery trading, amid market rumors that OPEC+ is i) considering a return to phased monthly oil-output hikes and ii) is also considering maintaining current cuts, according to a delegate… which pretty much covers every base so is completely useless. 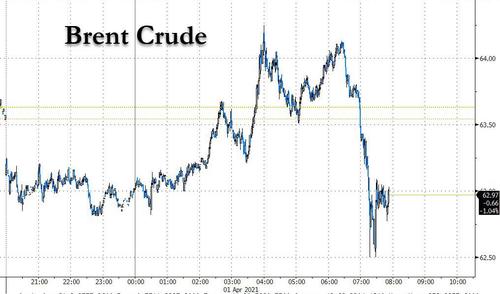 As such, while the consensus view is the grouping will stick with deep output curbs to safeguard crude’s recovery, there’s an outside chance of alternative outcomes. These span the twin extremes, from releasing barrels to tightening further.

At issue is the varied recovery across key regions. For every rosy demand metric from the U.S. or China, there’s a poor one from Europe as lockdowns make a comeback. In addition, Riyadh faces a headache from rival Iran, which has been pushing clandestine barrels into China despite U.S. sanctions. This year, Riyadh has cultivated a reputation for surprises, from a unilateral output cut in January to presiding over the OPEC+ decision in March to keep curbs when the market expected an easing. While today’s decision may follow the script for a rollover, traders will be on alert for different story lines.

A quick recap of notable highlights into the meeting, courtesy of Newsquawk:

Citi has called on OPEC+ to again extend the current cuts or even cut deeper to keep a floor under prices. Although, the latter would be easier said than done as OPEC+ unanimity is needed to roll out policy. Members are tempted to raise output amid the high-price environment, whilst some also recently voiced concern over market share loss to the US.

Goldman Sachs expects OPEC+ to keep production for May unchanged at the upcoming meeting. The bank views the recent fall in oil prices as overshooting the shifts in oil fundamentals. “In particular, we expect a slower ramp-up in OPEC+ production this spring to help offset both slower EM and EU demand recovery and higher Iranian exports, with global demand still set to increase sharply through the summer.”, the bank says.

ING has also aligned itself with market expectations; “The weakness in the physical and paper market since the OPEC+ meeting earlier in the month could push the group to roll over the current cuts when it meets next on 1 April.” The bank suggests that if we do see any easing in cuts, it is likely to be very modest, but OPEC+ would want to avoid a sell-off in prices.