Hooray! The Price Of Toilet Paper Is Going Up Again, Are You Cheering Too

Hooray! The Price Of Toilet Paper Is Going Up Again, Are You Cheering Too

The Fed is rooting for more inflation. It’s coming and the Fed is cheering. 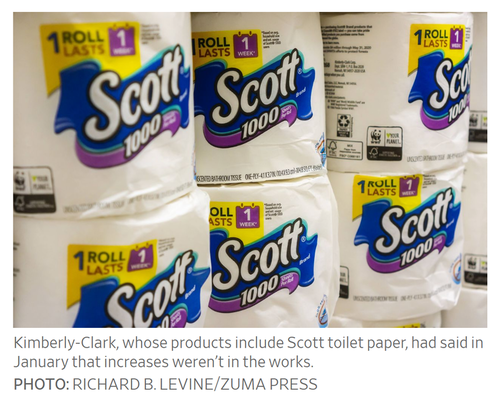 The Fed is undoubtedly pleased that Higher Commodity Costs are Now Passed on to Shoppers.

Makers of everything from diapers to cereal are starting to feel the strain of higher commodity prices, and some are passing the added cost along to consumers.

Kimberly-Clark said its increases, which will be implemented almost entirely through changes in list prices, are needed to help offset significant commodity cost inflation.

In addition to toilet paper, price hikes are slated for Huggies, Cheerios, peanut butter, and turkey.

No doubt, that’s just a start.

The Fed is very pleased that your dollar buys less than a month ago. Are you cheering  too?

Easy Money Quote of the Day: Fed “Won’t Take the Punch Bowl Away”

On March 25, I noted the Easy Money Quote of the Day: Fed “Won’t Take the Punch Bowl Away”

San Francisco Fed President Mary Daly won the gold medal for easy money statements.  She said the central bank would show at least “a healthy dose” of patience. ”We are not going to take this punch bowl away,” said Daly.

She wants higher inflation as do four other Fed presidents I cited.

Spotlight on the Fed

Fed Chair Jerome Powell wants to let inflation run hot to make for alleged lack of inflation in the past.

In short, he is unhappy to have failed at destroying the purchasing power of your dollar fast enough.

He would not recognize inflation if it jumped off the table and spit grapefruit juice in his eyes.

As discussed previously, Inflation is Poised to Soar, 3% by June is “Almost Certain”

For discussion, please see Historical Perspective on CPI Deflations: How Damaging are They?

Japan has tried what the Fed is doing now for over a decade, with no results.

Yet, Powell hell bent on producing more than 2% inflation until the strategy “works”.

It already has, using the word “works” rather loosely. 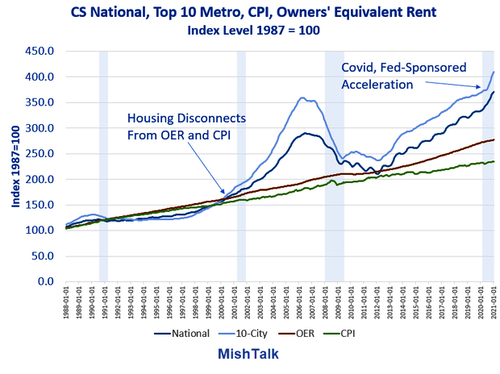 Inflation is Rampant and Obvious

Yesterday I commented Hello Fed, Inflation is Rampant and Obvious, Why Can’t You See It?

The national level average year-over-year increase in home prices is 11.2%.

Click on the above link for a series of 5 charts that explain what’s happening.

What Would I Do?

For the answer, please see Reader Question: What Would I do Differently Than the Fed?