Archegos And Euro Share More Than A Greek Echo

Archegos And Euro Share More Than A Greek Echo

Authored by Vassilis Karamanis, FX and rates strategist who writes for Bloomberg

Albert Einstein is widely credited as saying that insanity is doing the same thing over and over again and expecting a different result. The phrase keeps coming to my mind as I read story after story on the Archegos Capital Management saga and look at a series of charts on the euro. At first, the two might seem unrelated, but they both hold relevant lessons about market complacency.

The story reads as expected — or feared: The firm, little known outside finance circles, had amassed tens of billions of dollars in stocks bets, much of it using opaque derivatives and borrowed funds, including some giant bets on a small group of equities. And then it all went awry.

The acronym LTCM doesn’t mean much, it seems, to some market participants. Common sense either. Maybe Margin Call, J.C. Chandor’s 2011 movie, should be trending in streaming services, serving as a healthy reminder.

Those of us who still remember the spectacular collapse of the U.S. hedge fund Long-Term Capital Management in the late 1990s though are probably asking ourselves how this happened again.

Was it a regulatory issue, a market inherently at fault or just human nature? Will the story simply be forgotten again, especially given the few signs of lasting damage on markets? Or maybe we are all grown ups now and can move on quietly and in peace instead of obsessing over every set back. At least until the next tail risk comes knocking on our door, that is.

So what does the euro have to do with any of this?

It’s not that there is a secret correlation with stocks that unveiled itself amid the Archegos turmoil. But I’d argue that there’s a link. And it’s that some investors or managers are losing sight of reality and sustainable value-at-risk levels.

The common currency hit its lowest level in nearly five months today. Fair enough, right? The yield on 10-year U.S. notes reached its highest level since January 2020 Tuesday, and is now just a whisker away from halving its decline since 2018, so it makes sense for the dollar to keep applying pressure on euro bulls. 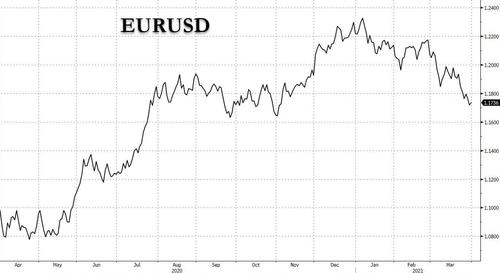 But positive data surprises are now coming out of the euro area, not the U.S. 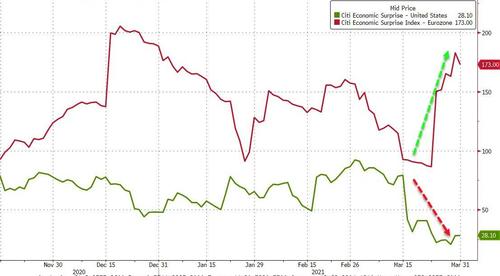 And higher inflation expectations in the bloc area haven’t been reflected in rate  differentials. The mess with the vaccine rollout has already been priced in, to a large extent at least. When long lasting correlations break down, it isn’t for ever.

The euro’s volatility skew is also flattening once again. Whether that’s enough for the common currency to visit $1.20 remains to be seen. Suddenly though, U.S. payrolls data are beginning to hold more weight given how much is now hanging on the U.S. vaccine campaign and the prospect of a roaring economy.