The mystery surrounding the bizarre and seemingly nonsensical tweet sent out Sunday evening by the verified Twitter account of US Strategic Command (STRATCOM) has been solved, apparently.

The below screenshotted tweet had been live for at least 30 minutes and was retweeted over 4,000 times, unleashing a fury of speculation and well as jokes. “Good to see USSTRATCOM is in qualified hands,” one commenter quipped. The universal sentiment however was one of serious concern given this is the military command that oversees America’s nuclear arsenal and deterrent… 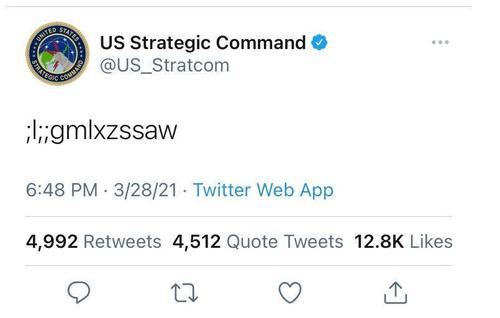 A quick follow-up post did little to dispel the mystery in an extremely rare moment of confused messaging and lack of professionalism from a military command center that literally is responsible for thousands of nuclear warheads.

It’s responsible for managing the US military’s strategic deterrence and overseeing communications to America’s civilian leadership as well as the public when it comes to severe threats against the homeland, thus its official communications are closely watched for any sign of changes in its official defense posture.

“Apologies for any confusion. Please disregard this post,” the message said before both were eventually deleted.

Is that… the launch code? https://t.co/Wpzaa4u4Mh

This is hilarious. So many people were having so much fun with @US_Stratcom’s mistaken tweet that they had to delete it. No worries. Here’s a screen shot.

You see their problem. Everyone makes mistakes. But not everyone has thousands of nuclear weapons. pic.twitter.com/1X6MpM5mX3

A statement from Strategic Command to a journalist who filed a Freedom of Information (FOIA) request said that a child gained access to the Twitter account.

“His very young child took advantage of the situation and started playing with the keys and, unfortunately, and unknowingly, posted the tweet,” Stratcom official Kendall Cooper said in a letter subsequently posted online.

Filed a FOIA request with U.S. Strategic Command to see if I could learn anything about their gibberish tweet yesterday.

Turns out their Twitter manager left his computer unattended, resulting in his “very young child” commandeering the keyboard. pic.twitter.com/KR07PCyCUM

So it appears the Nebraska-headquartered Stratcom is now essentially chalking it up to a ‘remote work mishap’ – after widespread speculation of a significant hack or breach of Stratcom’s highly secure systems.

Likely few will be comforted by how easy it was – given that literally a child accessed the account. Or as Stratcom put it in its somewhat awkwardly worded official explanation – the administrator’s “very young child took advantage of the situation…”