Progressives have their eyes on on your wallet to pay for their big government schemes. And it looks like Biden will oblige them. 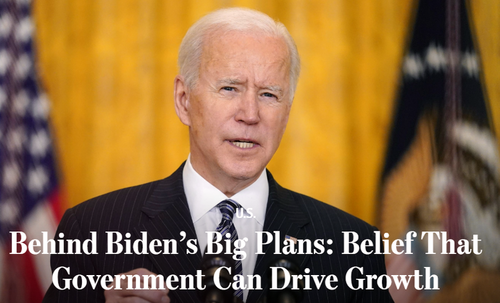 $10 Trillion for Climate and Infrastructure

On Monday, Sen. Edward J. Markey (D-Mass.) and Rep. Debbie Dingell (D-Mich.) unveiled a climate and infrastructure plan that called for $10 trillion in spending over the next decade. Biden’s initial campaign pledge to invest $2 trillion over four years was already inadequate to confronting climate change, and his coming proposal may be even less so, said Robert Pollin, an economist at the University of Massachusetts Amherst, who helped craft the Markey-Dingell plan. Pollin said a $3 trillion investment only amounted to about 1.3 percent of America’s gross domestic product.

To put the $10 trillion Markey and Dingell are proposing in perspective, over the next decade, the Congressional Budget Office expects that we’ll spend $1.4 trillion on veterans’ programs, $6 trillion on Medicaid, $8.5 trillion on defense, and $8 trillion on all other non-defense discretionary spending. The Markey-Dingell bill would be higher than any of these parts of the budget, only it would come on top of all of these existing expenditures.

The Biden economic team’s ambitions go beyond size to scope. The centerpiece of their program—a multitrillion-dollar proposal to be rolled out starting Wednesday, less than a month after a $1.9 trillion stimulus—seeks to give Washington a new commercial role in matters ranging from charging stations for electric vehicles to child care, and more responsibility for underwriting education, incomes and higher-paying jobs.

The administration has also laid the groundwork for regulations aimed at empowering labor unions, restricting big businesses from dominating their markets and prodding banks to lend more to minorities and less for fossil-fuel projects. All while federal debt is currently at a level not seen since World War II.

It all marks a major turning point for economic policy. The gamble underlying the agenda is a belief that government can be a primary driver for growth. It’s an attempt to recalibrate assumptions that have shaped economic policy of both parties since the 1980s: that the public sector is inherently less efficient than the private, and bureaucrats should generally defer to markets.

The administration’s sweeping plans reflect a calculation that “the risk of doing too little outweighs the risk of doing too much,” said White House National Economic Council Director Brian Deese. “We’re going to be unapologetic about that,” he said. “Government must be a powerful force for good in the lives of Americans.”

If you think this is crazy, you are thinking correctly.

If you don’t think this is crazy, you are crazy.

The notion that government can spend money wisely and allocate resources wisely has been disproved countless times.

Take a look at Soviet 5-year plans, Venezuela, Japan for the last three decades, or dozens of other examples.

A Word About Capitalism

We don’t have failure, we have bank bailouts, student loan bailouts, housing bailouts, and so many moral hazard market interventions by the Fed and Congress I cannot even name all the facilities or tools.

And without failure, you don’t have capitalism. So don’t tell me that we need big government because capitalism doesn’t work.

Regardless, more big government ideas are about to be tested.