The giant Ever Given container ship was dislodged from the Suez Canal bank on Monday, and traffic has since resumed, with more than 400 ships waiting to transit the world’s most vital shipping lane. The blockage, one of the longest in half a century, is just the beginning of problems as it could take upwards of ten days to normalize canal traffic. With the Suez crisis abating, it’s now time to tally up the damages.

“The legal issues are so enormous,” Alexis Cahalan, a partner at Norton White in Sydney, which specializes in transport law, told Bloomberg.

“If you can imagine the variety of cargoes that are there — everything from oil, grain, consumer goods like refrigerators to perishable goods — that is where the enormity of the claims may not be known for a time.”

According to Fitch Ratings, the blockage is expected to dent global reinsurers’ earnings, already crushed by the virus pandemic disrupting global supply chains, winter storms in the US, and flooding in Australia. After the Suez crisis, marine reinsurance is expected to rise.

According to Inchcape Shipping Services, a maritime services provider, 421 vessels are waiting to transit the canal. The canal handles approximately 50 ships per day and could take 8-10 days to normalize. 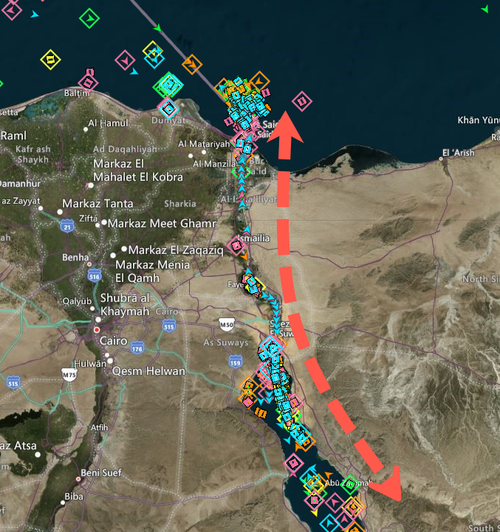 Suez Canal Authority Chairman Osama Rabie told reporters that it could take more than four days for traffic to return to normal during a presser conference. It was initially noted that it might take about a week.

“It’s going to take them five or six days to clear up all the backlog of traffic,” Rustin Edwards, the head of fuel-oil procurement at shipping firm Euronav NV, said on a conference call on Tuesday. “You’re going to start seeing congestion at delivery ports when the ships that diverted and the ships that went through start arriving at the same destinations. It’s going to cause a bit of a headache for a lot of container companies for the next couple of weeks.”

As of 1020 ET Tuesday, Ever Given is moored in Greater Bitter Lake, awaiting an inspection of its hull after the grounding incident. 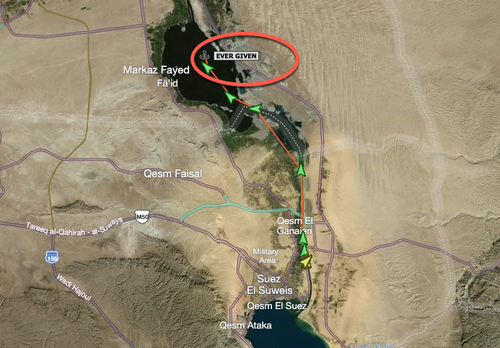 Still, there’s a massive parking lot of vessels waiting to enter the south and north part of the canal.

D-Day invasion fleet or ships waiting for the Suez Canal to open? pic.twitter.com/OGQUojBxDN

Bloomberg explains the mounting legal action for owners of goods on board Ever Given:

In a potential merry-go-round of legal action, owners of the goods on board the Ever Given and other ships could seek compensation for delays from their insurers. Those insurers for the cargo can in turn file claims against Ever Given’s owners, who will then look to their insurers for protection.

Evergreen says Japan’s Shoei Kisen Kaisha Ltd. — the ship’s owner — is responsible for any losses. Shoei Kisen has taken some responsibility but says charterers need to deal with the cargo owners.

Evergreen’s legal adviser is Ince Gordon Dadds LLP, according to people familiar with the matter, who asked not to be identified because they aren’t authorized to speak to the media. London-based Ince Gordon Dadds and Evergreen declined to comment.

An official at Shoei Kisen said the company hasn’t received any compensation claim yet. The firm is still examining what it is responsible for. The ship’s hull is insured through three Japanese companies.

… and legal action for the grounding of Ever Given has yet to be determined as an investigation is still ongoing. So far, Rabie said the authority isn’t at fault and that the ship’s captain is one to blame.