Russian state sources are alleging that Washington under the Biden administration is ramping up military aid to Ukraine after local media observed a US cargo ship delivering 350 tonnes of military equipment – including tactical vehicles – to Ukraine’s Odessa port.

Local media reported the delivery which began late Wednesday and which is said to still be in process Friday. Ukraine’s Dumskaya news agency said the American vessel carried at least 35 US military humvees for Ukrainian national forces.

“The bulk carrier Ocean Glory specializes in military transportation. Built in 2015, length 171 meters, width 25 meters, deadweight about 20 thousand tons,” it added according to a translation.

The delivery follows last year’s US DoD announcement of an additional $125 million military assistance package for Ukraine (unveiled in March) which involves equipment, training, and military advisory support, with an additional $150 million waiting for Congressional and Pentagon approval.

Recall that a little over a month after Biden taking office, the White House issued an official communique commemorating “Russia’s illegal invasions of Ukraine” – as the statement put it.

“The United States continues to stand with Ukraine and its allies and partners today, as it has from the beginning of this conflict. On this somber anniversary, we reaffirm a simple truth: Crimea is Ukraine,” the Biden administration said on Feb.26.

“The United States does not and will never recognize Russia’s purported annexation of the peninsula, and we will stand with Ukraine against Russia’s aggressive acts.” 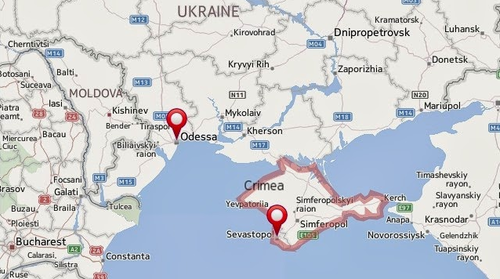 Needless to say the Kremlin has been monitoring US equipment deliveries through Odessa port very closely as concerns grow over Biden’s Russia and China-centric foreign policy, which has seen additional pressure ramping up fast on both countries, including fresh sanctions against Kremlin officials of late and vows of impending cyber-attacks in retaliation for alleged US election ‘interference’.