Mysterious $111 Billion Payment Gap Is “Talk Of The Town”

Mysterious $111 Billion Payment Gap Is “Talk Of The Town”

A bizarre disconnect between yuan settlement data and the PBOC’s balance sheet has generated much interest among economists and market participants, according to Bloomberg’s Ye Xie who notes that until recently, when China Inc. posted a trade surplus, corporates sold the dollar proceeds to commercial banks. The PBOC then bought the dollars from banks and sold yuan to them, as part of its intervention to slow the yuan’s appreciation.

As a result, there used to be a tight relationship between the net yuan settlement – corporates selling dollars to banks – and changes in foreign-currency funds outstanding at the PBOC, a proxy for its intervention activities.

However, as the chart below shows, the relationship started to fray some time in 2017 and the decoupling has become quite grotesque in recent months. As we first discussed yesterday, the latest settlement data released over the weekend showed Chinese banks bought a net 691 billion yuan ($107 billion) of foreign currency from clients in December and January, the most on record (since 2014). The surge suggest – to Xie – that exporters rushed to convert their dollar revenues to yuan ahead of the New Year Holiday and to take advantage of a stronger exchange rate. 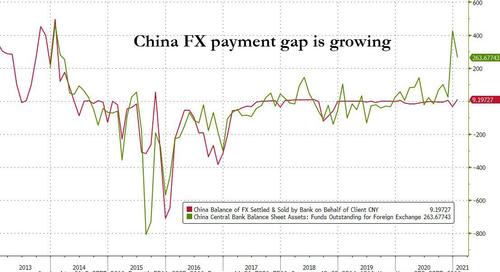 However, as the red line above shows, the PBOC’s FX funds outstanding barely changed, something we highlighted yesterday, and in fact, they declined by 24 billion yuan ($4 billion) during the two-month period. Combined, this $111 billion payment gap has become the “talk of the town” according to Xie.

While it is not entirely clear what’s going on, there are at least two conclusions we can draw according to the Bloomberg macro strategist:

What does this all mean, Xie asks? Well, as we touched on earlier this week, if dollars keep coming in – and they are doing just that at a record pace… 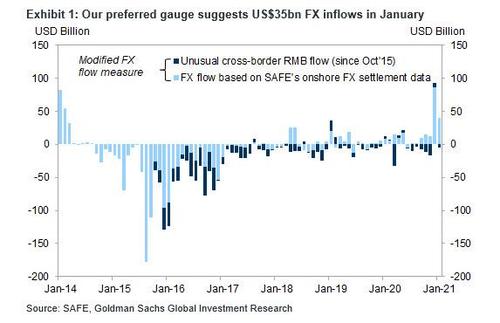 … demand for the yuan will become so high that – without the PBOC adding money supply – liquidity will tighten. Therefore, the PBOC has to accumulate foreign reserves again to add money supply, as it used to do. Others say it’s difficult to return to the old policy when the exchange rate is under scrunity from the U.S.

It may also explain why, as the SCMP reported last week, China is mulling cracking open its monetary firewall, and “allowing investment in overseas stocks, insurance” and maybe even housing (and while we are at it, why not bitcoin?)

Chinese individuals cannot directly invest in overseas stocks and bonds unless they are through banks or qualified institutional investors. Citizens are also banned from exchanging the yuan to buy property overseas.

Guan Tao, a former division director at SAFE, said Beijing had flagged the idea now because the yuan has been appreciating and foreign exchange supply has exceeded demand, meaning the country’s trade surplus had grown but there were few channels for capital outflows.

“There is not an effective hedging mechanism, and there are three ways to deal with the current situation: increase the exchange rate flexibility, control capital inflows to some extent, and expand capital outflows in an orderly manner,” said Guan, who is now chief economist at BOC International.

It would be remarkable if, as a result of the record recent inflows of dollars which may be behind this “mystery” $111 billion payment gap, Beijing would be forced to liberalize its currency. This is how Rabobank’s Michael Every explained the challenge facing China (a loose recap of the impossible trinity, also known as the trilemma, according to which it is impossible to have all three of the following at the same time: i) a fixed foreign exchange rate, ii) absence of capital controls and iii) an independent monetary policy_.

… As in the 1930s, no country wants to see a stronger currency and become a larger net importer of goods (and exporter of jobs). That includes China. To avoid excess FX appreciation on the back of its huge trade surpluses and the rising capital inflows from global markets happily shrugging off any Biden appeals to trans-Atlantic values, Beijing may not only allow easy access to the promised USD50,000 in per capita annual FX outflows, but permit this for buying foreign financial assets or property! Let’s see if this is actually delivered, but if it is, more levitation for all assets outside China seems assured. Ta-dah! Let’s just try not to think of the risks involved from the asset-liability imbalances as foreign capital flows into China, and those FX flow back out again rather than boosting its FX reserves – especially if that FX flows into US assets, helping to push up US real yields even faster

Others, such as Larry Hu, head of China economics at Macquarie Group, agree that a gradual restart of FX outflows may be in the cards: “what is clear is that policy makers will likely open up more channels for outflows to ease the appreciation pressure” and while it remains to be seen if the hard retail cap of $50,000/year is expanded, already the QDII quota – which allows domestic institutions to invest abroad – has been increased again. Certainly relaxing limits on individuals’ overseas investment could be the next step. 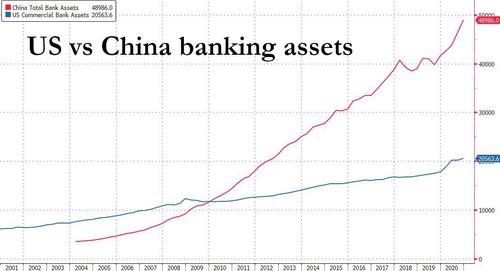 … end up buying US stocks (sending real rates even higher), US real estate or just bitcoin, the consequences for global capital flows will be massive.