For the more than 500,000 Instacart gig workers fulfilling grocery orders at supermarket chains such as Giant, Food Lion, Costco, among others, the delivery service is exploring ways it can eliminate human workers by employing robots at warehouses, according to a new report via Financial Times.

Anyone who straps on a mask, or now maybe two or three, and has shopped at a major grocery chain this year have noticed, many of whom, young millennials, running around the stores in green Instacart shirts, fulfilling orders. 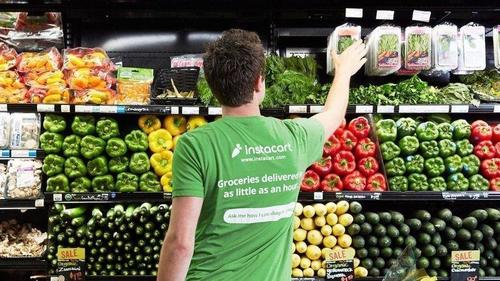 While this innovative delivery service has been nothing but stellar during the virus pandemic, the San Francisco-based startup has been researching ways to automate the picking process.

“Last spring, Instacart sent out proposal requests to at least five companies that offer robotic systems that would pick goods from purpose-built “dark” warehouses instead of store shelves,” FT said.

Sources said, “Instacart had initially expressed a desire to open as many as 50 robot-driven warehouses across the US in about a year.”

No deal has been struck with robotics makers to fulfill Instacart’s automation plans. This comes as Walmart and Amazon are entrenched in an e-commerce delivery war where networks of robotic micro-fulfillment centers are being developed around the country.

The source said there’d been a lack of interest from grocery store players who have caught wind of Instacart’s plans.

Instacart told FT that human workers would “continue to play an important role” at the company.

“While we have no updates to share today, we’re constantly evaluating our services in deep partnership with the nearly 600 retailers we work with. Instacart’s entire product and model is predicated on being a chief ally to our retail partners.”

We’re committed to supporting our brick-and-mortar partners and continuing to invest in and explore new tools and technologies that support the needs of their customers and further enable their businesses to grow and scale over the long term.”

What’s troubling is that more than half a million people work for Instacart. If a future rollout of Instacart automation is seen, this will undoubtedly result in higher technological unemployment.

Our advice to readers – if you’re in a low-skilled job that will be heavily impacted by artificial intelligence and automation – now is the time to retain for another job.