As Bloomberg’s Elena Popina writes this morning, Hedge funds were among the biggest fans of small-cap companies since late spring, putting money into the group with the consistency other corners of the market could only envy. However, it now appears that “their confidence is starting to wane.”

According to CFTC data, between May and last month, hedge funds bet on gains in the Russell 2000 Index every week but one, a persistence unmatched in their S&P 500 or tech megacap bets. But that bullish sentiment started to shift this month, when hedge funds first turned short on small caps, then widened their bearish bets a week later. As of Friday, their net short exposure, at 9,000 contracts, is the largest in eight months. 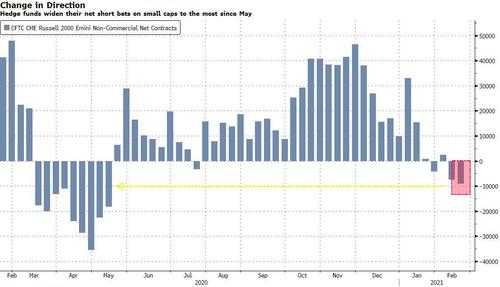 As Popina cautions, “whether these negative wagers are here to stay is anyone’s guess, but it does show that hedge funds’ affection toward small caps, intact for most of last year, is starting to wane.” It’s happening at a time when small companies are expected to be the biggest winners from rising inflation, a weaker dollar and better economic growth.

Meanwhile, what hedge funds are actually doing once again contrasts to what they say they are doing. Investor surveys from the likes of Bank of America showed small caps are among the top picks for this year, and the group’s 15% rally so far this year shows the wager has been prescient. 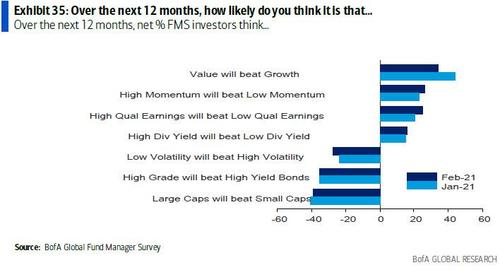 According to last week’s BofA FMS, close to a record 31% of investors continue to think small caps will outperform large caps in the next 12 months…. yet ironically they are now taking the opposite bets at least in futures. 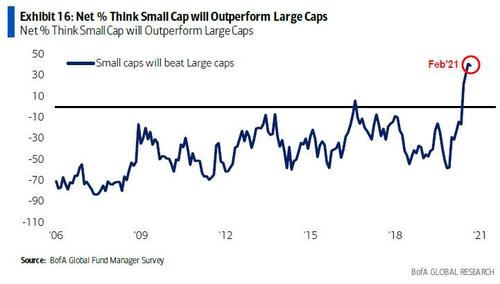 One likely reason for the shift in sentiment: implied volatility in the group remains above 30, the level it’s been at since a market sell-off in October. In the options market, uncertainty about the rally is still high, with the volume of put options outpacing calls by more than three times.

In any case, after some struggles last week when the Russell drifted lower from recent all time highs, the Russell is unchanged on Monday after some initial weakness. 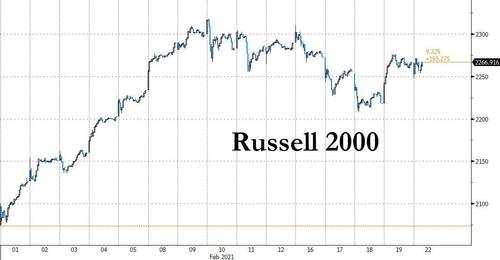