Another Day, Another Record High For Crypto: What Happens Next?

Another Day, Another Record High For Crypto: What Happens Next?

Another weekend, another record high across various cryptocurrencies. 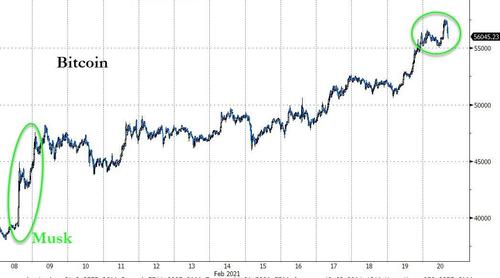 Additionally, altcoins have also been soaring, with Ethereum breaking above $2000… 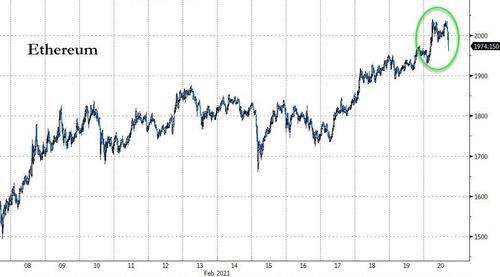 Anthony Scaramucci, founder of SkyBridge Capital, and newfound investor in cryptos, predicted that bitcoin would hit $100,000 by year-end, but suggested that investors be cautious about buying digital assets. The SkyBridge Bitcoin Fund LP has about $500 million in bitcoins, Scaramucci said.

“I do think we see $100,000 in this coin before year-end,” Scaramucci said. “It’s just a supply and demand situation,” he told the business network’s “Squawk Box,” referring to the perceived increased demand for bitcoins from institutions and waning supplies of the asset.

Additionally, “Crypto is being institutionalized at an accelerating rate,” Novogratz said in an interview.

“And now an ETF product is showing up in Canada first, it will show up in the U.S. next. It’s all part of this accelerating evolution of being a store of value.” 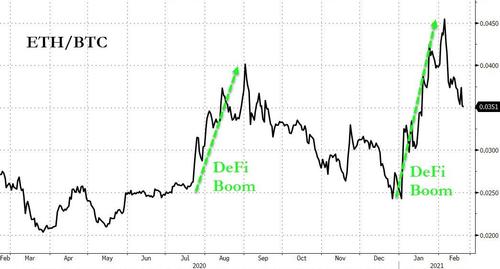 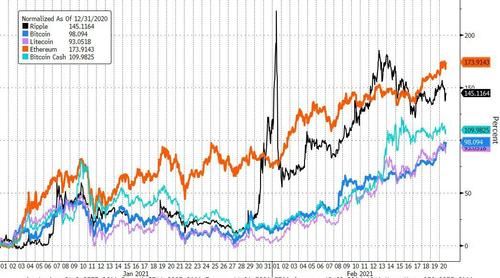 Decrypt notes the reasons are likely manifold and various:

One obvious candidate is US business intelligence firm MicroStrategy, which yesterday announced that it will sell off $1 billion of debt to buy more Bitcoin. MicroStrategy has done this before: it sold $400 million in convertible senior notes in December, which it added to a pool of money used to buy billions of the coin.

MicroStrategy is headed by CEO Michael Saylor—the crypto critic-turned-evangelist. Industry leaders who spoke to Decrypt credited him for his influence on Tesla’s buy of $1.5 billion worth of Bitcoin, which has since contributed to the price surge.

The new all-time high comes as the crypto benefits from a recent wave of “mainstreaming“.

Last week, BNY Mellon announced that it will invest in crypto for its clients. Industry leaders told Decrypt last week said that the move will change how asset managers view Bitcoin, pushing its price even higher in line with the long-term price predictions by JPMorgan, Guggenheim and others.

Guggenheim CIO Scott Minerd said that Bitcoin’s long-term price could reach $600,000 and JPMorgan predicted that it could reach $146,000.

And while $57,000 may sound like a lot, but the record high price which Bitcoin just hit may be just a little over 1% where it eventually trades according to Global Equities Research analyst Trip Chowdhry, who said in a note to clients said he thinks the digital coin will rise to $4 million in the next 18-24 months.

Putting that move in context: at a $4 million price, bitcoin – which today surpassed a $1 trillion market cap for the first time ever.. 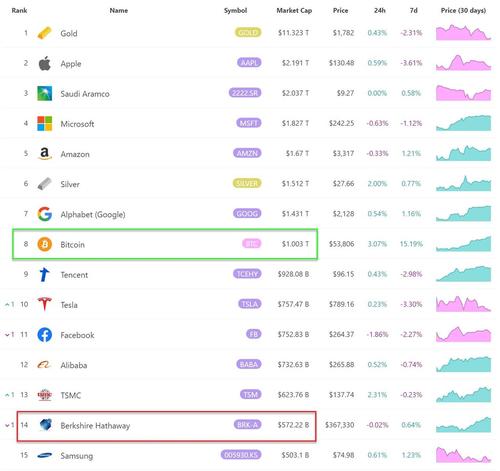 …would have a valuation of over $80 trillion, which while 8x bigger than the value of all above ground gold would still be a fraction of all financial assets in circulation.

“We are of the opinion that Bitcoin will get to $4 million per Bitcoin, in the next 18-24 months,” Trip wrote.

Chowdhry’s bull thesis is a carbon copy of what we said in January when we wrote “How Bitcoin Hits $100,000 Next: Morgan Stanley Boosts Stake In Microstrategy, Opening The Floodgates” in which we said that institutional adoption will be the next big catalyst.

Sure enough, Chowdhry writes that so far only three of the Fortune Global 2000 companies have Bitcoin on their balance sheets: Microstrategy, Tesla and Twitter – and they have pushed Bitcoin above $50,000. The remaining companies still have to put Bitcoin on their balance sheet, and this – he believes – will cause the price to surge to $4 million.

Another factor that could send Bitcoin higher is every Mutual Fund would need to own Bitcoins. He also noted that many graphics cards that are also being used for mining Bitcoin are out of stock and silicon foundries such as TSMC are running at full capacity and cannot make chip deliveries for automakers.

Meanwhile, regulators may stand on the sidelines since Bitcoin owners and related entities are major donors to the administration.

Chowdhry’s price target is far more optimistic than JPMorgan, which released a note to clients putting a “theoretical” long term price target on bitcoin of $146,000 as bitcoin begins to compete with gold. “Bitcoin is competing with traditional gold, bitcoin is a form of digital gold,” said Nikolaos Panigirtzoglou.

He said that the value of gold held by the private sector, solely for the purpose of investment, is around $2.7 trillion. For bitcoin’s market cap to reach that, it would need to hit a price of around $146,000.

But there are caveats, the biggest one being the volatility in bitcoin’s price. The digital coin is known for wild swings in price. Panigirtzoglou said bitcoin is “five times more volatility than gold.”

We still expect the next major upside catalyst to be Ray Dalio announcing that Bridgewater has bought $1+ billion in bitcoin for clients of the world’s biggest hedge fund. 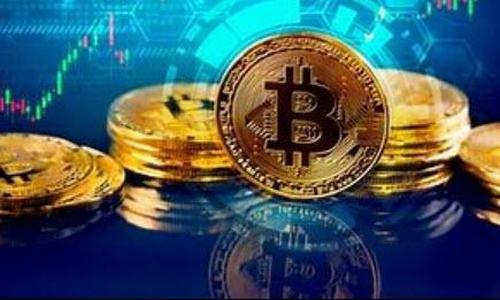 However, not everyone is as bullish as Chowdhry. Bruce Wilds, via Advancing Time blog, warns that Bitcoin’s future is far from certain…

Because of the success of Bitcoin and its soaring value, cryptocurrencies are back in the news. These “digital assets” are designed to work as a medium of exchange using cryptography to secure the transactions and to control the creation of additional units of the currency. To those of us in many areas of the world simply toiling along and concerned about getting through the day these currencies seem a bit abstract. Still, these currencies have a solid fan base.

With the recent news that Tesla had purchased $1.5 billion in bitcoin, many of those people that follow Elon Musk have made their first foray into crypto. These new investors come in on the heels of a slew of speculators flush with cash from checks flowing from the government that have already jumped into this market causing it to soar. The question in the minds of serious investors is whether this is a safe place to put your wealth. The main driver of what could be described as a “mania” is the “fear of missing out,” and it runs rampant in this market.

With wild predictions of Bitcoin surging to six figures or more, many people claim cryptocurrencies are like gold. Many people view it as a way to shelter themselves from the falling value of paper currencies and the dollar in particular. Since the dollar is the reserve currency of the world many Americans that fail to see its major competitors such as the euro and yen are even worse places to store wealth have magnified the possibility of a dollar collapse.

A big risk to investors in Bitcoin is that it could be made “Illegal” or the trading of it banned. If this happened in many countries it would drastically damage its appeal. This could be done under the claim that it protects investors from themselves or because it was not sanctioned by those in charge. The greatest reason for this is that it would protect the power of Central banks across the globe and their fiat currencies. It is rather silly to think those in control of fiat currencies would surrender their power over the financial system and go gently into the night.

On that front, Bloomberg reports that ECB President Christine Lagarde has taken aim at Bitcoin’s role in facilitating criminal activity, saying “For those who had assumed that it might turn into a currency — terribly sorry, but this is an asset and it’s a highly speculative asset which has conducted some funny business and some interesting and totally reprehensible money-laundering activity,” Her statement comes as German police took down what they believe was the world’s largest illegal “Darknet” marketplace. They shuttered a platform that about half a million people used to trade drugs and cryptocurrencies including Bitcoin. This shines focus on the fact Central banks, including the ECB, are increasingly focused on developing their own digital currencies as an official alternative to cash for the digital age. 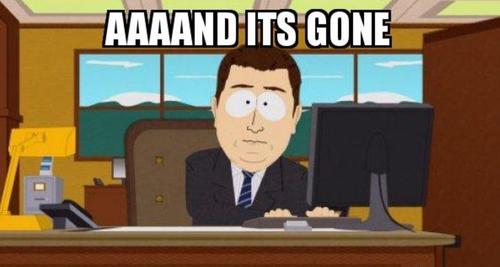 My biggest problem with bitcoin remains the old, “And Its Gone” issue. This means the possibility that it could vanish in the blink of an eye. While this can be said of almost any investment, it is particularly true of an intangible asset. Making matters worse, a major problem with an investment like Bitcoin is that when the wheels come off it could happen so quickly that there is almost no time to react.

Years ago, Jamie Dimon, CEO of JPMorgan Chase proclaimed bitcoin as a fraud, he went on further saying, “any trader trading bitcoin would be fired for being stupid.” Last month, during a meeting held for thousands of JPMorgan Chase traders and sales personnel around the world, the question was increasingly being asked by the bank’s employees: When will they get involved in bitcoin? It should be noted that JPMorgan has tried several times in the last few weeks to inject its views and halt bitcoin’s advance without success.

JPMorgan is not the only big bank being forced to face up to the new reality of decentralized finance and cryptocurrencies. Recently, Goldman Sachs hosted a private virtual forum with the CEO-founder of crypto firm Galaxy Digital. During the event, he expounded on his thesis for bitcoin, ethereum, and other digital assets as well as their macroeconomic backdrop. The point being, as corporations, payment systems, and disruptors such as Tesla, MicroStrategy, and PayPal, increasingly adopt and accept cryptos, other institutions must adjust.

While many people feel that the decision of large banks and institutions to recognize Bitcoin constitutes a major stamp of legitimacy for the nascent asset class. The interpretation that this idealistic technology meant to cut banks and other intermediaries out of “the loop” and limit their ability to store wealth may only appear to have gone mainstream. It is important to remember, this vessel of value used mostly by rich people so that they can remain rich may have forced groups to accept it but that does not mean they will invest in it.

To clarify, if someone sells you their home for a handful of diamonds, they may be doing so only because they know the diamonds can rapidly be offloaded in an active market.  This means that just because a bank will now store Bitcoin on behalf of its asset-management clients, that does not guarantee Bitcoin’s value or force the bank to embrace this asset class. Simply put they are trying to accommodate clients and give the impression they are staying up with current trends. Adding to their incentive is the allure that most of the services they offer will carry a fee.

Another thing we hear about is mining Bitcoin. This process uses a lot of energy and is becoming increasingly difficult to do. Several YouTube videos on this subject confirm it is difficult to make money doing this. It is a bit ironic that so-called “‘woke” companies and sociably  responsible people that claim to care about climate change would turn around and buy digital tokens that use more electricity to maintain than some countries. Well, that is all I have to say about that for now. 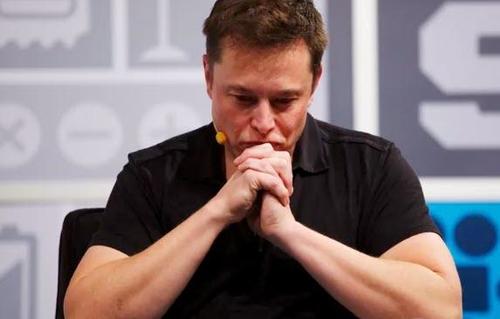 And finally, Elon Musk has tweeted this morning – in a rather interesting discussion with gold-enthusiast and crypto-skeptic Peter Schiff – that Bitcoin prices “seem high”:

Which briefly sparked a drop in the crypto: 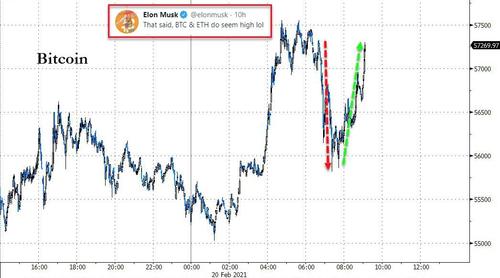 Remember what happened when Musk said TSLA stock was “too high” in May 2020? 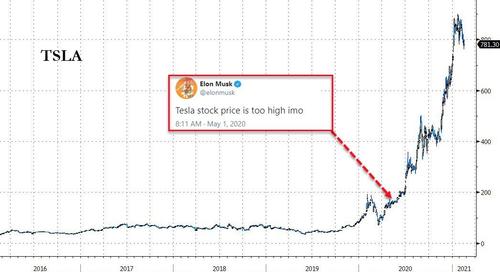