… real yields finally surged, and nowhere was this more visible than 30Y real rates (i.e., TIPS), which just rose above 0%… 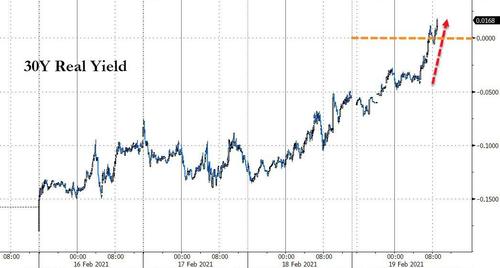 … for the first time since June as 10Y real yields are suddenly exploding higher as breakevens slump. 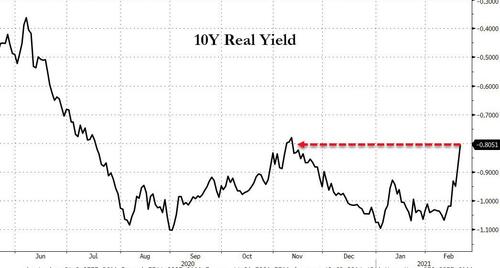 And now that Real Rates have joined Breakevens (which have moved sharply higher on the spike in commodity prices and especially oil) in surging fast, concerns about a real (no pun intended) VaR shock are also rising.

As a reminder, and as we discussed recently, when it comes to VaR shocks – destabilizing, multiple-sigma events which lead to forced deleveraging among institutional investors who are forced to puke their “safe” assets – even more important than how high rates rise is how fast they do so. Which is why a recent Goldman note “If Real Yields Rise More Quickly” is suddenly very appropriate. This is what Goldman said:

Real yields near all-time lows, but risks in focus. Investors have become more focused on the potential for and risks of higher US real rates after the shift to unified Democratic control. Our forecasts are for modest increases in 10-year real yields through 2021, but it is worth considering the impact of a faster move.

Looking back and looking forward at potential drivers and impacts of rapidly rising real yields. We examine three episodes of rapid increases in real rates over the last 15 years and look at what drove asset performance over those periods. Then, we illustrate the estimated sensitivity of key assets to shifts in both real rates and the growth outlook and predict asset responses to scenarios under which real rates might rise sharply.

For markets, it matters whether higher real rates are “growth” or “policy” driven. Asset market responses to higher real rates depend significantly on the source of the rates move. If improving growth expectations remain firm, the impact on US equities and credit is likely to be limited, even if the market experiences temporary anxiety. Shifts in real rates driven by expectations of more hawkish monetary policy are apt to be more damaging.

Broader market backdrop matters for asset responses too. The 2013 taper tantrum coincided with a sustained downshift in  Chinese growth. The sharp pressure on EM assets and commodity currencies over that period owes as much to that dynamic as to the impact of higher US real rates. By contrast, when real rates rose sharply in 2015 and especially in late 2016, markets were upgrading their views of China-linked assets.

Sensitivities to growth and real rates have shifted post-corona crisis. The response of US equity sectors and indices to growth and real rate shifts has been different in the coronacrisis than in the period before. While banks have remained consistent outperformers, the underperformance of tech-related stocks and other “high-duration” stocks during periods of sharply rising growth and real rate expectations is a recent phenomenon. While some of this shift may stem from the rotations specific to the post-corona reopening process, we expect the vulnerability of the Nasdaq/tech complex to higher real rates to persist for now.

Protection against large real rate increases available in rates and beyond. The simplest protection against higher rates comes in Treasury markets themselves, but tilting portfolios towards less rate-sensitive areas may also help. Both past episodes and our scenario analysis suggest that gold and $/JPY may also offer good optionality for scenarios in which real rates rise more quickly.

For the visual learners, this exhibit below shows asset patterns over the three core episodes of rapid real rate increases, illustrating that the growth, policy, and market backdrops matter. 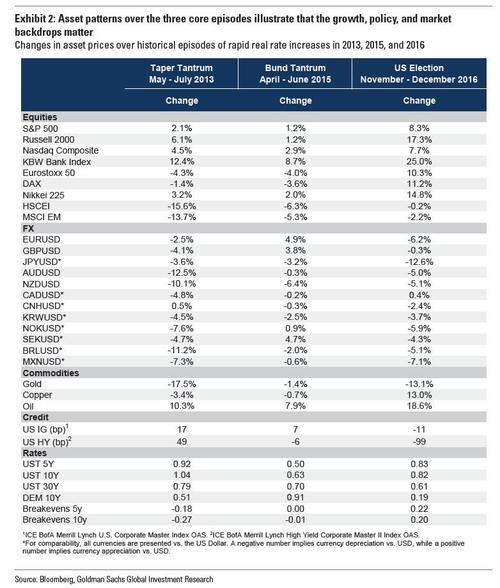 Looking at just the infamous 2013 blow out in real rates, the three sub-periods of the taper tantrum are again instructive. 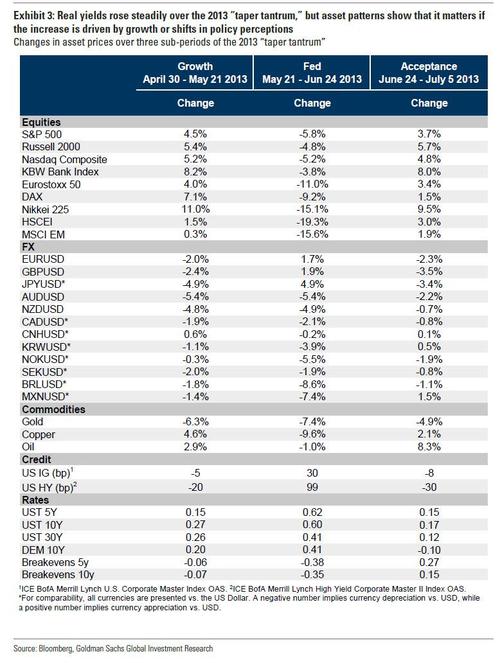 The above observations allowed Goldman to use these sensitivities to construct predictions for moves in key assets under various scenarios in which real rates might rise. These provide an alternative set of templates to the three historical episodes. The bank compares the predicted shifts to implied volatility in options markets to get a sense of where those moves are larger relative to current options pricing. For all scenarios, Goldman assumes an increase in 10-year US real yields of 70bp. This is a much larger shift than in the bank’s central forecasts but similar to the experience of the 2015 and 2016 episodes.

4. China slowdown. Finally, Goldman considers a case where China growth expectations fall alongside a real rate increase. The forecasts do not envisage this kind of slowing in China growth, but it is useful to illustrate how that mix of risks would impact asset returns, as it did in 2013. We are more likely to see periods of sequential slowing in Chinese growth than in other major economies, which may lead the market to worry about this kind of risk.

The predicted outcomes largely reinforce the lessons from historical episodes. 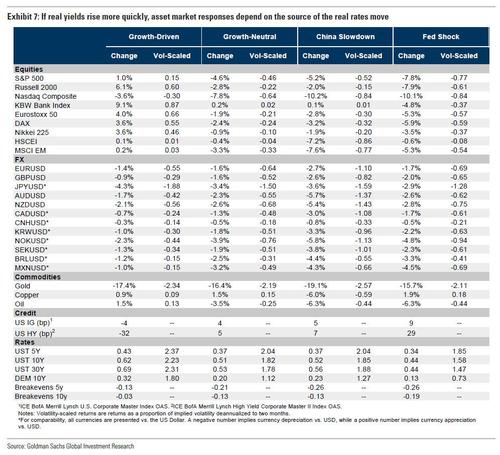 Some final thoughts from Goldman:

Both the historical episodes and the scenario analysis point to similar conclusions for portfolio construction. Even a sharp rise in real rates that is driven by an increase in growth expectations—the version of this risk that is most consistent with our forecasts—is more likely to flatten overall equity returns than to lead to a sustained correction. It would, however, likely lead to pressure on the Nasdaq/tech complex and outperformance in banks and other more cyclical areas within the US market. It could also justify a tilt towards non-US developed market indices (currency-hedged).

Rising real rates driven by worries over more hawkish monetary policy—less likely in our view, but possible through miscommunication—would risk more generalized pressure on equities and credit. EM assets would likely also see more pressure, though it is a mix of rising real rates and slowing China growth that is the highest-risk scenario for this group. The most obvious forms of protection against this kind of monetary policy risk, as we have said before, are likely to come from paying rates or seeking options on higher US yields. Given the tendency for the curve to flatten in these situations, the belly of the US curve may be the most obvious point to position for this outcome. Tilting equity portfolios towards less rate-sensitive areas is another way of “internalizing” this risk.

Positioning for USD strength is another way of protecting against the possibility of this outcome. Unlike rates hedges, long USD positions may also offer protection against other kinds of risk-off events. But in general, we see the FX moves in response to a real rate shock as likely to be quite a bit smaller than for rates themselves on a volatility-adjusted basis.3 And, as the 2015 episode illustrates, a move in real rates that is driven not by the Fed, but by the ECB or another central bank could see the USD depreciate. $/JPY and gold are likely to respond more consistently to rising real rates and offer the most appealing non-rate options for positioning for or hedging this outcome.

Of course, Goldman is just speculating here as nobody knows what will happen this time as never before has the economy needed a $120BN monthly injection to survive. One thing we do know is that nobody is more screwed than the Fed, because if yields are soaring with the taper still two years away…

Yields going apeshit and taper is still 2 years away.

Good luck with that

… there is no way the Fed will ever be able to stop injecting unprecedented amount of liquidity into the system. Ever.