Authored by Sven Henrich via NorthmanTrader.com,

Money printing galore, dollar in the tank, everything rallying, except Gold. What gives? What’s with the sad face? 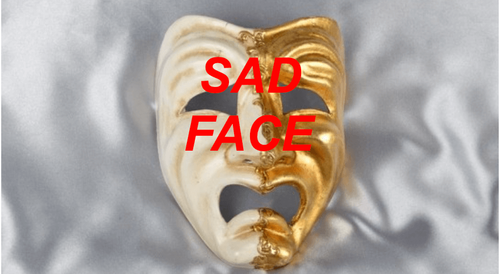 Gold no longer the hedge, all aboard the crypto train instead? Certainly looks that way.

Let’s an have updated technical look at Gold.

In November I last commented on Gold publicly in “Key time for Gold”. In the article I made the point that Gold had reached key technical support and was poised for a rally while outlining some concerns about the larger backdrop.

One of the charts I highlighted was this weekly chart which pointed to key technical support at the .382 fib: 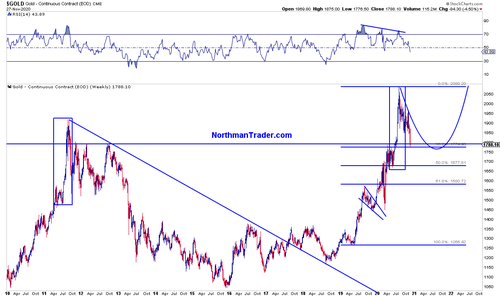 The chart also highlighted the prospect for months of price chop that could well last the duration of 2021 into 2022.

Following the article Gold saw indeed a near $200 rally into the $1960 area. So the technical support had held and was indeed a tradable bounce level. Yet that rally fizzled and now Gold actually made a slight new low versus last November: 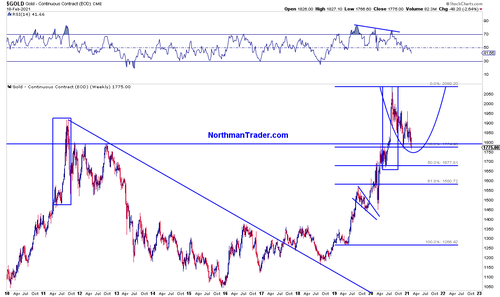 In process the 200MA that also aided in support previously has since failed to be support and instead has become resistance: 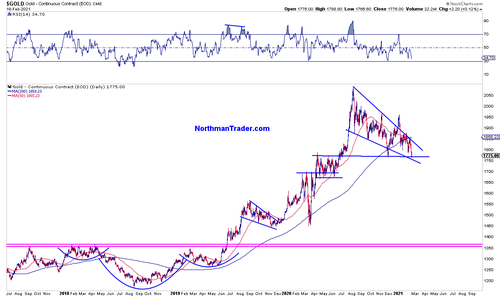 Worse it appears the 50MA is now crossing over the 200MA, a bearish cross. Sad Face indeed.

Yet the chart still shows potential for a larger bull flag although I have to see I don’t like chart patterns that have too many pokes above and below, but fake outs do happen. Certainly the temporary breakdown in November didn’t preclude a rally and yet the breakout in early 2021 didn’t sustain either. For now let’s say the pattern is still there, a bit shaky perhaps, but not invalidated either.

Clearly Gold as once again reached key support. Yet the flag has room lower although a break below the .382 fib would likely invite more selling.

It is the weekly futures chart that offers a more positive prospect for Gold bulls:

This chart suggests a bit more lower risk for Gold while leaving room for a sizable rally for Gold yet to emerge in due time. Remember patterns are not confirmed until a break out of the pattern is confirmed and not invalidated until decisively broken.

A confirmed break out of the pattern would suggest a move back to highs or new highs. A break down would make for more sad faces.

$1750/51 (fake downs not excluded) appears to be the key zone Gold bulls must defend should the metal drop to there.

Note also the RSI is getting pretty oversold, but also has room lower. A move to 1750/51 would get the RSI even further oversold and price is into a key support zone. Not predicting Gold will drop to there, just highlighting the risk level.

From my perch Gold is doing exactly what I’ve been saying to our Market Video subscribers for months: That Gold would likely frustrate holders for months and it is doing a good job at that.

Bottomline: Gold is yet again at an area of key support, its bullish pattern still intact, but it needs to prove itself in a major way and soon so as technicals have weakened.